Home > “I didn’t know West Nile virus could keep you from walking”: Cleveland woman astonished by damage one tiny mosquito can do
Back to top

“I didn’t know West Nile virus could keep you from walking”: Cleveland woman astonished by damage one tiny mosquito can do

“I didn’t know West Nile virus could keep you from walking”: Cleveland woman astonished by damage one tiny mosquito can do 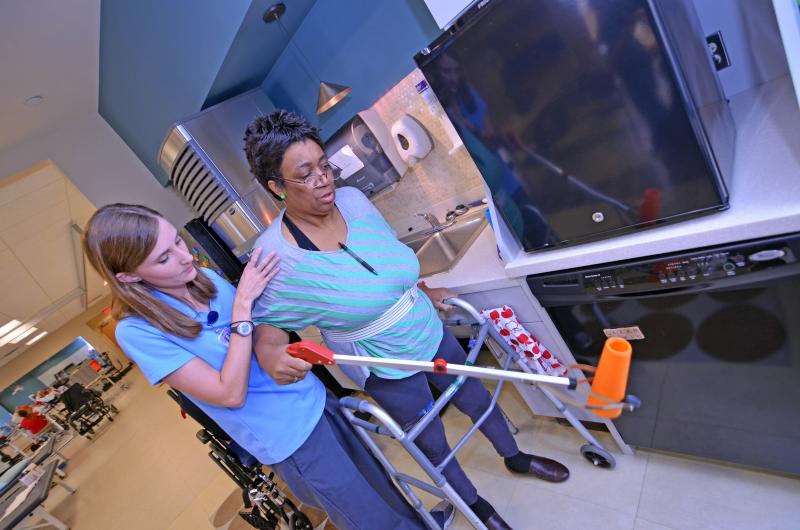 Emily Duggar, an occupational therapist at Methodist Rehabilitation Center in Jackson, helps Pearl Thomas ready for a return to her Cleveland home by teaching her how to use a reaching tool to retrieve items in her kitchen. 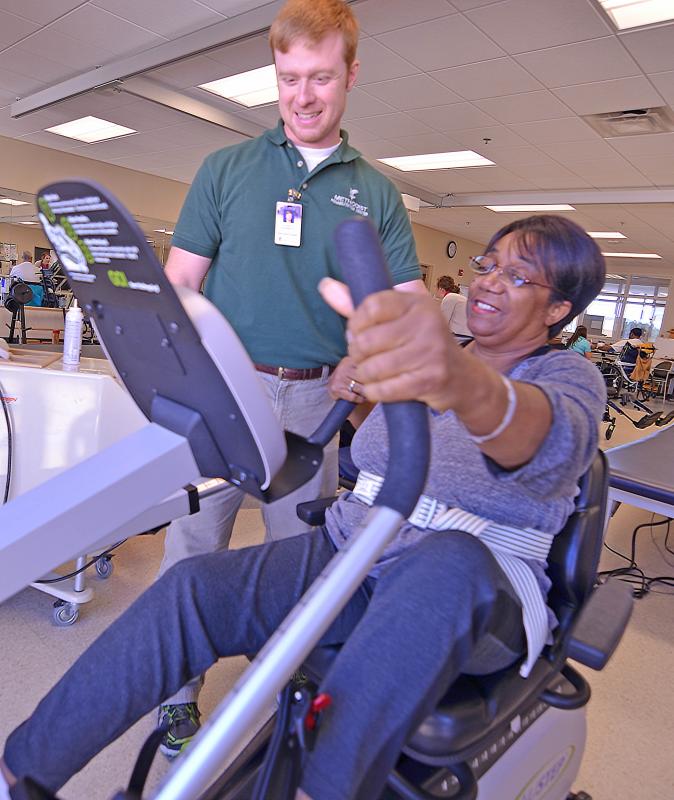 Alex Touchstone, a physical therapist at Methodist Rehabilitation Center in Jackson, guides Pearl Thomas through a therapy workout designed to improve her leg strength and endurance.

For Pearl Thomas, it all started with an achy mosquito bite that left her itchy from her waist to her toes.

Next came cold symptoms, followed by fever, sweatiness and a searing pelvic pain that sent the Cleveland resident to the ER on Oct. 4.

When her legs gave way the next day and she fell flat on the floor, the 59-year-old thought it might be complications from a pain shot she’d received at the hospital.

She didn’t suspect anything serious until she returned to Bolivar Medical Center on Oct. 7. After further testing, doctors decided Thomas needed an ASAP transfer to the University of Mississippi Medical Center in Jackson.

“They wanted to put me on a helicopter, and I’m afraid of flying,” she said. “I kept saying: But I’m not critical.”

Turns out Thomas was sicker than she knew, the victim of a disease that has killed five Mississippians this year and sickened over 50.

“They said we believe it’s West Nile Virus infection. And I said: Like from a mosquito bite?

“Who would ever know I’d have something like this. I didn’t know West Nile virus could keep you from walking.”

Neither did the rest of the world, until two scientists at Methodist Rehabilitation Center in Jackson made a stunning discovery.

In 2002, MRC researchers Dr. Art Leis and Dr. Dobrivoje Stokic  of Ridgeland were the first to report a link between WNV and a polio-like paralysis.

In the dozen years since, MRC has evaluated and treated more than 120 WNV patients and research staff has published 17 scientific papers on the topic and made numerous presentations at national and international conferences.

This year, they established the WNV Research Network with the support of $615,000 in gifts and pledges to MRC’s Wilson Research Foundation.

“Our clinical observations are driving the laboratory research,” said Stokic, administrative director of research at MRC. “This should speed up the process to unlock the mysteries of neurological damage and identify potential targets for useful therapies.”

The USM team, led by Fengwei Bai, Ph.D., is assessing the virus’s attack on the nervous system during the brief time it’s alive in the body. At UMMC, Parminder J. Vig, Ph.D., is directing an effort to determine the damage that can occur even after the virus is dead.

One focus of the research is the role of the brain protein S100B. Upon testing people who had recently contracted WNV, researchers found abnormally high levels of S100B in their blood and spinal fluid.

“While S100B in small amounts is necessary for normal brain function, we suspect that increased levels may be harmful, particularly in the long run,” Stokic said. “After we better understand the cascade of events leading to abnormal production of S100B and how it affects brain tissue, our hope is to find a way to interrupt that sequence and prevent damage.”

Leis said one theory is that humans react to S100B by producing antibodies. “We hypothesize that these antibodies may go from the blood back into the brain tissue and perhaps cause damage. We will test these hypotheses with the help of UMMC and USM.”

Stokic said UMMC researchers already have made a remarkable discovery. They found that even after the West Nile virus is dead, remaining viral pieces can stimulate production of S100B in brain cells of experimental animals.

“We still don’t know how long S100B remains in the blood of people infected,” Stokic said. “Clinical studies are underway where we will bring people back over a three month period to repeatedly analyze their blood.”

Leis said patients with severe cases of WNV receive mostly supportive treatment while in the hospital—IV fluids and nutrition, prevention of secondary infections and good nursing care. He said high dose steroids are sometimes in order if a patient starts having new problems two weeks or more after the onset of WNV symptoms. That’s often a sign the body’s immune system is attacking itself.

Intensive inpatient rehabilitation also helps, and Thomas said she was glad to know MRC had expertise in treating the disabling effects of WNV infection.

She still can’t believe how quickly the virus took away her ability to walk. “That was petrifying for me,” she said. “Can you imagine going to the doctor, taking some medicine and the next day you can’t walk and hit the floor?”

Thomas arrived at MRC on Oct. 16 and has since made “great progress” with the staff’s help. “They know every rehab technique to help you get back to where you want to be,” she said.

With MRC physical therapist Alex Touchstone, Thomas mainly worked on strengthening her legs and improving her endurance and form so she could safely return to walking.

“In the beginning, she could go around 100 feet with a walker, but her right leg would buckle and she would need to sit down,” Touchstone said. “Now, she can go over 600 feet with the walker, and she’s a lot safer.”

Occupational therapist Emily Duggar helped Thomas with the skills she would need to live independently once she returned home—like positioning bath and grooming products for easy access or using a reaching device to safely retrieve items from the floor or kitchen cabinets.

“We practiced here in our kitchen, getting things out of cabinets or heating things in the microwave,” Duggar said. “We also worked a lot on self-care activities, and we got her set up with equipment she would need to take home.”

Thomas wants nothing more than to return to her job in community education and marketing for Haven Hospice Care in Cleveland.  And as she got ready to leave MRC on Nov. 7, she had plans to take advantage of the hospital’s outpatient therapy, too.

“I’m confident that I can continue to do better,” she said. “They’ve got the right type people working here.

“You’ve got to like people and know how to be gentle with folks who are sick and in pain. And they have all the techniques to get you back where you need to be.”