Home > “I got lucky”: Jackson nurse grateful for West Nile virus expertise of Methodist Rehab researchers
Back to top 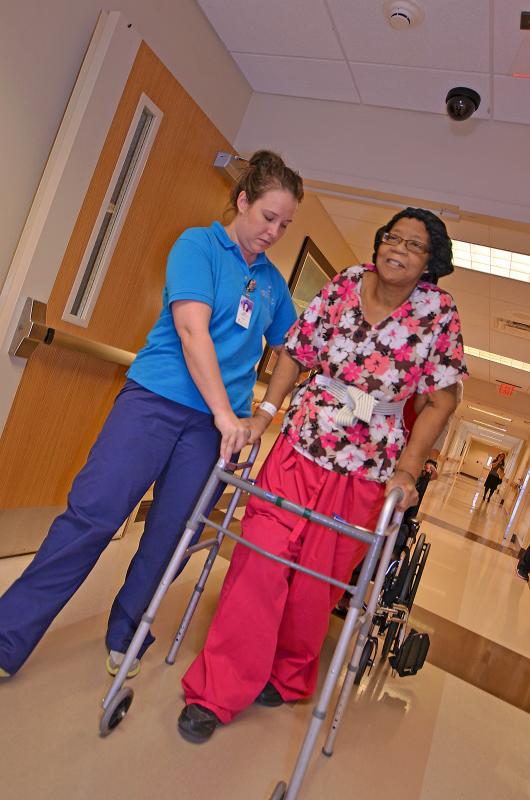 At first, West Nile virus survivor Carolyn Lee of Jackson was too weak to even roll over in bed. But after working with Methodist Rehabilitation Center physical therapist Erin Rigby, at left, Lee built up to being able to pace 120 feet with the aid of a walker.

Left confused by brain swelling caused by West Nile virus, the mother of three didn’t even recognize her daughters.

“My prognosis was not good,” said the 58-year-old Jackson nurse. “The doctors said I had stayed under a long time and would probably come out with brain damage and be paralyzed.”

So now that she’s talking and walking, Lee feels grateful to have come so far. “I got lucky,” she said. “West Nile virus is a very serious disease.”

No one knows that better than researchers at Methodist Rehabilitation Center in Jackson, where Lee recently spent almost a month in therapy.

In 2002, MRC scientists Dr. Art Leis and Dr. Dobrivoje Stokic of Ridgeland were the first in the world to report a link between WNV and a polio-like paralysis.

In the dozen years since, MRC has evaluated and treated more than 120 WNV patients and research staff has published 17 scientific papers on the topic and made numerous presentations at national and international conferences.

This year, they established the WNV Research Network with the support of $615,000 in gifts and pledges to MRC’s Wilson Research Foundation.

The USM team, led by Fengwei Bai, Ph.D., is assessing the virus’s attack on the nervous system during the brief time it’s alive in the body. At UMMC, Parminder J. Vig, Ph.D., is directing an effort to determine the damage that can occur even after the virus is dead.

“Our clinical observations are driving the laboratory research,” said Stokic, administrative director of research at MRC. “This should speed up the process to unlock the mysteries of neurological damage and identify potential targets for useful therapies.”

One focus of the research is the role of the brain protein S100B. Upon testing people who had recently contracted WNV, researchers found abnormally high levels of S100B in their blood and spinal fluid.

“While S100B in small amounts is necessary for normal brain function, we suspect that increased levels may be harmful, particularly in the long run,” Stokic said. “After we better understand the cascade of events leading to abnormal production of S100B and how it affects brain tissue, our hope is to find a way to interrupt that sequence and prevent damage.”

Leis said one theory is that humans react to S100B by producing antibodies. “We hypothesize that these antibodies may go from the blood back into the brain tissue and perhaps cause damage. We will test these hypotheses with the help of UMMC and USM.”

Stokic said UMMC researchers already have made a remarkable discovery. They found that even after the West Nile virus is dead, remaining viral pieces can stimulate production of S100B in brain cells of experimental animals.

“We still don’t know how long S100B remains in the blood of people infected,” Stokic said.

“Clinical studies are underway where we will bring people back over a three month period to repeatedly analyze their blood.”

Many of the study participants are members of the state’s West Nile Virus Support Group, which meets quarterly at either MRC or in Hattiesburg. Like Lee, who attended her first meeting on Oct. 24, most attend the group hoping to learn more about the long-term ramifications of the still mysterious disease.

As a nurse, Lee said she already knew how WNV was transmitted. But she never imagined how devastating a tiny mosquito bite could be.

“On Aug. 30, I had diarrhea and went to sleep,” she said. “And the next thing I remember is waking up on Sept. 16 in the ICU unit at Baptist Medical Center saying: ‘Why am I here?’ Dr. Leis said I had encephalitis, that‘s why I was in a stupor.”

Lee was already debilitated following complications from a major surgery in September, 2014, and her weakened immune system likely made her more susceptible to a severe case of WNV.

“They said my temperature got to 104 and my blood sugar was 400,” said Lee, who has had diabetes for 23 years. “My mother said a doctor at Baptist said this looks like West Nile virus to me. They did the tests, and that’s when I was diagnosed.”

Leis said patients with severe cases of WNV receive mostly supportive treatment while in the hospital—IV fluids and nutrition, prevention of secondary infections and good nursing care. He said high dose steroids are sometimes in order if a patient starts having new problems two weeks or more after the onset of WNV symptoms. That’s often a sign the body’s immune system is attacking itself.

Intensive inpatient rehabilitation also helps, and Lee said she was glad MRC staff had expertise in treating the disease. But she worried whether she had the stamina to endure the therapy gym.

“I thought: Oh, they are going to work the devil out of me. But they snuck it in on me. I didn’t even realize I was working. They’re patient and take their time.”

Lee said the nursing staff even showed her some professional courtesy when she insisted on doing things her way. “They worked with me. They’re excellent.”

Early on, Lee said she was so weak she couldn’t turn over in bed, her arms felt like they weighed 20 pounds and she couldn’t lift her legs to stand.

Now, she can pace 120 feet with the aid of a walker, and she’s looking forward to making more progress with the help of MRC’s outpatient staff. Still, she knows she’s far from her old self.

“A person with West Nile may look like they’re strong, but the weakness is real,” she said. “And it takes a lot to get used to the fact that you can’t do things you did before.”