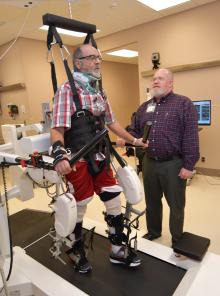 Neurologist Keith Tansey, right, watches as Steve Webster of Flora steps with the aid of the LokomatPro FreeD as part of a study being conducted in Methodist Rehabilitation Center’s NeuroRobotics Lab. As president of the American Spinal Injury Association for the last two years, the senior scientist at MRC has used his background of lab research, human study and clinical care to promote increased interactions between researchers who study spinal cord injury and clinicians who treat SCI patients.

As he winds up his two-year tenure as president of the American Spinal Injury Association, Dr. Keith Tansey of Ridgeland, Miss., can look back on a number of notable initiatives.

But he’s probably proudest of ASIA’s push to increase interactions between researchers who study spinal cord injury and the physicians who treat SCI patients.

As a neurologist who has a Ph.D. in spinal cord physiology, Tansey uniquely understands the potential of such collaborations. Indeed, it’s what brought the physician-scientist to Mississippi in 2016.

“I was looking for a way to continue my three-pronged approach of basic lab research, human study and clinical care,” Tansey said. “And I found Jackson has top-notch scientists and a human laboratory capacity that’s only present in a handful of places in this country.”

Today, Tansey serves as a senior scientist in the NeuroRobotics Lab of the Center for Neuroscience and Neurological Recovery at Methodist Rehabilitation Center, a professor in the Departments of Neurosurgery and Neurobiology and Anatomical Sciences at the University of Mississippi Medical Center and a physician-scientist for the Spinal Cord Injury Medicine and Research Services at the G.V. (Sonny) Montgomery Veterans Administration Medical Center.

It's not the bio of most ASIA presidents. “ASIA used to be mostly rehabilitation clinicians delivering care,” Tansey explained.

But with time, and under his leadership, there’s growing awareness of the benefits of welcoming researchers and other SCI experts to the fold.

“Keith is our bridge,” said ASIA Executive Director Patricia Duncan. “All his colleagues from both sides have the utmost respect for him. He always goes toward the future and what he can do to make things better for patients, as well as science.”

To encourage the integration of novel and important research areas at ASIA’s annual meeting, Tansey has underwritten a new ASIA award to recognize translational research and human neuroscience studies (TRoHNS Award). It’s part of a trend toward an expanded award system for ASIA participants that includes recognition for therapists and physician trainees, as well as physicians and researchers.

“They are not set up so much to accommodate people with spinal cord injury,” Tansey said. “Since we’re all in the same hemisphere, we thought we’d reach out a little. Members of our new Americas committee have traveled to Uruguay and Ecuador to support the development of improved SCI care there.”

For his swan song as president, Tansey worked with ASIA’s Program Committee to locate ASIA’s 2019 Spinal Cord Injury Summit in Hawaii. He favored Waikiki for the April 2-5 conference, told the speakers to wear Hawaiian shirts and even arranged for a luau for the Presidential Reception.

Fortunately, he also devised an ambitious ”state of the science” lineup designed to keep attendees from skipping out to the beach.

He’ll have leading-edge experts discuss how to quickly translate lab discoveries to clinical care, use large volumes of data to improve clinical care and design animal and human studies to better complement each other.

Other session topics include spinal cord learning, spinal cord injury guidelines for psychologists, social workers and counselors, the latest innovations in imaging methods and biomarkers and even an “autopsy” of a failed clinical trial.

The summit will end with a symposium devoted to one of the field’s most talked-about topics—spinal cord stimulation and neuromodulation.

“This will be the first major societal meeting with a half day devoted to this technology,” Tansey said.

The presentation is a response to hype generated last year when four paralyzed people regained some movement with the aid of implanted stimulation devices paired with intense rehabilitation therapy.

“That’s why we’re having the symposium so we can critically discuss the technology rather than celebrating a handful of discoveries,” Tansey said. “We’ve heard the marketing. Now, let’s kick the tires a little bit.”

“I want a clinician to be able to tell whether a patient will or won’t be a good candidate for neuromodulation. We need to take a step back and better define the patient, develop more subtle measurements and build on that.”

Tansey is never bashful about expressing his opinion, and he admits he has talked himself into many a project. “If you complain about a squeak, you get handed the oil can,” he jokes.

But his forthrightness has hardly limited Tansey’s rise in the SCI field.

In addition to being president of ASIA and one of the editors of a textbook "Neurological Aspects of Spinal Cord Injury,” he also has been named a fellow of ASIA and the American Society for Neurorehabilitation.

As someone who played a major role in recruiting Tansey to Mississippi, Dr. Dobrivoje Stokic likes that Tansey has become nationally prominent in his field.

“Dr. Tansey is a great asset to our program because he helped us expand into new areas of research and strengthen our collaboration with UMMC,” Stokic said.

With his ASIA presidency behind him, Tansey will have more time to devote his energies to his own research and clinical pursuits. But he’ll leave the post with mixed feelings.

“I will miss the opportunity to make an impact on the field through the power afforded to the presidency,” he said. Still, it’s a given he’ll stay focused on fostering breakthroughs in SCI care.