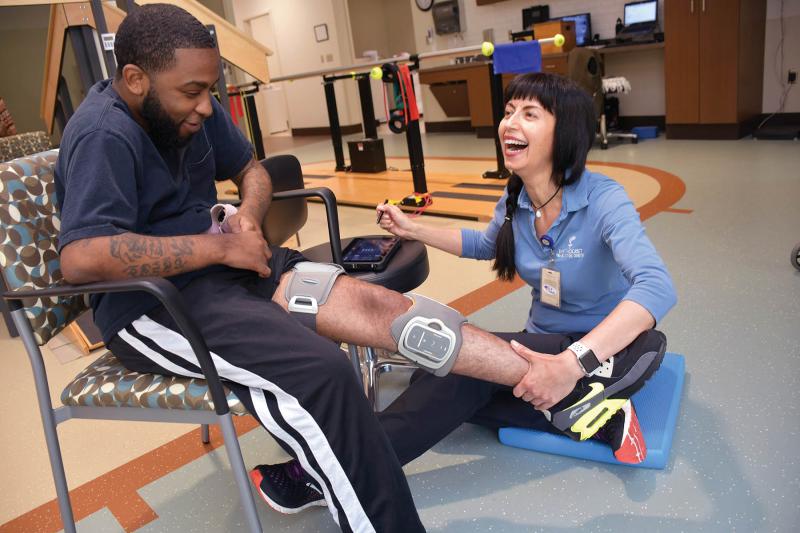 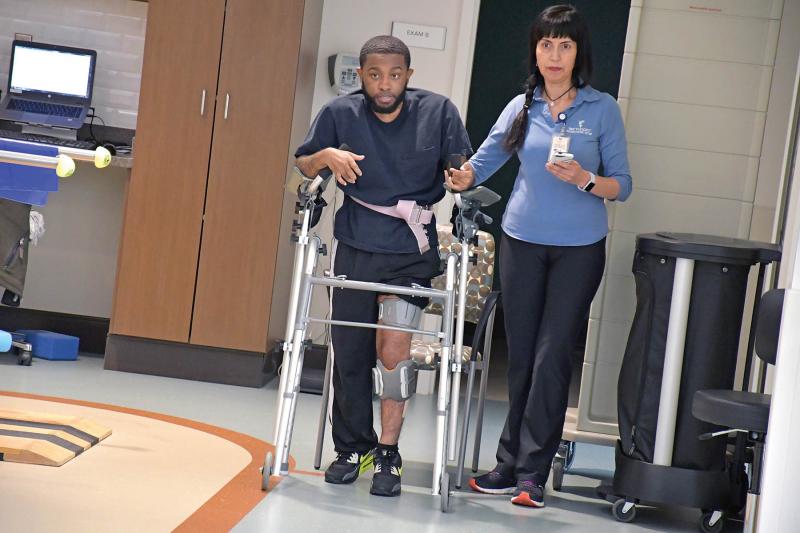 It’s been over seven years since Stevelyn Robinson was paralyzed in a school bus crash, and he hasn’t stopped fighting. He continues to progress through regular physical therapy at Methodist Outpatient Therapy in Ridgeland.

With the help of a walker, the Winona native walked across the stage at his 2016 graduation from Holmes Community College. Now a student at the University of Mississippi, he is working hard so he can do the same again.

“We’re working on my strength and endurance so hopefully I can walk at my graduation from Ole Miss, too,” Robinson said. “My estimated date is May of 2021.”

He will have some extra help this time—Robinson was just fitted with a Bioness L300 Go, the latest iteration of Bioness’ advanced devices designed to control foot drop.

“Foot drop” is a general term for any gait abnormality that includes problems with lifting the front part of the foot.

“It can be caused by a wide array of injuries and illnesses—traumatic injury, spinal cord injury, multiple sclerosis, cerebral palsy, stroke—to name a few,” said Taylor Hankins, a certified orthotist/prosthetist at Methodist Orthotics & Prosthetics in Flowood, the exclusive provider for L300 Go in the Jackson metro area.

Hankins has worked with many patients with foot drop.

“In our central nervous system, there’s a connection between our brains and our lower extremity muscles,” he said. “Foot drop is due to a disruption between those neurological signals.”

“It’s a cuff that straps right around the lower leg, and it stimulates the peroneal nerve, which activates the muscles in the lower leg which lift the foot up,” Hankins said. “A traditional orthotic brace, like an ankle-foot orthosis (AFO), locks them into a certain position to block foot drop. The Bioness lets them use their muscles, which is a lot more natural, because traditional bracing can make muscles atrophy from not being used and can also restrict blood flow. Plus, you have to wear this bulky brace that may not work with your normal shoes.”

Robinson had benefited from using a previous version of the Bioness in his therapy.

“With older models, you had to wear a cuff around the leg, a sensor piece in your shoe, and a Bluetooth controller—it was a three-piece system,” Hankins said. “And you were limited to one pair of shoes you put the sensor in. The L300 Go has no sensor, so you can wear any shoes you want, or you can even go barefoot.”

In place of the Bluetooth control unit, the L300 Go has controls on the device itself, as well as an optional phone app. And in lieu of the sensor, it uses a 3-axis gyroscope and accelerometer to track the user’s movement in 3D space. This is especially beneficial for the more severely impaired.

“It could be a challenge for many patients to have the range and strength in their ankle to be effective in turning the device on and off with the sensor,” said physical therapist Patricia Oyarce, who has been working with Robinson since 2013. “This upgraded version has been a lifesaver for Stevelyn.”

“Without the sensor giving me trouble like the old one, I can walk faster and better without getting tired quickly,” Robinson said. “With the old one, I had to put a lot of pressure on my heel for it to work. It took a lot out of me to lift my left leg to step down hard enough. Now I just have to flex my knee and the machine automatically works.”

Oyarce has recommended Bioness devices for many patients in her role at Methodist. Previously, she worked with a representative from Bioness who came to the clinic to screen patients.

“I’ve worked with many patients whom Bioness has helped get back into the community and what they love,” said Brittany Rose, Bioness’ clinical specialist for the southeastern U.S. for the past four years.

“Unfortunately, the Bioness is not right for everyone, that’s why we do the screening,” Hankins said. “FES can be dangerous for someone with a pacemaker, for instance. You also have to have the proper range of motion. Sometimes a traditional orthotic device will be a better fit. But we don’t charge for these evaluations. You don’t need a referral, diagnosis or prescription to schedule one.”

If a patient is a good fit for the device, then they should see a physical therapist for three to four weeks.

“We gradually increase the time that they wear it,” Oyarce said. “They have to develop a tolerance to the electrical stimulation.”

The L300 Go costs around $6,000, but there are several ways to secure funding for the device.

“If they have vocational rehab, or worker’s comp, or are a veteran, those are all solid funding sources,” Rose said. “Some private insurances will also help pay for it.”

Robinson now has his own Go that he can wear at home for continued exercise, and he is optimistic that it will help him continue to progress.

“I can walk longer distances without having to take a break,” he said. “Before, I had to stop a lot. But now I’ve gotten up to 127 feet at a single time with the new model.”

'The Lord was watching out for me': Flora hunter grateful to be walking again after suffering several fractures in 22-foot tree stand fall
'There he is, that's my kid': Picayune family counting blessings as son overcomes brain injury suffered in hit and run
Stroke
‘Every muscle in my body was paralyzed’: Methodist Rehab helps John ‘Bones’ Cossar reach goal to play golf again
‘Such a blessing’: For spinal cord injury survivor Brad Stubblefield and wife Kristan, having children has brought joy along with a unique set of challenges
Web design and hosting by U.S.NEXT