Home > 'There he is, that's my kid': Picayune family counting blessings as son overcomes brain injury suffered in hit and run
Back to top

'There he is, that's my kid': Picayune family counting blessings as son overcomes brain injury suffered in hit and run

'There he is, that's my kid': Picayune family counting blessings as son overcomes brain injury suffered in hit and run 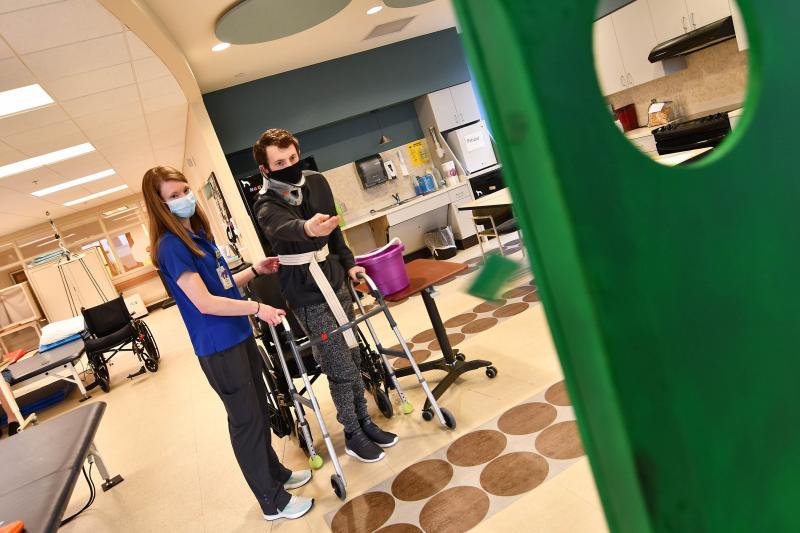 Anna Sumrall, a physical therapist at Methodist Rehabilitation Center in Jackson, monitors Gavin Miller’s standing balance and endurance as he tosses bean bags through a target. Gavin was hit by a car on Nov. 17 as he walked to a school bus stop. The impact bruised his brain, lacerated his spleen and kidneys and fractured his right hip socket and C-6 and C-7 vertebra. 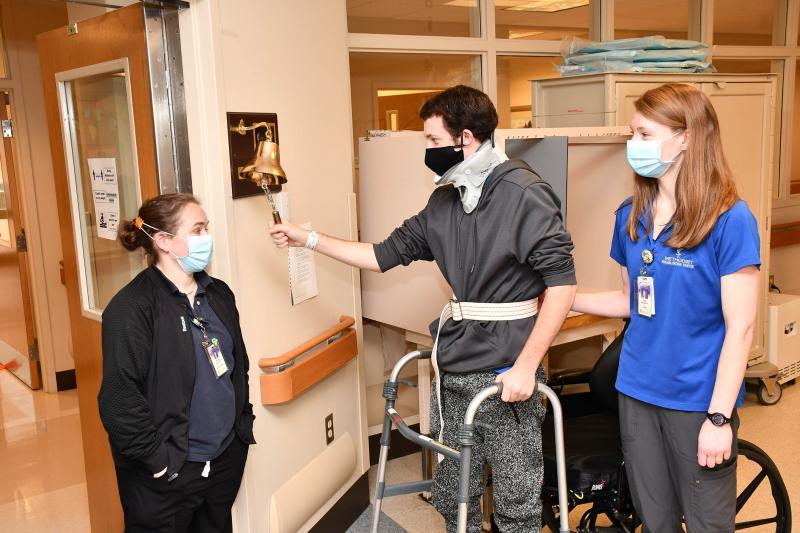 Gavin Miller, center, rings the bell to signify his last day of therapy at Methodist Rehabilitation Center in Jackson. Cheering him on are occupational therapist Bonnie Lahuta, left, and physical therapist Anna Sumrall. 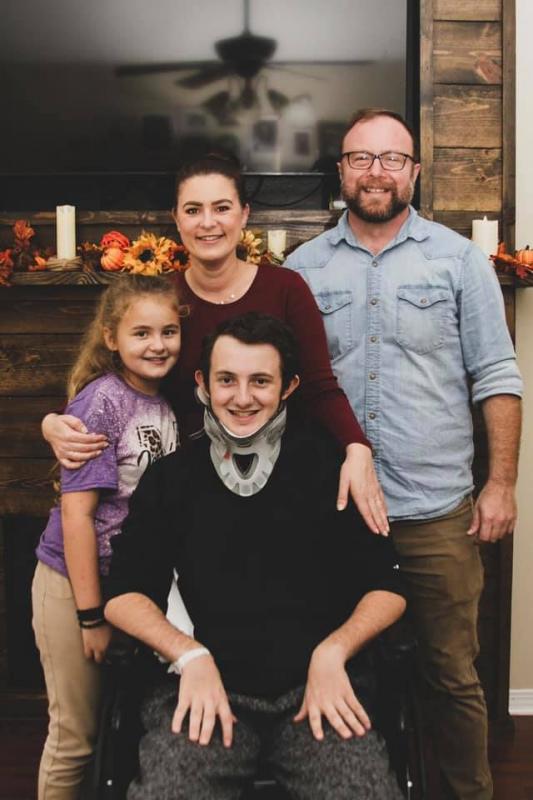 The Miller family couldn’t be happier to have Gavin home again, after a month away recovering from his injuries. From left are his sister, Piper, his mother, Hesper, and his father, John. (Photo by family friend Brandy Pittman.) 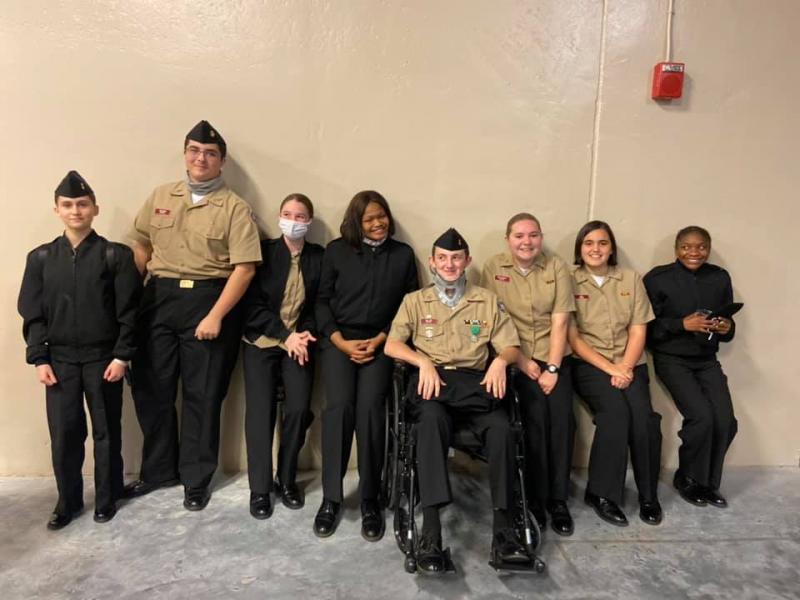 Nov. 24 was the most thankful Thanksgiving ever for the family of Picayune’s Gavin Miller.

Just a week before, a hit-and-run driver crashed into the 17-year-old as he was walking to a school bus stop.

A resulting head injury left his mother, Hesper Miller, worrying: “Is he going to be like himself afterwards?”

“He’d wake up, and it would just be a blank stare,” she said. “Thanksgiving day was his first good day. He was awake and alert and I said: ‘There he is, that’s my kid.’ He was making little jokes, and I was so happy.”

It was the morning of Nov. 17 when Miller fielded a heart-stopping phone call.

“They said, ‘We don’t know what happened, but he was found in a ditch with lots of plastic around him.’ They didn’t say anything about the seriousness. They said it’s possible he has a head injury.”

A licensed practical nurse at Pearl River County Hospital and Nursing Home, Miller tried to stay positive as she headed to a Picayune hospital. Then she saw a helicopter overhead.

“I knew: ‘Oh my God, this is bad,” Miller said. “I got to see him a second. They said he had a brain injury, and they were flying him to a hospital in Jackson.”

At first glimpse, Gavin’s injuries weren’t that apparent. “He had some scratches,” Miller said.

But at the University of Mississippi Medical Center in Jackson, doctors detailed the damage that had been done when Gavin was tossed onto the hood of the SUV and slammed his head into the windshield.

The impact fractured his right hip socket and his C-6 and C-7 vertebra, lacerated his spleen and both kidneys and bruised his brain.

“They told me his first night in ICU that we won’t know what deficits he has until he wakes up,” Miller said.

But on Thanksgiving, Gavin was cognizant enough to survey damage to his own body and utter one of his signature phrases.

“He was still having short-term memory issues, but I was like: ‘He’s back,’” Miller said.

After leaving UMMC, Gavin arrived at Methodist Rehabilitation Center in Jackson on Dec. 1.

Miller admits it wasn’t her first choice among four Mississippi hospitals presented to her. “I picked Forrest General Hospital in Hattiesburg and Encompass Rehabilitation Center in Gulfport because they’re closer to home.

“While we were waiting to hear back from them, one of my coworkers said the other places weren’t good enough, and we needed to go to Methodist. I also have a friend whose son was at Methodist 17 years ago. She called me and told me I really needed to look into going to Methodist.”

So when the other two hospitals rejected Gavin because of his age, Miller came to see it as a blessing in disguise.

“I was upset at first about not being closer to home,” Miller said. “Now I’m glad we got turned down. I think Methodist Rehab sets the standard. Everything from the doctors to housekeeping to security is so nice. It’s therapy based, and it’s good and it’s aggressive. Every day there is an improvement.”

Gavin managed the progress despite working with a major impediment. Until his hip healed, he wasn’t allowed to put weight on his right leg, a hindrance to his walking efforts.

His balance was also off, making him a fall hazard. And he no longer had the strength of a teen who bragged of doing a 4-minute, 42-second mile.

“He lost a lot of muscle and had some issues with motor control,” said MRC physical therapist Anna Sumrall. “When he got here, he was not able to pick up his toes on his left foot. We did some electrical stimulation on his muscles, and now he’s able to do it.”

While Sumrall focused on getting Gavin mobile again, occupational therapist Bonnie Lahuta and OT student Baleigh Gooch worked on his self-care tasks, such as dressing and bathing.

“As far as being independent, he’s come a long way,” Gooch said. “At first, he couldn’t get from his wheelchair to the therapy mat without help.”

Lahuta said he was also lax about safety concerns, so improving his awareness of proper precautions became a big focus of his therapy.

During speech therapy, he also worked on his awareness in general. “With the brain injury, he did have some cognitive impairment,” said speech therapist Rachel Anderton. “But by the time he got to us, it wasn’t super severe.”

Anderton said she dedicated most of his speech sessions to increasing his attention and “executive function skills.”

“That’s his ability to problem solve and reason through things,” she explained. “I might give him a safety scenario and ask what he would do in that situation. We also worked a lot on attention during conversation. He would change topics so fast. We worked on that so he wouldn’t be all over the place.”

As he became more clear-headed, Gavin began renewing his reputation as a cut-up.

“He was fun to work with and kept things interesting,” Sumrall said. “He’s a jokester for sure. Every day, he would say: ‘Who knew walking could be so hard.’”

That happy-go-lucky attitude gave him an advantage over teens who often let their despair over a life-changing injury impede their therapy progress.

“He was able to see this as temporary,” Lahuta said. “For the most part, he’s going to go back to being a regular teenager.”

His therapists say his pre-injury youth and fitness level certainly helped his recovery. He was a gung-ho member of the ROTC unit at Picayune Memorial High School, determined to follow the family tradition of military service,

“I was in the Army and most of my family was in the Navy,” Miller said. But Gavin had his heart set on the Marines.

So he was amazed to learn he’d spent some of his hospital time thinking he was a fighter pilot. “Apparently, I shot down three planes,” he said. “It’s amazing what the mind can do.”

Gavin remembers none of it, but his family has filled him in on some of his more outrageous behavior. He thought he’d been bitten by zombies once and often fought to yank out various tubes while in ICU.

“It was scary,” Miller said. “I work in geriatrics and know nothing about head injuries. We didn’t know what to expect. I had to tell him a few times every day: Do you know where you’re at and why you’re here. He’d be surprised.”

Today, his short-term memory is on the mend. But Gavin says he’s fine with totally forgetting the details of his accident.

It happened early morning as he was walking to catch the bus. He was flung into a ditch after a driver crashed into him and left the scene.

“We found out later a man and woman were driving down the road and the man saw Gavin’s shoes in the road and saw Gavin in the ditch,” Miller said. “She called 911 and said the man prayed with Gavin.”

A photo of the offending vehicle was caught on school bus video. According to WLOX-TV, 22-year-old driver Kristin Pittman turned herself in that day and was charged with leaving the scene of an accident with injuries.

According to the National Highway Traffic Safety Administration, school-related pedestrian accidents aren’t uncommon. From 2006 to 2015, 102 pedestrians age 18 and younger died in school-transportation related crashes. Like Gavin, 36 percent were hit by vehicles other than a bus or school transportation vehicle.

But Gavin’s case, at least, seems headed for a happy ending. He is nothing if not determined.

As he got ready to leave Methodist Rehab on Dec. 15, Gavin admitted to mixed feelings. ‘I’m going to miss it,” he said. “MRC is a good place, and everyone’s super nice. But I like my house, too. I like my bed, my dog and my sister. I haven’t seen her in a month. And she has no one to annoy.”