Home > Stepping stones: Through inpatient, outpatient therapy and the Quest program at MRC, Justin McQueen of Moss Point fights his way back from a brain-injuring fall
Back to top 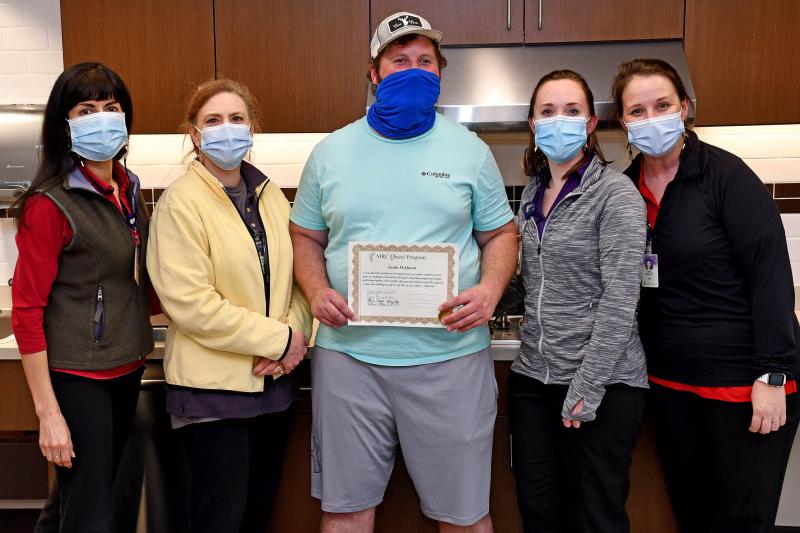 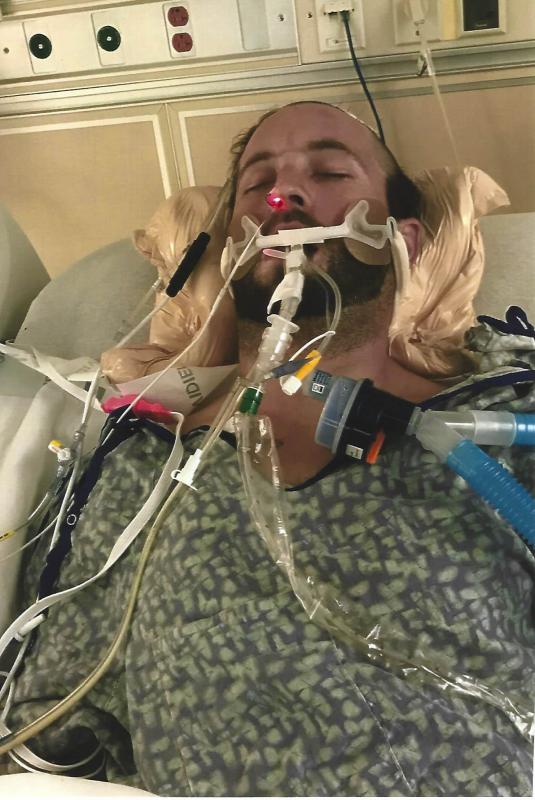 Justin McQueen spent 16 days in intensive care at the University of Mississippi Medical Center after a brain-injuring fall from a ladder at his job in November 2019. 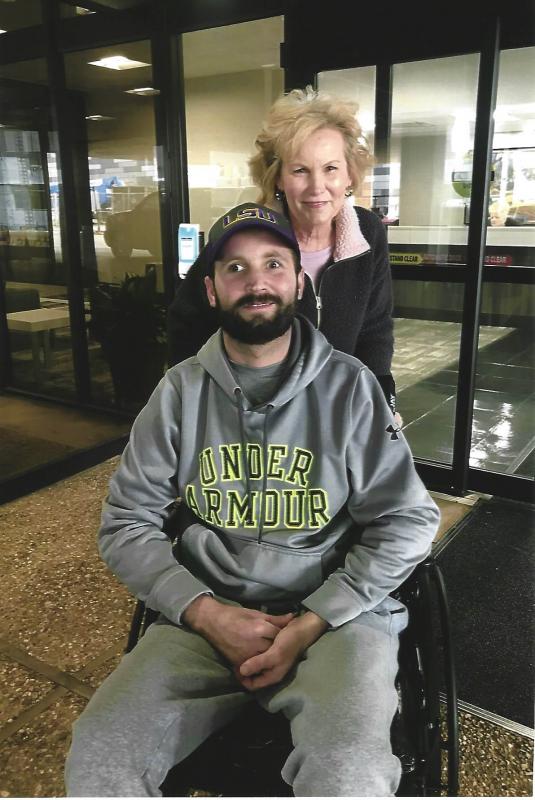 Justin McQueen is wheeled out the doors of Methodist Rehabilitation Center’s inpatient hospital in Jackson by his mother Tami McQueen, after completing three weeks of intensive therapy in January 2020. 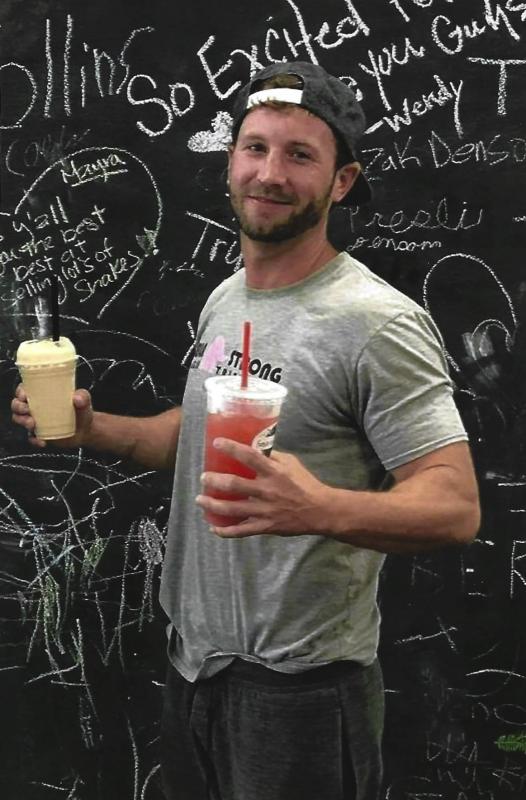 Justin McQueen shortly before his accident, a brain-injuring fall from a ladder in November 2019.

Justin McQueen of Moss Point has little memory of a year most people would like to forget.

The 32-year-old started 2020 recovering from a traumatic brain injury that left his memory of the year blank at worst and hazy at best.

In November 2019, he was doing some on-the-job training for a company that repairs refrigerated 18-wheelers. While working, he fell off a ladder and hit his head. He was taken home to try and sleep it off but couldn’t wake up and was rushed to the hospital. His brain was swelling, and he suffered a stroke. Doctors performed a procedure to relieve the pressure.

“They didn’t know if he was going to make it,” said his mother, Tami McQueen. “It wasn’t until a week later that he finally ‘woke up.’”

“I couldn’t talk or anything,” Justin said. “They asked if I could hear them and all I could do was give a thumbs up.”

Justin spent 16 days in intensive care at the University of Mississippi Medical Center. After doctors there performed a tracheostomy to get him off a ventilator, he spent another month recovering enough for therapy at Methodist Rehabilitation Center in Jackson.

Justin came to MRC on New Year’s Eve and says the three weeks he spent there is almost a complete blank.

“I only remember bits and pieces from then, like them helping me walk and holding me up on the bed because I couldn’t even sit up,” he said.

But his mother was there every step of the way to see how the hospital’s intensive therapy brought her son back.

“I had read online about how Methodist specialized in traumatic brain injuries,” Tami said. “You’ve got to get care, so you might as well get the best. And that’s what we felt like with Methodist. We really did.”

Traumatic brain injury can be difficult for the families of patients because it can lead to personality changes that, with the proper treatment, subside as the brain recovers. Confusion, agitation, combativeness and other unusual behaviors are common in severe injuries like Justin’s. And it was jarring for Tami to see the son she knew as sweet and cheerful experience all of those symptoms as he began his therapy at MRC.

“It was so opposite of his personality, that’s what upset me so much,” Tami said.

Physical therapist Kaitlin Snyder specializes in working with brain injury patients, so she knew his combative behavior was all part of his injury.

“The patients we have that are very agitated and confused like Justin was, it’s pretty common for them not to remember us,” Snyder said. “Or the things they did during therapy.”

Snyder recalls that Justin could become so agitated that he sometimes had to be restrained, and at times “he would swat at me.”

“I did? Do you remember that?” Justin asked his mother when told about it.

“Yes, you gave her a hard time, but she gave it right back in the therapy gym,” Tami said.

To calm agitated patients, Snyder looks to family members for things that might help ground them.

“One thing we did was to play music that he liked,” Snyder said. “It allowed him to get lost in the music and better participate, and he was less focused on being upset with what we were asking him to do.”

Justin’s right side was very weak due to both his injury and the stroke, so Snyder focused on getting him up on his feet as much as possible.

“In three weeks, he went from not being able to stand to walking with a walker with some balance assistance, so that was great progress,” Snyder said.

“We worked a lot of stretching that right arm because it was very tight,” she said. “It was challenging, because he would get agitated and try to protect his arm because it hurt. On day one, I was having to do everything for him, like getting him out of bed and getting dressed. By the time he left, he was making transfers and dressing with only minimal assistance.”

After inpatient therapy, Justin continued his recovery at Methodist Outpatient Therapy’s neurological rehabilitation clinic in Flowood. Although their home was on the gulf coast, mom wanted to make sure he continued his care at MRC.

“They did such an excellent job in inpatient that we wanted to stay up here,” Tami said. “I’m thankful that they were very patient, and they worked and worked with him. Everyone was so good with him. I was right there the whole time and I saw it all. And I wanted someone with that same kind of heart to take care of him.”

Luckily, a cousin lived in the metro area, which helped with travel concerns.

“We stayed with her at her house when he was doing therapy, and we would go home on the weekends,” mom said.

Justin was still struggling with symptoms of agitation and confusion, but he says this is when he starts to remember things more clearly—particularly his somewhat rocky relationship with his physical therapist Lisa Indest.

“We just did not get along,” he said. “But now I’m sorry. That wasn’t really me. It was the brain injury talking.”

Indest admits his behavior made his therapy challenging. But she focused on getting Justin walking, by using the clinic’s ZeroG Gait and Balance Training System. It’s a harness system attached to an overhead track that supports a patient’s body weight and provides a safe, controlled environment for practicing various therapy tasks. She says he was soon able to walk independently on a treadmill.

“He made dramatic progress while he was here,” she said. “His strength had improved, and his walking ability improved.  And his impulsivity and agitation had decreased significantly.”

It was during his time at the Flowood facility that the COVID-19 pandemic hit, adding somewhat to Justin’s frustrations. But it was mostly business as usual in the therapy gym, albeit wearing masks. The pandemic did affect Justin’s recovery outside therapy, however.

“They had told us to get him out shopping, get him around people, that that was good for him,” Tami said. “But all that got nixed because of COVID. The stores were closed, we had to stay home.”

In June, Justin was referred to MRC’s Quest program, which is housed at Methodist Outpatient Therapy in Ridgeland. It’s a comprehensive outpatient program for people with brain, spinal and other neurological injuries who wish to make a successful return to work, school or community life.

“Because of his improvement, we felt like he was a good candidate to return to some kind of work and more independence at home,” Indest said. “We felt like he had great rehab potential.”

Justin was now walking independently and was eager to progress further.

“He always said his goal was ‘to get back to doing something, anything,’” said Quest physical therapist Erin Perry. “He wanted to do any kind of work to feel productive.”

Perry says she concentrated on increasing his strength and endurance, with a session a week dedicated to aquatic therapy in the clinic’s indoor pool.

“I would often give him a list of activities and show him where they were, and he would have to follow my list without help,” Harris said. “Anything like that—which is more real world like what would happen in a job— is what we tended to focus on. Justin is such a hard worker and always surprised me. If he didn’t like doing something, he was going to tell you, but he would always do it anyway if it would help him in therapy.”

“We worked on his auditory processing, divided attention and memory strategies,” Means said.

“A big part of any job is processing directions from a supervisor, as well as managing distractions and multitasking. If you can’t process information as quickly or as much information as you feel like you used to, there are strategies for managing that. It’s all about finding what works. Justin really took to our journaling exercises and using a written planner for managing tasks, appointments and activities.”

During his time at Quest, Justin’s personality had finally returned to his good-natured self.

“We made it a point to really stress with him that he couldn’t go back to work with those kinds of previous behaviors,” Means said. “He responded so well to that, and he began to modify his behavior accordingly.”

Justin was all smiles and full of playful wisecracks at his Quest graduation party on Dec. 30, where he proudly announced that he was back to work and doing well.

“He is doing a work trial at Goodwill through the Mississippi Department of Vocational Rehabilitation,” Harris said. “They are supporting him there, and at the location there is a trainer who is observing him and working with him. Once the trial is done, they will help him get a job in the community.”

By March, Justin had completed the trial program but opted not to continue working there. As Harris said before, Justin is bluntly candid. Especially about how he felt about the job which included tasks like organizing and hanging clothes.

“To be honest, it was boring work,” McQueen said. “But I’m grateful for the job and will do everything I have to do to keep moving forward.”

His vocational rehab counselor is now looking for a new job for him that better fits his interests.

“Knowing him, if he was satisfied with it, that would really concern me,” Tami said. “He wants to be engaged and doing more mentally challenging work. So that’s a good thing. We know he’s still getting better. We know it’s a stepping stone.”