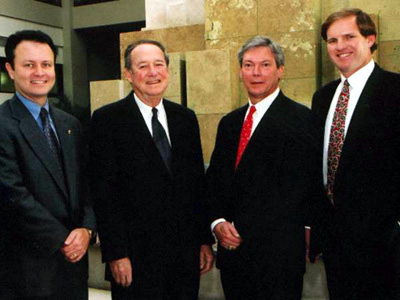 JACKSON, Miss.--Dean Miller has been named chairman of the board of trustees of Methodist Rehabilitation Center. Miller, a member of the board since ground was broken for the hospital in 1970, has been serving as vice chairman. The University of Kansas graduate, World War II veteran and oil and gas entrepreneur succeeds Earl R. Wilson who died in September. Wilson was one of MRC’s founders and served as its chairman for 25 years.

“It is a wonderful honor to succeed a man like Earl,” said Miller. “He and the other founders of this hospital pledged to make it an exceptional facility and to be first in rehabilitative research, treatment and care. Thirty years later we renew that pledge and look forward to the challenges and opportunities that lie ahead.” Miller is a member of Galloway United Methodist Church in Jackson.

Board member William R. “Randy” James will replace Miller as the vice chairman. James has been a member of the board since 1992. “It is our duty and responsibility to serve our community,” he said. “I became involved with the hospital because I believe in its mission. This hospital has a great cause. We rebuild lives here.”

James received a B.S.B.A. degree in finance from the University of Arkansas. He is president of Pruet Production Co. and manager of Pruet Oil LLC. He serves on the boards of Millsaps College and the Andrew Jackson Council of the Boy Scouts of America. He is a member of Christ United Methodist Church in Jackson.

David McMillin has been named secretary of the board. McMillin, a board member since 1999, received his M.B.A. degree from Millsaps College and a B.B.A. degree from the University of Mississippi. He is an integrated sales manager for Xerox PeopleNet and is a member of the board of directors of the United Way of Jackson. McMillin is a member of Christ United Methodist Church in Jackson.

“Earl Wilson’s leadership and vision continues to inspire all of those who knew him,” said MRC president and CEO Mark Adams. “The hospital’s staff and our new board officers are as committed as ever to our mission of restoring and enhancing the lives of those we serve. We look forward to working together for the next 25 years.”