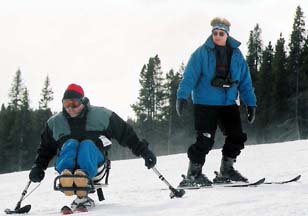 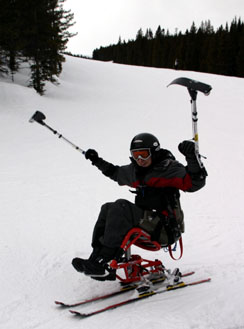 Napoli, of Crystal Springs, was one of six people with disabilities who traveled to Breckenridge, Colo., with Methodist Rehabilitation Center’s recreational therapy program. The Jackson hospital’s program helps the physically disabled learn about activities they can be involved in despite their injury.

Disabled skiers head down the slopes on either a double-bladed bi-ski or more advanced ones glide on a single ski called a mono-ski. They use two outrigger poles to maintain their balance, but instead of using legs to make turns, they are able to steer by leaning—or in some cases looking—in the direction they want to go.

“The biggest difference is that you’re sitting down,” said Napoli who injured the lumbar portion of her spine in 1999 when the ATV she was driving tipped over sideways.

“I was uncomfortable at first, but the instructor is with you all the time. You start with a tether tied to you and the instructor. But after my second run, they turned me loose and I just caught on,” she recalled.

For the next three days, Napoli had a blast skiing, she said. It was the first time in five years she had been on skis. She had spent 17 years of her life going to the slopes before her accident. “It was awesome. I was looking for places I could move to and live there,” she said.

Napoli and Benton resident Cindy Montgomery both used the mono-ski. “It’s a lot less forgiving than the bi-ski,” Napoli said.

“But once you get good at it, you can become totally independent on the slopes,” said Montgomery, who was injured in a car accident as a teenager. “With the monoski, you can even learn how to load up on the ski lift by yourself.”

The idea for a recreational therapy ski trip had been bounced around for years by MRC outpatients, said program director Ginny Boydston. “We had been toying with the idea for a while and finally just knuckled down and did it,” she said. She took her first group last year.

Showing people with disabilities what they’re capable of doing on their own is a big part of the goal of therapeutic recreation, Boydston said. “You hope that when they leave the mountain they can say to themselves, ‘Now I know how to do this and I can come back with my family and do it.’ That’s the ideal situation.” Boydston also arranges trips for people with disabilities to go scuba diving and water skiing.

But beyond teaching them a new skill, the trips also give them a chance to work together and share their experiences, Napoli said. “We spent every night around the fire just talking. We had great camaraderie.”

That was the highlight of the trip for Montgomery. “My favorite parts of the trip were when we were all together at night,” she said. “I don’t get to spend time like that with other people with disabilities too often. It’s great because you get to compare scars and discuss problems with someone who’s been there already.”

“It was also good for Brandon to be around other people in wheelchairs besides his mom,” Napoli added. “It made him more accustomed to us and helped him realize that there really isn’t anything different about us.”

For Napoli, learning to ski again was a dream come true. “I can’t say enough about Methodist Rehab offering a program like this for us,” she said. “This is something I’ve wanted to do but I didn’t know where to begin. It was great for us.”