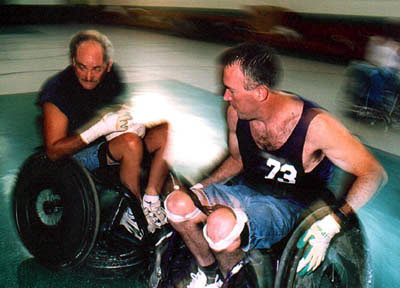 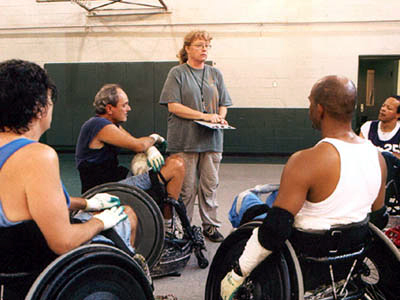 JACKSON, Miss.—Imagine football in bumper cars with the intensity cranked all the way up and you have an idea of how quadriplegics play rugby.

It’s two teams with four athletes apiece in specialized wheelchairs slamming into each other working to get a volleyball down a basketball court and across the goal line.

“It reminds me of playing football,” said Blackburn, 43 of Newton. “Being a part of a team and playing together and traveling together is a great experience.”

If you’ve never seen rugby played in wheelchairs by athletes who have had to fight for everything they have since becoming quadriplegic, it’s hard to imagine.

But quad rugby has been the fastest growing wheelchair sport in the world since its inception in 1979 in Canada. Back when they called it “murderball.”

Players are classified according to the level of their injury. The rules are designed to make the game fair by only allowing a mixture of players with greater and lesser ability on the floor at one time. A typical lineup might feature one player with good mobility, one player with poor mobility and two players of average function.

Contact between chairs is not only permitted, it's encouraged. “I love the competition,” said Brad Parker, 32, of Jackson. Prior to being injured in a diving accident, Parker enjoyed boxing and playing football. Now, even as a quad, he’s able to play a physically demanding sport that involves a lot of contact. “With Quad rugby, you can be aggressive and have fun and it’s all part of the game,” Parker added.

The sport does have rules, however. Players who break them often find themselves sitting in the penalty box for either a one-minute penalty or until the other team scores. Some infractions include touching another player’s body or wheelchair with the hands, deliberately spinning another athlete’s chair out of control or slamming into another chair before the whistle blows.

Today, there are about 50 teams in the U.S., with more than 20 others scattered around the world as far away as Australia. Seven quad athletes from around Mississippi convene in Jackson every Tuesday night for practice. They recently returned from the U.S. Quad Rugby Regional Tournament in Charlotte, N.C., where they finished fifth, missing a birth in the sectional tournament by one place.

Winning games is the purpose of playing, but it’s not the best thing about quad rugby, said Jags coach Ginny Boydston, director of therapeutic recreation at Methodist Rehab, Mississippi’s only freestanding rehabilitation hospital that treats patients with spinal cord and brain injuries, stroke and other neurological and orthopedic disorders.

“Rugby has given all the guys an increased level of independence and that really helps their self-confidence,” she said. “The majority of them weren’t jocks before their injury so they’ve had to learn how to work together as a team and I think that’s been really good for them.”

Boydston and team member Wiley Clark of Pascagoula started work on getting a rugby team in 1997. Grants were applied for and clinics were held to drum up interest. The result was a new activity that changes the lives of quadriplegics.

Working together not just with their teammates, but also with their opponents breeds camaraderie among folks who have a lot to share. Traveling to tournaments is the highlight of being a rugby player, the players say. “Where else am I going to go where there are 30 or 40 other quads,” asks Blackburn. “When we see other teams, we get to see how other people do things. We see and learn things that we’d never know about from just sitting at home.”