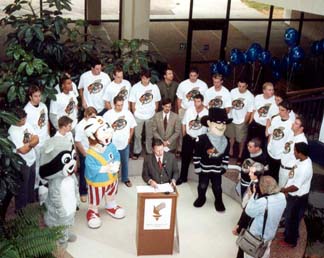 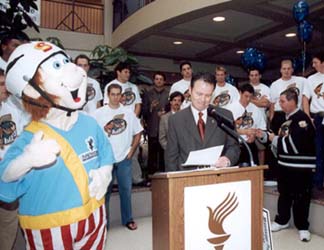 Sammy Safety looks on as Mark Adams, president and CEO of Methodist Rehabilitation Center welcomes the Jackson Bandits to the hospital.

JACKSON, Miss.—Teamwork, courage and determination was on display at Methodist Rehabilitation Center in Jackson as current and former patients from around the state joined with staff and visitors to welcome the Jackson Bandits home after their long road trip.

A large rally complete with cheerleaders, music, banners and signs was held in the hospital’s two-story Atrium Mall on March 15.

“Excitement was evident here as we welcomed the Bandits home,” said Mark Adams, MRC president and CEO. “Our patients share many of the same traits with these athletes. We think this rally was a wonderful opportunity for us to show our strong support for the team and for hockey in Mississippi, while also focusing on the courage and determination that our patients display every day.”

MRC is a 124 bed state-of-the-art hospital that treats spinal cord and brain injuries, stroke and other neurological and orthopedic disorders. It is the only freestanding physical rehabilitation center in the state and the only hospital in Mississippi to be named one of America’s best hospitals by U.S. News & World Report.

“The connection between sports and an active, healthy lifestyle is so important,” said Ginny Boydson, director of therapeutic recreation at MRC. “Our patients are thrilled that the Bandits came to MRC because they recognize that they both share the same strength and will to achieve, whether on the ice going for the win or in the hospital struggling to overcome a severe injury.”

Shortly before Thursday’s rally, several current and former patients rode with the team aboard a Steel Magnolia trolley as they made their way to MRC after a morning practice at the Mississippi Coliseum.

The welcome home rally was hosted by 98 Mix radio personality Nikki Brown and featured speeches from players and patients. A football player injured in a car accident in Pascagoula, a college student from Petal who suffered a brain injury in a diving accident and a former patient from Port Gibson who travels once a week to Jackson to play on MRC’s quad rugby team were among those attending the rally.

“The fact that many of our patients from other areas of the state came to the rally shows how excited they are about meeting the Bandits and being part of this event,” said Boydson. “It was a lot of fun for everyone.”

Cheerleaders from Jackson Academy, a Boy Scout troop, the quad rugby team and patients from Children’s Hospital also attended the event.
After the rally, former patients and staff gave the players a tour of the hospital. The team toured the spinal cord and brain injury floors, the motion analysis lab and the treadmill gait training area.