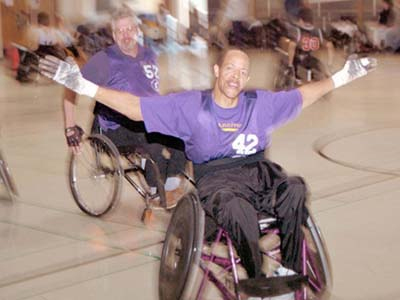 Frank Gambrell is a member of the Jackson Jags, a quad rugby team sponsored by Methodist Rehabilitation Center.

PORT GIBSON, Miss.—When Frank Gambrell found himself suddenly confined to a wheelchair and diagnosed with Lou Gehrig’s disease in 1986, doctors told him to put his personal affairs in order and be ready for the worst.

Today, however, the Port Gibson resident travels to Jackson each Tuesday to volunteer his time at Methodist Rehabilitation Center and to practice with the Jackson Jags, the Jackson hospital’s wheelchair rugby team. He has gone back to Alcorn State University and earned his degree in Biology with a 3.6 grade point average.

It’s been a long road back for the 47 year-old Gambrell. He had no warning when he was struck by his disability.

“I noticed one leg started getting weak and I started limping a little. A little later, I started having a problem with my hand,” Gambrell recalled of his illness in 1986. “It got bad enough, I could barely walk.”

Within six months, Gambrell went from being completely healthy and able to run, to riding in a wheelchair. When he came to MRC in 1994, doctors changed the diagnosis to Transverse Myelitis, an uncommon, acute spinal cord inflammation involving both sides of the spinal cord. Gambrell is considered quadriplegic.

“It’s a rather wicked disease,” said Dr. Michael Winkelmann, director of the Spinal Cord Injury Program at MRC. Winkelmann says he’s treated about 15-20 cases of Transverse Myelitis in the eight years he’s been with the hospital. It’s still not known what causes the disease. Some theories consider it to be viral or an autoimmune disorder.

Typically, patients begin working with a neurologist to treat the disease. It can produce various degrees of disability, Winkelmann said. “Some just experience some sensory loss, but others like Frank face more severe loss of function.”

Worse yet, the disease can attack anywhere, Winkelmann said. “It can even affect some areas of the brain.” Even today, it’s still not an easy disease to diagnose. “It’s still a little of a riddle to us. To some degree, it’s a diagnosis of exclusion,” Winkelmann added. Once other possibilities have been ruled out, Transverse Myelitis can be diagnosed.

Initially, Gambrell became depressed over his condition. “I never left the house for anything more than the mail,” he said. “I didn’t go anywhere for more than 10 years.”

Because damage done to the spinal cord by Transverse Myelitis is irreparable at this time, rehabilitation is important to help victims learn how to adjust to the loss of function.

At MRC Gambrell found the help and the motivation he was looking for, he said. “When I saw the patients there and I could see the determination of them trying to walk with a disability, I wanted to kick myself. That was when I started working hard at coming back.”

During his treatment, Ginny Boydston, director of therapeutic recreation at MRC, approached Gambrell about becoming involved in sports.

“Frank is an inspiration to everyone now,” said Boydston, who also coaches the quad rugby team. “He’s the stable rock of our team that everyone counts on because he’s such a team player. He always gives everything he has whether physical, emotional or social. Everyone likes Frank.” That’s as much because of his reliability, she added. Gambrell rarely ever misses a Tuesday practice.

“I give a lot of credit to Ginny for getting me into therapeutic recreation. That gave me an activity and a social life too,” Gambrell said. “I’m able to move around anywhere now. The rugby team is like a family.

“Rugby motivates you to go farther than you thought you could. It gives you a sense of victory when you see what you can accomplish,” he added.

Renewed and motivated, Gambrell went back to school and graduated from Alcorn State University in 1996. “It’s especially great when you’ve got people telling you that you’re doing too much, that you can’t succeed,” he said. “God encouraged me to move on with my life and I thank him for all of it.”

When Gambrell volunteers at MRC, he visits other patients and encourages them the same way he was encouraged when he first arrived. “He’ll give them advice on getting in and out of a wheelchair and moving around,” said Mark Bowden, therapy manager for spinal cord services at MRC. “It’s really helpful to the patients and to us to have Frank around. Most of us can’t really relate to what the patients are going through but Frank’s been there and it’s good for the patients to have someone like him to talk to.”

Gambrell’s motivation and faith are two main reasons for his successful reintegration into society, Winkelmann said. “He has great spirit for helping others. Whatever pinch he’s in, he always finds time to help other patients and give a consoling word.”

Volunteering is one of the highlights of his week, Gambrell said. “Rugby gave me back my confidence. You learn how to travel again. Working out gave me my life back and I tell patients that. You can’t let a disability make you give up. I’d love to see more people getting out of their houses.

“There’s a whole world out there.”