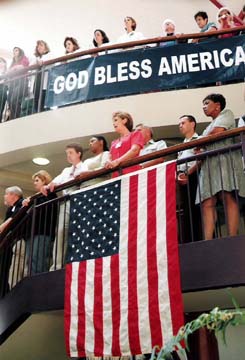 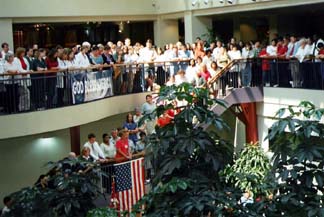 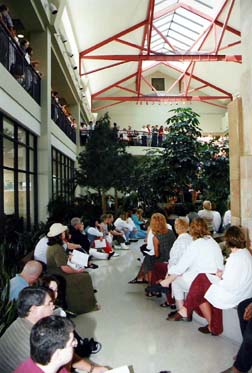 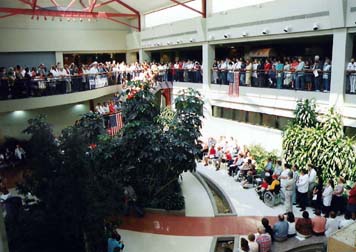 JACKSON, Miss.--Hundreds of health care workers crowded into Methodist Rehabilitation Center’s two-story Atrium Mall to show their sympathy and generosity for those killed in terrorist attacks in New York, Washington and Pittsburgh.

Methodist Rehab officials estimate more than 500 attended the hour-long memorial service where prayers were said and donations were taken for the American Red Cross disaster relief fund. The audience also learned how they could donate to memorial funds for the families of fire fighters killed at the World Trade Center.

During the service, Methodist Rehab Chaplain Bruns Myers, Jackson Fire Dept. Assistant Chief Turner Luttrell and the Rev. Joe May of the Mississippi Conference of the United Methodist Church each said a prayer for the victims and their families and led the crowd in singing God Bless America. Methodist Rehab President and CEO Mark Adams opened the service.

“This is one way we can come together and express our deep and profound grief for our fellow Americans, said Adams. “This hospital has always been about hope and recovery, but at this time we all feel we must share our sadness while doing everything we can to help.”

Myers said he was moved by the emotions of the crowd during the service. “You saw people out there tearing up and hugging each other. Sometimes it takes a tragedy for us to realize we’re not alone and unite us. It reminds us how important the people in our lives are and maybe, we just want to hug them and tell them we love them. I think at times of severe tragedy we’re reminded of our connection to each other as human beings. We all experience hurt and loss and death and we want to reach out and help others who are also hurting,” Myers said.

Luttrell asked the assembly to pray for the fire fighters in New York who are injured and for the families of those who lost their lives trying to save others. “As a Christian and as a chaplain, I can tell you that the greatest thing you can do is pray,” he said.

Luttrell read aloud The Fireman’s Prayer which ends: “And if according to my fate I am to lose my life, please bless with your protecting hand my children and my wife.”

Members of the crowd cried and waved American flags throughout the assembly.

“It was very helpful for me,” said Joan Damiens of Madison who attended the service with her son, Jamie. “It was so emotional and the prayers are always helpful.”

Damiens also said she appreciated that the event was held at noon.

“I’m glad it was in the middle of the day because our lives are so busy and so often we don’t take the time to consider what’s going on,” she said. “We need to take a break to do this, to remember those people before we move on.”

The hospital’s Atrium Mall houses a McDonald’s restaurant and a cafeteria. On a normal day, hundreds of staff and visitors from Methodist Rehab and from the nearby University of Mississippi Medical Center eat in or pass through the area, but the Mall was filled to capacity during the service.

“It is so moving to see so many people come out to show their support for the victims,” said Sandra Walker, Methodist Rehab’s director of volunteer services. “So many people pass through this area everyday, but now everyone seems a little closer and more like family. The feeling of concern and unity was overwhelming.”