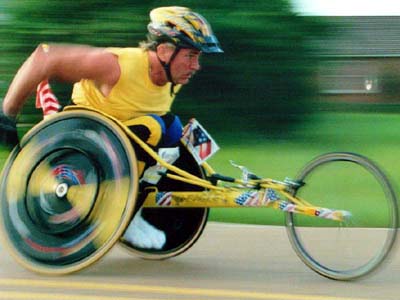 Randy Lavender of Tupelo carries the red, white and blue on his wheelchair during Methodist Rehabilitation Center's annual Reunion Race. 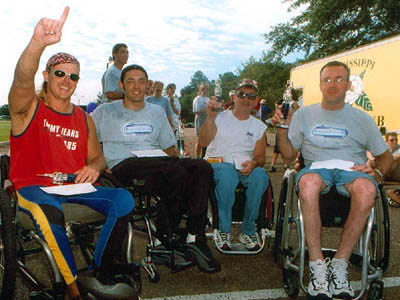 Reunion Race, now in its 16th year, has grown into an annual tradition that draws able-bodied and physically challenged athletes from across the South.

“Over the years we’ve seen this event get bigger and better,” said Mark Adams, president and CEO of Methodist Rehab. “A dedicated group of employees and volunteers work with the Mississippi Track Club to put on a race that appeals to runners and wheelchair racers of all ages and skill levels.”

The race’s move from Methodist Rehab’s main campus in Jackson to its east campus in Flowood and the appearance of the hospital’s injury prevention mascot, Sammy Safety, on roller blades, added to the excitement.

In a photo finish, Corinth’s Doug Price won the open wheelchair division, covering the 3.1 mile course in 14:23. By the smallest of fractions, Price barely edged his wheel ahead of the men’s quadriplegic winner, Wiley Clark of Moss Point, who also posted a time of 14:23.

Price said he wasn’t at all surprised to see Clark, a three-time paralympian, wheel-to-wheel with him at the finish. “I was thinking he was behind me, but I knew he was close. Wiley is always a tough competitor. The course was excellent and we had perfect weather for racing. It was exciting.”

Nancy Spillner, of Atlanta, won the women’s wheelchair race with a time of 21:10.

Other Reunion Race winners included Derek Ray and Teresa Crothers, both of Brandon, who won the men and women’s 5K runs while Mike Renfroe and Debbie Cheney won the 5K walk.

Frances Judkin’s 12 year-old son, Jud, completed his first 5K race. “It was an awesome experience,” she said. “The entire crowd—possibly because I was screaming so much—made my son feel so special when he finished. The volunteers were very enthusiastic and seemed to sincerely enjoy being there.”

Proceeds from Reunion Race benefit the Center for Neuroscience and Neurological Recovery at Methodist Rehab and the hospital’s patient care fund. CNNR researchers work to improve recovery from brain and spinal cord injuries, stroke and other neurological and orthopedic disorders.

“I think everyone who participates in the race understands that it isn’t a typical race,” said Ginny Boydston, director of therapeutic recreation at Methodist Rehab. “The runners and wheelchair racers really root for each other and cheer one another on. You haven’t seen courage, strength and determination until you’ve seen this race.“

New this year was the Reunion Race Rock and Roll where children of all ages covered a one-mile distance on their choice of wheels—scooters, gurneys, wheelchairs—anything that could roll. There was only one catch: They had to do so using the appropriate safety gear including helmets and kneepads.

Joining them on the course was Methodist Rehab’s newest employee, Sammy Safety, a certified safety superhero, who was on hand to entertain onlookers and participants as he helped show kids the importance of wearing bicycle helmets and seat belts. Sammy is part of Think First, Methodist Rehab’s statewide injury prevention program that encourages children to always think first about safety and injury prevention.

For those who weren’t racing or rolling there was still plenty to see and do.

Methodist Rehab’s 69,000-gallon hot air balloon, The Independence, was on display and children and adults had the chance to compete in a wheelchair obstacle course that gave able-bodied people the opportunity to encounter the day-to-day obstacles that those in wheelchairs have to overcome everyday.

“I have already told people that this is a race to mark on their calendar for next year,” said Judkin. “My hat is off to all volunteers and race coordinators. The hours put into this event certainly made it a special day for my son and myself as well as many people I visited with.”