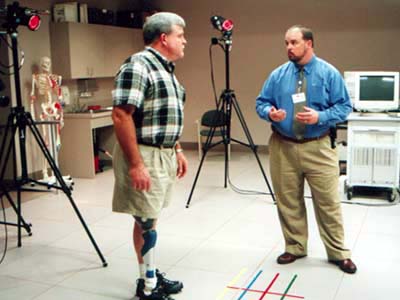 FLOWOOD, Miss.—Bruce Spann was helping friends cleanup after a February storm violently tore through Columbus, Miss., when a retainer wall came crashing down on him, severely injuring his right leg.

Emergency physicians told the Bastrop, La., resident that surgery to fuse his ankle would leave him with limited mobility and unable to do physically challenging things like running or climbing without assistance.

“It was that or have an amputation and be fitted for a prosthetic leg that I’d be able to run, jump and climb with,” Spann recalled. “I didn’t feel like I had much of a choice.”

Doctors amputated Spann’s right leg above the knee. When he showed up at Methodist Rehabilitation Center’s orthotics and prosthetics clinic in Monroe, La., the 49-year-old registered nurse was ready to get back to work.

“He was a very informed patient,” said clinic coordinator Chris Wallace. “He had been to all the Web sites and read all the information he could get his hands on. We looked at his lifestyle before the accident and his goals and desires and tried to mesh those things together and come up with the best option for him.”

Spann and Methodist Rehab’s team of prosthetic specialists agreed that the C-Leg (short for computer-leg) would work best for him.

The Otto Bock C-Leg is a microprocessor-controlled hydraulic knee that functions as a regular knee would. Sensors on the knee adapt to the wearer’s movements. And prosthetic practitioners can fine-tune the leg by plugging it into a computer.

Methodist Rehab was one of the first sites in the U.S. to fit amputees with the C-Leg. Along with Wallace, a board-certified prosthetist and orthotist, the Jackson hospital boasts a team of C-leg specialists who work with amputees at clinics in Monroe, Hattiesburg, Flowood and satellite offices throughout Mississippi.

Rick Psonack, director of the hospital’s orthotics and prosthetics Division on its East Campus in Flowood, has fitted more C-legs than anyone in the country and prosthetist Brad Kennedy not only wears a C-Leg himself, but also teaches C-Leg training courses around the country.

“A C-Leg is a very high-tech piece of equipment,” said Psonack. “It analyzes knee angles and movement 50 times every second. The knee functions excellently at different speeds and it makes going down stairs and walking on uneven surfaces a lot easier.”

Spann was taken to Methodist Rehab’s state-of-the-art Flowood laboratory off of Lakeland Drive where prosthetic practitioners designed a custom socket that fits comfortably around Spann’s residual limb. The C-Leg system was then put together and programmed to match Spann’s normal walking pattern.

Typically, people with above-knee amputations face a long road to walking naturally, said Steve Lindsley, a prosthetic resident in the Monroe clinic who assisted in the process.

“It’s usually a lot harder for them because of the balance they’ve lost,” Lindsley said. “But Bruce was getting around within hours of being fit with his new leg.”

Already, the prosthetic practitioners are working on smoothing out Spann’s walking so that he won’t have a noticeable limp. “That’s something that most people can’t accomplish until they’ve walked on the prosthesis for over a year,” Wallace said. “It’s been a testament to his desire and hard work.”

Spann has had to take on a rigorous exercise regimen to make his walking better. “Getting my body back in shape has been the hardest part. I’ve found muscles I didn’t even know I had,” he said. “But I’m dedicated to this. I just got a home gym and I use it all the time.”

Spann continues to make frequent visits to the orthotics and prosthetics division’s Monroe clinic for fine-tunings and adjustments to his socket. “Our challenge has been to maintain a good fit for him,” Wallace said. “He’s becoming a better walker but his residual limb is still changing shape as the swelling decreases. So we have to constantly monitor the fit of his socket and make appropriate adjustments to ensure the most comfort possible.” That’s why qualified prosthetic professionals are important, he added. “If the fit isn’t good, none of the high-tech components will be a benefit to him.”

The artificial leg has allowed Spann to do things he wouldn’t have been able to with a fused ankle, he said. “I’ve been going hunting again and I can climb into my deer stand without help. Those are the kinds of things I didn’t want to miss out on.”

Spann has returned to work and says no one seems to mind his metallic leg. “Everyone’s been very supportive and understanding of me,” he said. “People have told me they’re proud that I’m coming back and working.”

Since returning to the job, Spann has taken advantage of the opportunity to talk to other amputees whenever possible.

“I tell them there is light at the end of the tunnel,” he said. “I’ve been there. I know you can get down over it, but you can’t stay there.