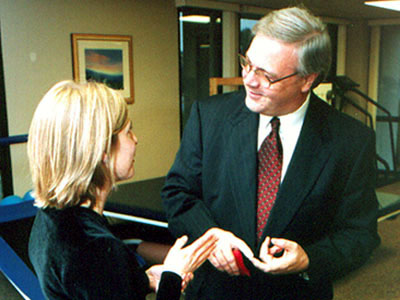 JACKSON, Miss.—Now in a new home, the staff at Methodist Rehabilitation Center’s Quest program hopes to help even more brain-injured patients find their way back to their schools, jobs and lives.

The community-based treatment program, the only one of its kind in Mississippi, is now in a larger building designed for the specific needs of its patients.

“It’s a great facility,” said program coordinator Joyce Leverenz. “We’re not so spread out anymore and now we can communicate better since the entire staff is together in one place.”

Quest staff, friends and former patients gathered to hold a ribbon cutting ceremony for the program’s new home in Jackson. Patients like Marshall Magee, of Madison, took the opportunity to visit old friends and congratulate the staff. Magee, the president and general manager of Proteus Communications (Arrow 94.7 and WVIV 93.9), suffered a stroke in April 2000. He graduated from Quest and is back behind his desk and on the air.

Since it’s inception in 1996, Quest has helped more than 125 brain-injured patients return to their communities and reclaim their lives. Dr. Mark Sherer, director of neuropsychology at Methodist Rehab and the principal investigator of two studies on traumatic brain injury, started the program and serves as its clinical director.

“I had directed a similar program in Texas and when I came here, I recognized that Mississippi didn’t have a program like this for brain-injured patients and I felt that it was needed,” said Dr. Sherer.

That need was proven by patients like Jamie Rider who knew she wanted to be in health care. But it took an aneurysm and her recovery before she found the career she really loves.

Today, she cares for elementary students as a school nurse in the Jackson Public School district. She’s able to do her new job as few brain injury victims are – by herself.

Aneurysms are caused by a weakness in the wall of a cerebral artery and can affect the brain in much the same way as a stroke, said Dr. Rahul Vohra, Methodist Rehab’s medical director. “It acts the same way by decreasing blood flow to the brain and it’s commonly fatal.”

After working with Methodist Rehab therapists, Rider regained the mobility and function that had been lost from the aneurysm, but as she prepared to leave the main hospital, there was still a problem. She had a head injury and still faced enough mental obstacles to make getting and keeping a job a seemingly overwhelming challenge. That’s where Quest came in.

“Our therapists work with patients like Jamie to help them improve in a more personalized structure,” said Leverenz, who was Rider’s primary therapist and her vocational counselor, charged with overseeing Rider’s treatment program and helping her land a job.

“Jamie had some trouble with her short-term memory and she had a hard time getting started on tasks,” Leverenz said. “We had to help teach her how to structure her day. As she got better, we started working on her job skills and the practical part of getting a job.”

Quest is different from other rehabilitation programs for people with brain injuries in that its primary focus is returning people to a point where they are making contributions in their communities again, Dr. Sherer said.

Patients in Quest set goals such as getting back to school, work or a level of independence. One way to do that is to have public group outings, Leverenz said.

Rider was encouraged to practice filling out applications and writing resumes as a part of her main goal – to get a job in nursing. “We had her work for the Jackson Bandits and she also worked here at Methodist Rehab,” Leverenz said. “But for her third trial, her family actually found her a job doing some nursing activities in a school health clinic.”

That’s where Rider found her calling.

“I loved it,” she said. “I had wanted to work in pediatrics when I was in school so it just came full circle for me to end up as a school nurse.”

Rider’s sister, a nursing instructor at the University of Mississippi Medical Center, helped find the position and when the full time nurse left for a pregnancy, Rider was in.

Rider said it was also helpful to be able to learn with other patients who had similar injuries. “Lot’s of folks can have sympathy for you, but not many can truly have empathy,” she said. “It’s helpful to have the advice and comfort of others who have been in the same boat.

“Everything here makes a difference.”