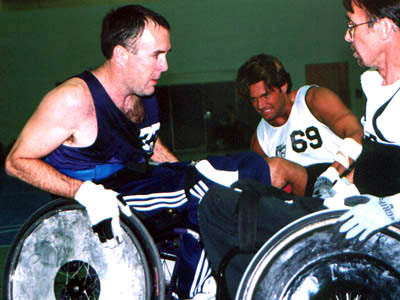 The Jackson Jags, consisting of athletes from all over Mississippi and Louisiana, are sponsored by Methodist Rehabilitation Center in Jackson.

For the first time, a Jags member was awarded all-tournament honors. Wiley Clark of Moss Point earned the distinction in his fifth appearance in the regional tournament.

“Wiley had a great tournament. He was focused and he played with a lot of guts,” said Jags coach Ginny Boydston. “Wiley has always been a leader for us on the court. Whenever he’s out there, the other guys play even harder.”

Clark wouldn’t take credit for the accomplishment. “It’s a team thing,” he said. “It’s a great honor and I’m proud of it, but I couldn’t have won this without the rest of the guys out there playing as hard as they were.”

Now in their fifth year, the Jags have earned a name for themselves in rugby, but it hasn’t come easy.

Quad rugby has been around since the 1970s when Canadian quadriplegics were seeking a sport that they could call their own. The game is played on a basketball court with goal lines marked on the ends. Teams of four use strategy and skill to try and maneuver their wheelchairs past their opponents and carry the rugby across the goal line.

“The hits are brutal,” said Jags Captain Mike Blackburn of Newton. “It’s a really demanding sport with all the contact going on and trying to keep up with who’s got the ball, but it’s a whole lot of fun. I wouldn’t be working out near as much as I am if it weren’t for rugby and tennis.”

Boydston and Clark got the ball rolling on getting a rugby team in 1997. Grants were applied for and clinics were held to drum up interest. The result was a new activity that changes the lives of quadriplegics.

“I was introduced to the national team and we played a pick-up game together,” said Clark, who broke his toe in that first quad rugby experience and had been hooked ever since. “Even with my crushed toe, I couldn’t believe how much fun it was.”

Winning games and competing against other teams is important, but it’s not what makes quad rugby special, said Boydston, who is also the director of therapeutic recreation at Methodist Rehab.

“Rugby is about winning your own battles as much as it is about winning out on the court,” she said. “After their injury, a lot of quads have a hard time adjusting and some even feel like their lives are over. But they’re not.

“All of our guys on the team have their own story and all of them have had to overcome a lot to get to this point. Rugby helps. It gives them discipline, teaches them to be independent and makes them more self-confident. Most of the guys didn’t play sports before their injury so here they are in the middle of their lives learning how to work together. It’s great for them,” she added.