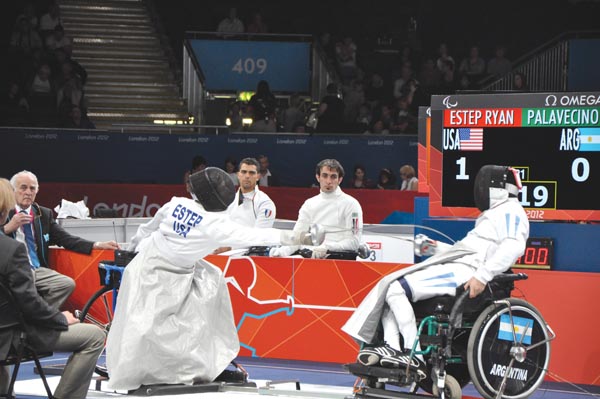 Methodist Rehab and Team USA wheelchair fencer Ryan Estep, at left, competed in the epee category B pool round at the 2012 Paralympics. 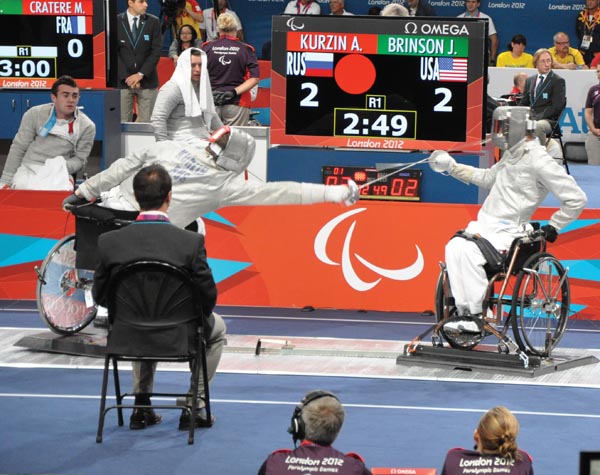 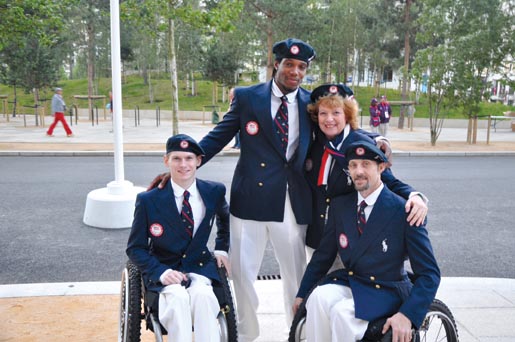 London was the first taste of the sheer magnitude of the Paralympics for Methodist Rehab wheelchair fencers Ryan Estep and Joey Brinson.
And now they’re both counting the days until the 2016 games in Rio de Janeiro, Brazil.

“It was a blast just to be there,” Brinson said.  “It made me feel like all the work I had put in was worth it, just to make it there and be able to compete. And it really made me want to get ready for the next one. I’m ready now. I wish we could go do it right now.”

“Everything about London, from start to finish, was just completely amazing,” Estep said. “I’ve never experienced anything like that, and I doubt I will again unless I go to Rio.”

Expectations had been high for the athletes going into the competition, especially for Estep, who was ranked No. 5 in the world in epee style fencing.

Unfortunately, neither competitior came home with a medal as both Estep and Brinson were eliminated in the preliminary pool rounds.

“Sure, we were disappointed in the results,” said Methodist Rehab therapeutic recreation director Ginny Boydston, who serves as team leader for the U.S. wheelchair fencing team. “But we were not disappointed in the fencers, because they made the team. They were representing the United State at the Paralympic Games. I’m very proud of our guys.”

“Just getting to go there in and of itself was an accomplishment,” Estep said. “I went from not even knowing what fencing was three years ago to being one of the highest ranked fencers in the world.”

Making the 2012 team had been a phenomenal feat for both fencers.

At the Paralympics, there’s an intense level of pressure for the athletes to perform their absolute best on a single day of competition, after years of training and preparation.

“The pressure that we had there was so much more than any other World Cup or any other competition that we’ve done,” Brinson said.

“Nothing I had done up to that point could have prepared me for London—for the first time in my fencing career we had a big audience,” Estep said. “I’m not making any excuses, but it was something that I wasn’t used to.”

Both fencers agree that the bottom line is they had an off day.

“For some unknown reason I was really passive—I was a lot more defensive and less aggressive than I normally am,” Estep said. “I picked the worst day I could have to have a bad day.”

“I wouldn’t say that I totally fenced bad. It just wasn’t good enough on that day,” Brinson said. “We put in the training, we knew what we had to do, but we just didn’t execute the plan completely the right way.”

Estep sees London as a learning experience that will make him a tougher competitor.

“I feel that I will be much better prepared for Rio having this experience under my belt,” Estep said.

Brinson agrees.“We know the real pressure of it now,” he said. “I think it’s prepared us to be more relaxed, to perform, to do what we’ve trained to do.”

The future looks bright for both fencers. They have advanced so much as competitors in such a short time that all signs point to them being at the top of their respective games come 2016.

“I think more experience and more mental toughness are the two things they both need,” Boydston said. “Now, we’ve got four years ahead of us to get that.”