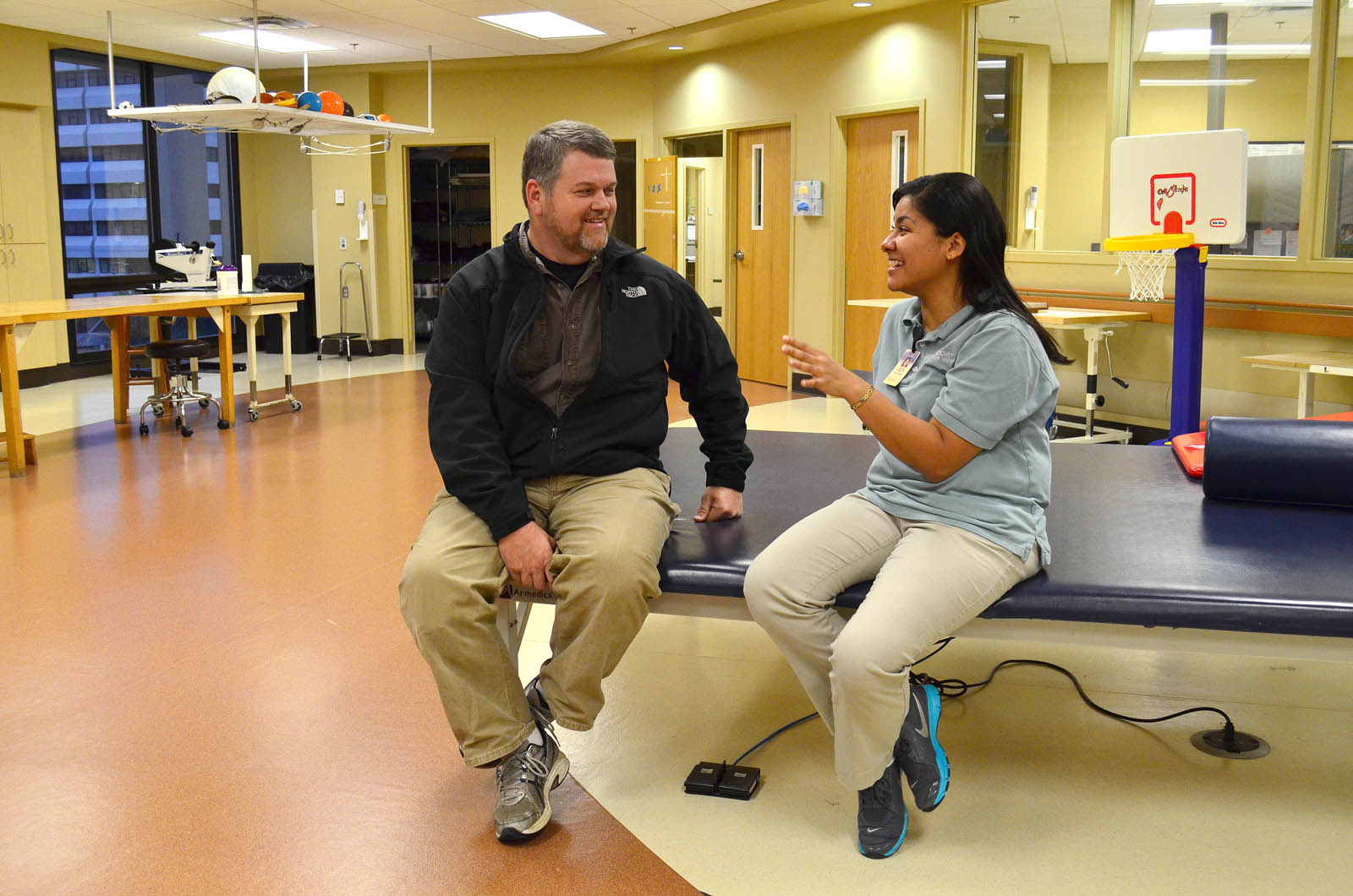 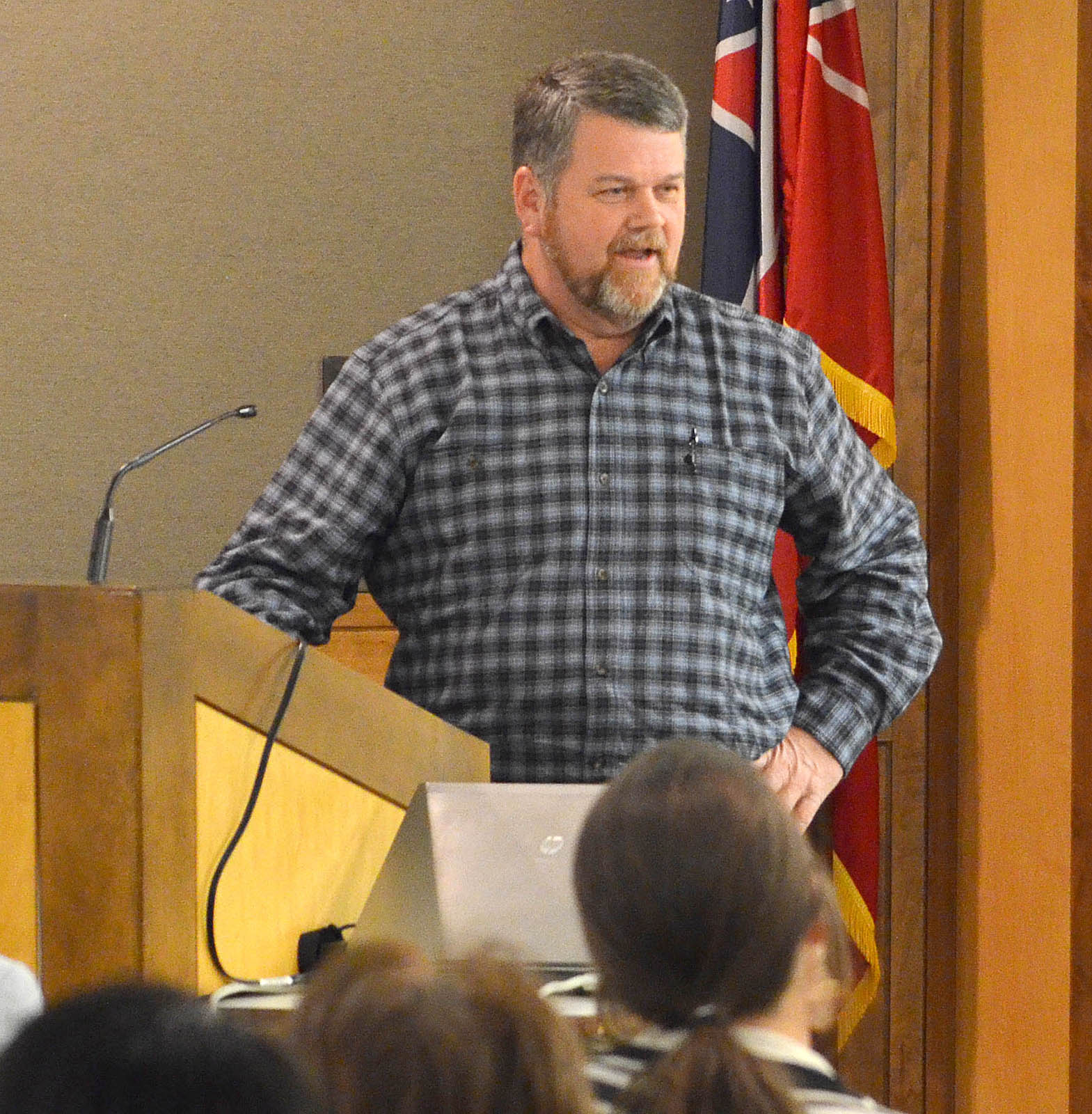 Jeff Newman's recovery was so remarkable, Methodist Rehab asked him to share his success story at a recent stroke conference.

As he sat slumped on his living room floor, unable to walk or speak clearly, Jeff Newman knew it was time for a turnaround. A stroke had paralyzed his right side, and the father of three realized his unhealthy habits were to blame.

“I had been over 300 pounds for probably 10 years, and I had tried to lose weight before,” said the 49-year-old owner of Newman’s Pawn Shop in Hazlehurst. “But I wasn’t dedicated. I finally said: ‘I’ll just die happy.’

“But when my stroke happened, I said: ‘Lord, if you’ll give me a chance, I’ll do what I’m supposed to do.’”

Eighteen months later, Newman’s recovery is nothing short of remarkable. He was even the patient success story for a recent stroke conference at Methodist Rehabilitation Center.

“Mr. Newman is proof of what a motivated patient can accomplish with the right resources,” said Dr. Alyson Jones, who leads the Jackson hospital’s stroke recovery team. “He’s also a good reminder of why comprehensive rehab services are so important for the nearly 5,000 Mississippians who suffer a first stroke each year.”

“Unless you go through something like this, you don’t realize what Methodist Rehab does,” Newman said. “I’ve got about 75 percent of the strength back in my right side, and I attribute that to therapy.”

Today, Newman feels fortunate to be back at work and enjoying favorite activities such as deer and turkey hunting. “I’m lucky, it could have been much worse,” he said. “I overlooked signs that are so plain. All my therapists said that’s a guy thing. We think we’re invincible.”

The day a clot began blocking blood flow to his brain, Newman became dizzy and broke out in a cold sweat. When a friend checked his blood pressure, it was 225 over 125—far from the recommended 120 over 80. Yet Newman didn’t head to the hospital.

Instead, he started popping blood pressure pills and hoping for the best. Twelve hours later, he was on the floor thinking: This is it. “Looking back, it was dumb to wait,” he said. Particularly since the delay kept doctors from administering tissue plasminogen activator (tPA).

“tPA is a clot-busting drug that can reduce the disabling effects of ischemic stroke, but it must be given within three to four hours of stroke onset,” Dr. Jones said. “That’s why we encourage people to be familiar with stroke symptoms and seek medical help quickly.”

Newman arrived at rehab ready to work hard and get healthy, and Methodist Rehab physical therapist Veronica Taylor welcomed his cooperative spirit. Not all her male patients are so compliant. “Sometimes it’s hard to get them to buy into everything we’re saying, but he was never one to complain,” she said. “He always had a good attitude.”

Taylor focused much of Newman’s therapy on helping him walk again, and he graduated from a walker to a four-pronged cane before he left inpatient rehab. He continued his therapy at Methodist Outpatient Neurological Rehabilitation in Flowood, where he “threw that cane down” in just a few weeks.

“The therapists helped me progress to walking without a cane, and I was also able to significantly increase the use of my right arm,” he said.

He still struggled with foot drop, however, and was eventually fitted with a Walk-Aide at Methodist Orthotics & Prosthetics in Flowood. The wearable device uses electrical stimulation to lift his right forefoot and even works with his hunting boots.

Newman said he’s grateful that the Mississippi Department of Vocational Rehabilitation funded the Walk-Aide, as well as a stint in Methodist Rehab’s Quest program in Jackson. The outpatient day program prepares stroke, brain and spinal injury patients for a successful return to work, school or community life, and Newman said it’s just what he needed to get back on the job.

“I was blessed to have therapists who really cared about me,” he said. “Physical therapist Rachel Dear worked my tail off. She’s not happy unless you’re sweating.”
“Any time anything got easy for him, I kicked it up a level,” Dear said. “I’d say if you’re already carrying 20 pounds in a box, we’re going to do 30 and have you carry it upstairs.”
Quest occupational therapist Charlene Toney challenged Newman with activities to improve the strength, fine motor skills, range of motion and coordination in his right arm and hand. Because Newman is an avid hunter, Toney and his other therapists made sure he could pull back his bow. Toney also traveled to Hazlehurst to evaluate his work site and devise an exercise program that he could perform at his local gym.
In group and one-on-one sessions, Newman worked with Quest clinical psychologist Danny Burgess to address adjustment issues that often follow a serious injury or illness. Before his stroke, Newman didn’t know he had diabetes. And like many stroke patients, he needed advice on how to adopt a healthier lifestyle.
“A lot of stroke patients are overweight with blood pressure and diabetes issues and many really have a poor general knowledge of nutrition,” Burgess said. “So we talked about how to make good decisions with diet and exercise.”
At home in Hazlehurst, Newman had plenty of people cheering him on, including his family, friends and fellow members of Utica Baptist Church. “If I lost just a little bit of weight, they encouraged me,” he said. “I still get that today, and people don’t realize what that means.”

Bolstered by his mom’s healthy cooking, Newman shaved off 120 pounds. He said his secret was regular exercise and ridding his diet of sweet tea, nightly bowls of ice cream and his own personal “kryptonite”— peanut butter and jelly sandwiches. “When I went to see Dr. Jones for my checkup, I had lost about 80 pounds. And she said: ‘You need to keep that up.’ ”

Dr. Jones said she wishes more of her Methodist Rehab patients would follow Newman’s example. “He understood why his stroke happened, and he was determined to correct everything. Too many hard-headed people want to eat what they want and keep smoking. I see a lot of people back with repeat strokes.”

But Newman doesn’t plan to be one of them. “I try to do everything my therapists told me because I wasn’t doing what anybody told me before,” he said.