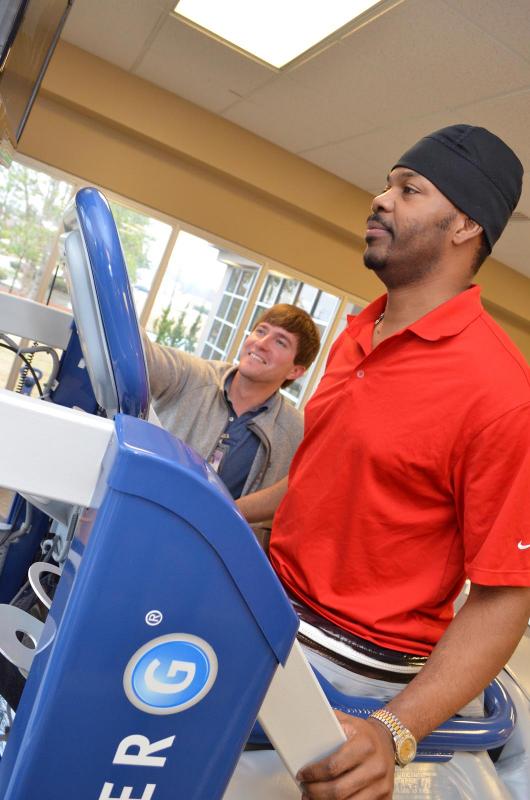 Wes Myers, a physical therapy assistant at Methodist Rehabilitation Center Outpatient Services in Flowood, adjusts the AlterG Anti-Gravity treadmill to give Curtis Brown a low-impact workout. Myers said the treadmill can unload up to 80 percent of a person’s body weight and has been a great therapy aid as Brown continues to recover from a workplace fall that left him unable to stand and in a wheelchair for months. 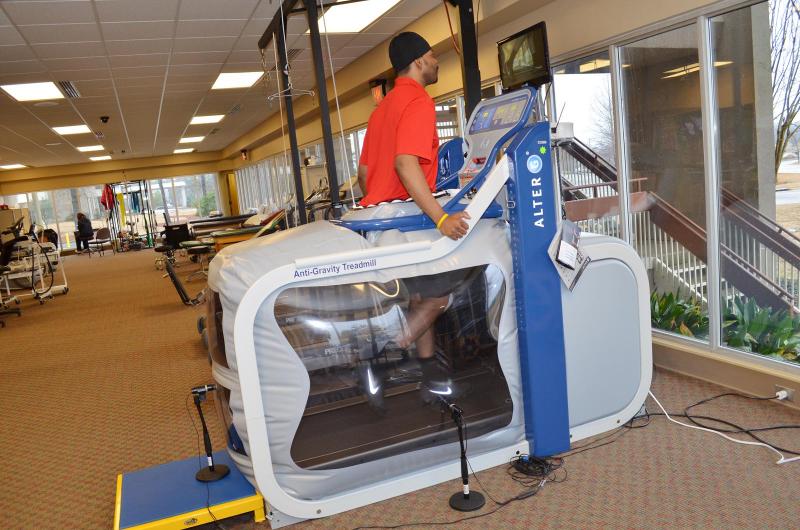 “It’s like walking on the moon,” says Curtis Brown of Jackson, as he exercises on the AlterG Anti-Gravity Treadmill at Methodist Rehabilitation Center Outpatient Services. The Flowood clinic is the only one in Mississippi to offer the NASA-patented technology to therapy patients like Brown and as a training aid to the general public.

The same rocket-science technology that helps elite athletes get off the disabled list is putting people back on their feet at Methodist Rehabilitation Center Outpatient Services.

The Flowood clinic is the only facility in Mississippi to offer AlterG Anti-Gravity Treadmill training to the general public. The NASA-inspired system off-loads as much as 80 percent of a person’s weight and is now an FDA-approved device for functional rehab and a training aid for everyday athletes.

“It allows people to exercise before they have the strength or endurance to support their own weight,” said Joe Jacobson, director of outpatient services at Methodist Rehab. “They can exercise at an aerobic level, and it’s not painful.”

Realizing the treadmill’s potential for getting players off the sidelines, the Nike Oregon project signed on to be a prototype tester for the device in 2005. Today, AlterG counts the Washington Wizards, Green Bay Packers, Texas Rangers and U.S. Olympic Training Center among its customers.

“It took off in sports because athletes who got injured could begin rehab a lot sooner,” said Jason Parnell, a regional account manager for AlterG. “Soon after, we began to incorporate our Anti-Gravity Treadmill into the physical therapy setting.”

During an AlterG session, the lower body is encased in a waist-high plastic chamber filled with load-lifting, pressurized air. Treadmill controls adjust the pressure, creating a low-impact, workout zone for anyone with weight-bearing issues.

Users compare the sensation to walking or running on the moon, and interested individuals can try it for themselves. To introduce the public to all of the AtlerG’s features and applications, Methodist Rehab will host free demos by appointment March 17-22. Call 601-936-8888 to schedule a time.

Jacobson said the system can help therapy patients recovering from leg or joint surgery, and it’s a good tool for anyone too weak or unsteady to walk unsupported. The clinic also offers the treadmill as a training resource for local athletes at a rate of $15 per 30-minute session.

“It’s a way for injured runners to keep their base and continue to run without the pounding that goes with it,” Jacobson said. “If you want a progressive return to weight bearing, the treadmill is the way to do it.”

Take it from Curtis Brown of Jackson, who wishes the AlterG had been around when he first began rehab. He wasn’t even able to stand after a workplace fall ruptured the tendons that connect the quadriceps to the knees.

“I was in a wheelchair for three and a half months,” he said. “I couldn’t walk without leg braces.”

Now up on his feet, Brown appreciates the AlterG’s impact on his recovery.

“It feels like you’re an astronaut walking on the moon,” he said. “It lifts you, takes the weight off your body and takes the pressure off my knees for sure. So I was able to walk and jog and do things I couldn’t normally do.

“I can bend my knee better since I started using it. And it has really helped with swelling. I would recommend it to anybody who has my injury for sure and for knee replacement, patella problems, ACL and MCL injuries—that’s the machine.”

Methodist Rehab physical therapist Sara Gibson tried out the system, and the triathlete and distance runner says she’s excited about the possibilities for patients and athletes alike.

“I thought it was a great tool,” she said. “As a runner, there are times when you’re coming back from running-related injuries, such as shin splints or stress fractures. Anytime you can start running without as much pounding is good.

“I had a badly sprained ankle once, and I would have loved to start my rehab on the AlterG. Being able to unweight my legs would have gotten me back to running faster with less pain.”