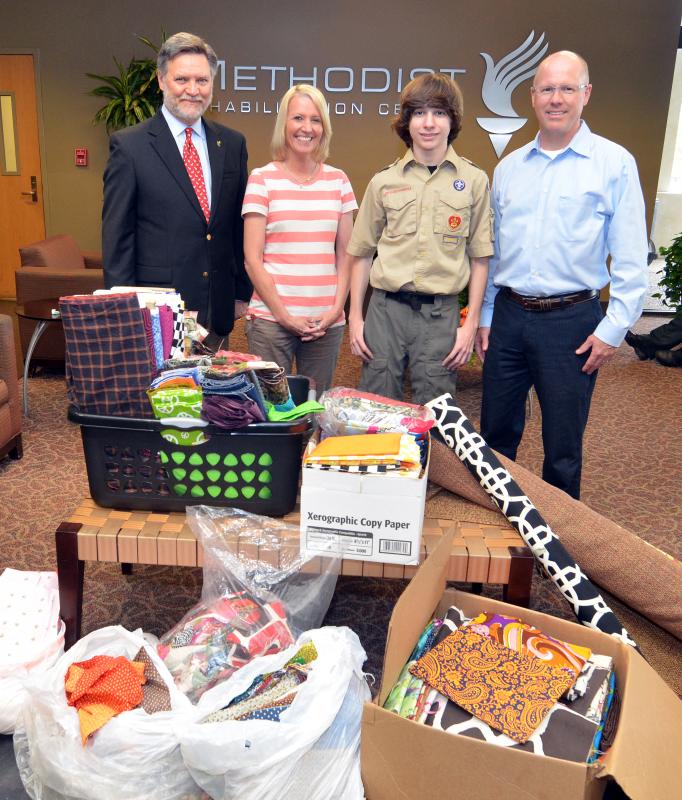 Blake Ganzerla, third from left, has great respect for Methodist Rehabilitation Center, the Jackson hospital that helped his brother recover from a brain injury. So when he learned the center’s volunteers needed materials to make wheelchair bags for patients, the Madison teen launched a fabric drive. Surveying the successful results of his Eagle Scout project are, from left, Steve Hope, vice president of human resources at MRC, Blake’s mother, Alice, and Chris Blount, director of the hospital’s Wilson Research Foundation. 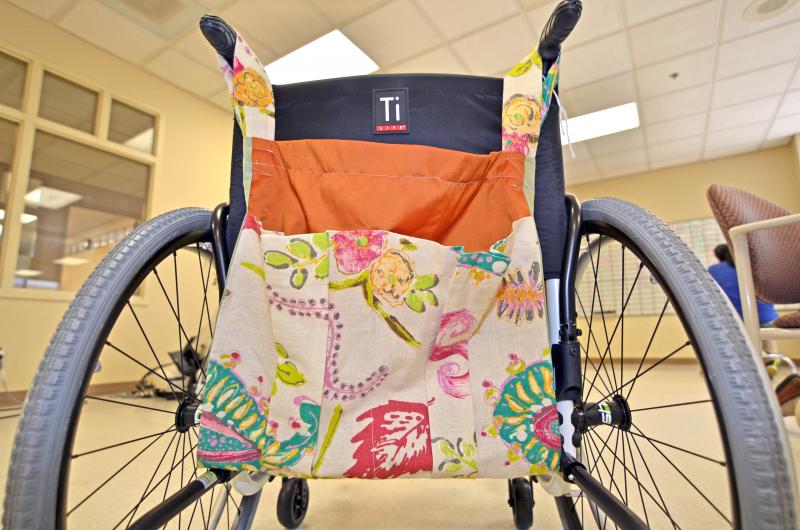 Patients at Methodist Rehabilitation Center in Jackson love the hand-sewn bags that allow them to carry their personal items while they’re pushing their wheelchairs. 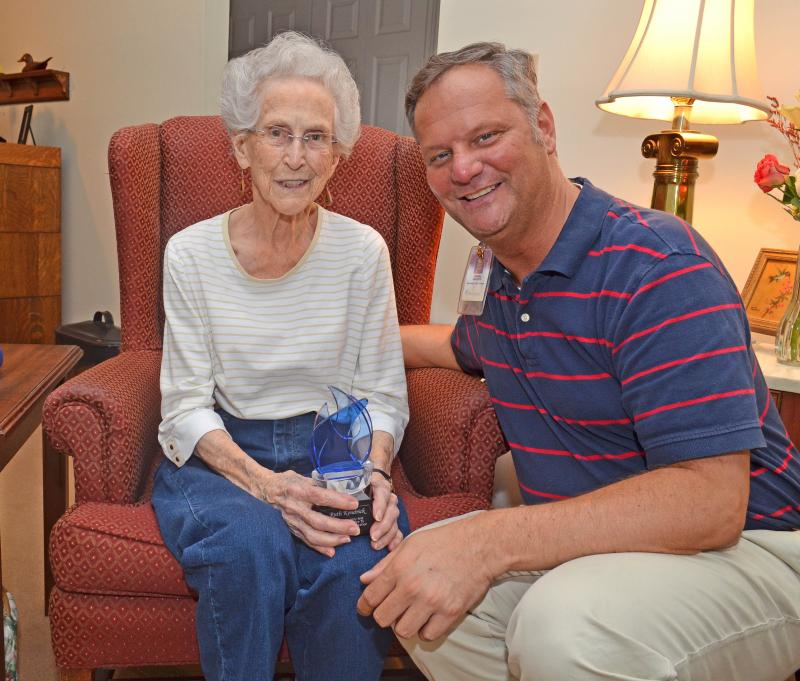 Robby Scucchi, right, volunteer director at Methodist Rehabilitation in Jackson, presents Ruth Kendrick of Ridgeland with an award for her many years of service making wheelchair bags for MRC patients. Kendrick, who recently retired from the volunteer job, is happy to hear her efforts will be continued by a new group of seamstresses who were inspired by Blake Ganzerla’s Eagle Scout project.

As he visited his brother, Chris Green, at Methodist Rehabilitation Center, Blake Ganzerla never noticed the colorful fabric bags hanging on the backs of patients’ wheelchairs.

The 10-year-old was too focused on helping Chris overcome a traumatic brain injury.

But six years later, the Madison teen is all about keeping the bags in production. As his Eagle Scout project, he launched a drive to supply donated fabric to the volunteers who make the coveted carryalls.

“We were almost out of fabric, so Blake’s project addressed a very critical need,” said Chris Blount, director of MRC’s Wilson Research Foundation. “His leadership has resulted in enough fabric collected for at least a year’s supply—perhaps even several years!”

As they delivered the fabric to MRC, Blake, 15, and his mother, Alice, said they were happy to help the Jackson hospital minister to people recovering from disabling injuries and illness.

“Our whole family wanted to repay Methodist Rehab,” Alice said. “Chris graduated with honors from Brandon High School and is now a senior at Mississippi State University. And I don’t know where he would be if not for MRC. We have a true heartfelt love for this place and the people who work here.”

Blake said he got the idea for the fabric drive when Blount, a fellow member of Madison United Methodist Church, told him how much wheelchair users rely on the bags.

“When you’re pushing a wheelchair, it’s hard to hold anything in your lap,” Blount explained. “So years ago, some of our volunteers came up with the idea to hand-sew custom bags that would fit on the back handles of each wheelchair. Our patients absolutely love them.”

“They make a huge difference in our efficiency and in our patient’s comfort,” she said. “These bags mean that patients come prepared to the therapy gym. They can carry cell phones, books, glasses, therapy tools, water bottles, etc. And these bags also go home with our patients, so that they will have easy access to necessities when they are out in the community.”

To solicit fabrics, Blake put donation boxes at several churches and promoted the project via flyers and on Facebook. “It came slow at first, then we got a lot,” he said. His official estimate of the amount is “too much to count.”

‘People were just so generous,” said his mother.

The drive also inspired 16 seamstresses from the Jackson Quilters Guild and Christ United Methodist Church to help make the bags. And their involvement couldn’t have come at a better time.

MRC volunteer Ruth Kendrick of Ridgeland recently retired from the duty, after whipping out about 500 bags per year for 16 years.

“Mrs. Kendrick has always said that it’s a blessing that she found a way to help so many people,” said Robby Scucchi, volunteer director at MRC. “But I know she appreciates that others have joined the effort.”

“Anybody could have done what I did—you’ve just got to love doing it,” said Kendrick, who was recently presented a volunteer award for her years of service to MRC. “It was a very rewarding thing. I got to meet a lot of nice people.”

It will be a challenge for others to match Kendrick’s output. But Blake is doing his part to keep the bags coming.

He even recruited fellow Boy Scouts from Troop 164 to join the assembly line. “They helped me cut out bags so they would be ready to sew,” he said.

Chris and his girlfriend also pitched in, a full-circle moment that made Blake proud to have started the project.  “It was nice to pay everyone at MRC back for helping my brother,” he said.