The art of recovery: MRC helps Mississippi College graphic design instructor Karlos Taylor get back to the classroom after a stroke 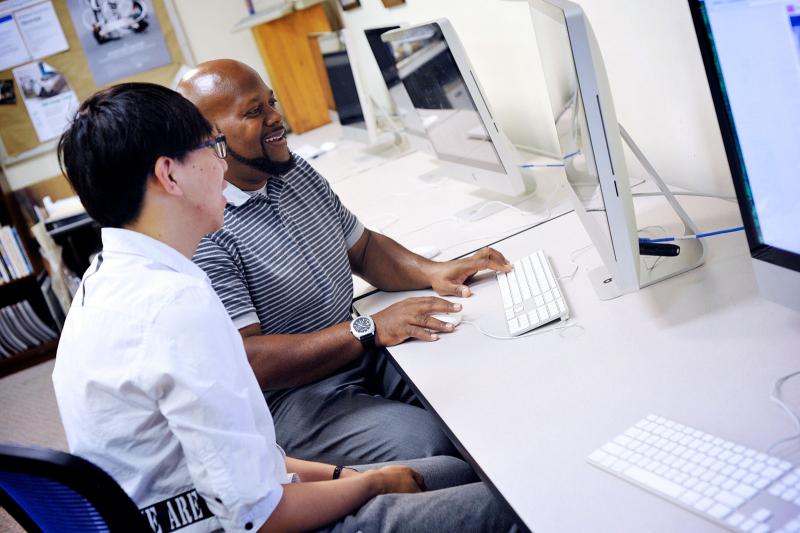 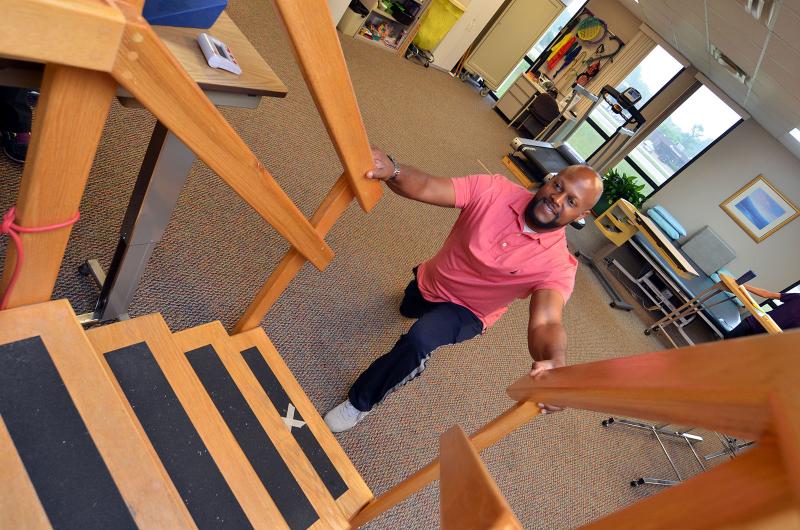 At Quest, MRC’s outpatient program, Karlos Taylor performs exercises to strengthen the muscles that were weakened by having a stroke. 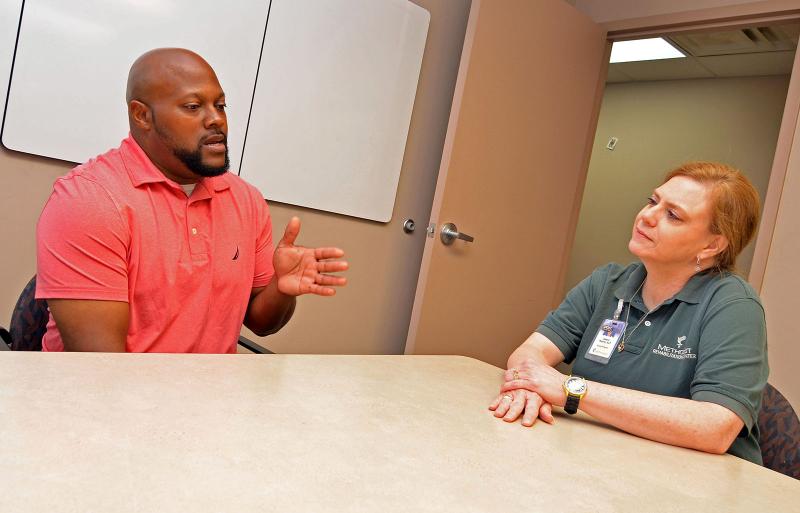 Karlos Taylor chats with Quest speech therapist Cassie Means, who helped him work on his oratory skills to get back to teaching after having a stroke. 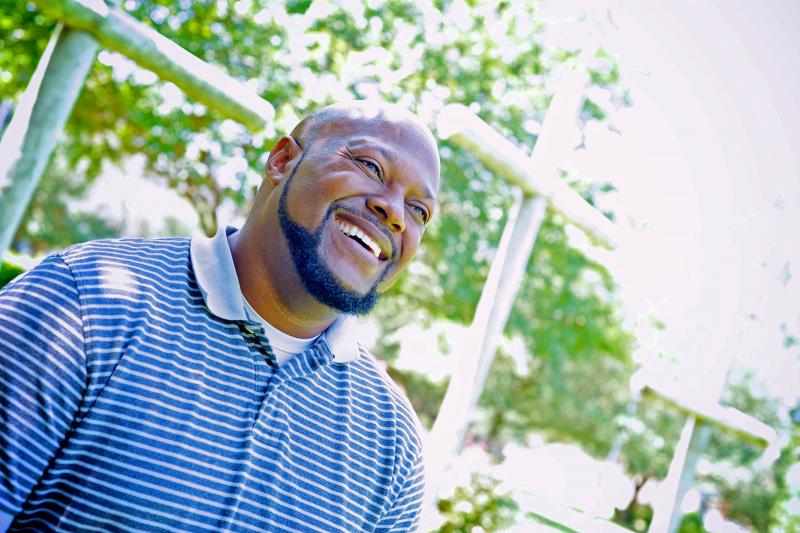 Karlos Taylor, seen here by the crosses that adorn Mississippi College’s campus, says his faith guided him through his recovery. “God chose to keep me here,” he said.

As a graphic design instructor at Mississippi College, Karlos Taylor relies on his artist’s hand and his gift of gab to inspire students.

But after a stroke last year, he found himself stripped of those gifts and unsure if he would ever get them back.

Everything seemed normal the night of October 26. Taylor had been having some headaches, but attributed them to the stress of his job.

“But as I was going to bed, I felt very dizzy,” Taylor said.

Soon, Taylor couldn’t move his right arm or leg and collapsed to the floor. He could barely speak or breathe. His sister called 911, and he was rushed to St. Dominic Hospital in Jackson.

“It was pouring down rain that night and as they carried me out on a stretcher, I could feel the drops hitting the left side of my face but not the right,” he said. “I thought, ‘Why can’t I feel it?’”

Taylor had suffered a cerebral hemorrhage, a devastating type of stroke caused by a blood vessel rupturing and bleeding inside the brain.

“I was in and out for days, I didn’t know what was going on,” Taylor said. “I kept waking up in a different place and seeing different people. At one point I overheard someone say that I had a stroke, and I thought ‘Am I going to be able to walk again?’”

He was in a wheelchair when he started therapy at Methodist Rehabilitation Center in Jackson, some two weeks after his stroke.

“The first thing they told me when I got to MRC was to rest well the first night, because you’re about to work,” Taylor said. “And that was the truth!”

With the help of physical therapist Megan Glorioso and occupational therapist Chuck Crenshaw, Taylor began the work of overcoming his deficits.

“His right side was really weak and very uncoordinated and rigid early on,” Crenshaw said. “He had a lot of trouble with his vision—which was a problem for him because he’s a graphic designer and loves video games. All the things he likes to do are visual.”

“From a physical therapy perspective, his proprioception—that is, awareness of his own limbs—was pretty much nonexistent in his right leg,” Glorioso said.

Taylor said he was a bit surprised at some of the therapies devised for him.

“We encouraged him to play video games because it would help him work on his right hand and his visual perception,” Crenshaw said. “He made real sure that his girlfriend heard me say that.”

Brianna Turner, his girlfriend, was a cheerleader for Taylor during his therapy. “She was a very instrumental part of my recovery,” he said. “She encouraged me by writing scriptures on my dry erase board every day.”

“My kids look up to me—my youngest wants to be an artist just like me,” he said. “But they know me by my drawing. And I knew if they could see me draw again and working on the computer again, they would know I was going to be OK.”

Taylor wasn’t confident he could grip a pencil well, much less sketch like he could before his stroke. But one day in therapy, Crenshaw insisted that Taylor try his hand at painting.

“And I painted a Ninja Turtle—Leonardo,” said Taylor, who is also a huge fan of comic books. “At that point, everyone in the gym was watching what I was doing and it made me feel so inspired. I thought, ‘There is hope for me now.’”

Crenshaw then gave Taylor a sketchbook that he and his sons took turns drawing in.

“The more I did that, the more they became confident in my recovery,” he said.

Getting back on his feet also helped show his boys that dad was going to be OK.

“He was in a wheelchair when he got here and needed maximum assistance to walk,” Glorioso said. “But by the time he left, he was walking mostly with supervision. He made some fast progress while he was here.”

Glorioso used mirror therapy to help Taylor recognize how he was moving his leg. And after finding out that he loved to dance, she incorporated it into his therapy to get him moving.

“I don’t really want to have this publicized, but I guess if I don’t tell it, they will,” Taylor said. “When I was getting ready to leave inpatient, I danced. I did the Nae Nae. And they videotaped me doing it. It was like a victory dance. And it goes to show that they’ll think of anything to make you better.”

After leaving inpatient rehab, Taylor enrolled at Quest, MRC’s comprehensive outpatient program for people with brain or spinal injuries who wish to make a successful return to work, school or home life.

“I had to make a list of my goals when I got there,” Taylor said. “I feel like my therapists at Quest would have done anything to help me reach them.”

One goal was to continue to strengthen his right side, and physical therapist Patricia Oyarce pushed him to reach his potential.

“She would always ask, ‘Are you feeling it?’” Taylor said. “If I was brave enough to say no, she would go to great lengths to reposition me so I could feel it in target muscle groups. She referred to them as ‘sweet spots’—they must have been sweetened with Stevia, because they had a bitter aftertaste.”

His sights were also set on getting back to his teaching post at MC, so he began working with speech therapist Cassie Means.

“Our primary focus was his speech output—his articulation,” Means said. “We practiced that and worked on his speech rate, getting him to slow down to make his speech clearer. We also worked on his endurance, because he said he was getting fatigued easily.”

Taylor said speaking clearly was very important to him as he teaches a number of English as a Second Language (ESL) students.

“She would have me do mock lectures and would give me feedback on how I was doing, testing my endurance, clarity and things like that,” Taylor said. “She even had me reciting poetry! Now, that is cumbersome.”

“He recovered greatly,” Means said. “He was very proactive, and any suggestion I had he would take it to heart. He always gave 110 percent.”

Taylor also wanted to get back to using a computer for graphic design, a goal his physical and occupational therapists worked together on to help him achieve.

Oyarce employed Interactive Metronome (IM) training. During this therapy the user dons headphones and synchronizes hand or foot movements to a computer-generated tempo.

“IM improves attention, motor planning and sequencing,” Oyarce said. “Fine motor skills are so important for working on the computer.”

“I was having trouble using a mouse again, so she introduced me to a vertical mouse, which made it easier for me to click,” Taylor said. “I finished my first graphic design piece since my stroke after about two months of going to Quest.”

Taylor “graduated” from the Quest program on June 3, and returned to teaching the same month.

“I’m glad to be back to work, and I’m playing video games again like a fiend,” he said. “My kids and I play together quite a bit.”

His ordeal has led him to reflect on what caused his stroke. Now 40, he was diagnosed with hypertension at the age of 36, and had been controlling the condition with medication.

“I stopped taking my blood pressure meds,” Taylor admits. “I thought I was Superman. I thought I was feeling OK. But I was ignoring the fact that I was having repeated headaches, because I thought they were from the pressure of my job.”

High blood pressure is called “the silent killer” because it often has no clear symptoms.

“My father died of a heart attack brought on by high blood pressure when I was 5,” he said. “When I had my stroke I thought of him.”

Taylor hopes his story can serve as a warning to others who struggle with hypertension to monitor their health closely.

“I’m living by the mantra of ‘know your numbers’ now,” he said. “And if I have to eat nothing but leaves to stay right, I’ll eat them.”

Taylor feels likes he has been given a second chance by the grace of God, and says he wouldn’t have made it without the support of his girlfriend, his kids, his sister and his church, New Vision Fellowship in Brandon.

“Every day I was in the hospital, someone from my church family would visit me,” he said.

“God chose to keep me here. I think He still has things He wants me to accomplish, like be there for my kids. I’m a living testament for them of the power of prayer.”