Sticking it to pain: Olympic athletes not only ones to enjoy therapeutic benefits of kinesio taping 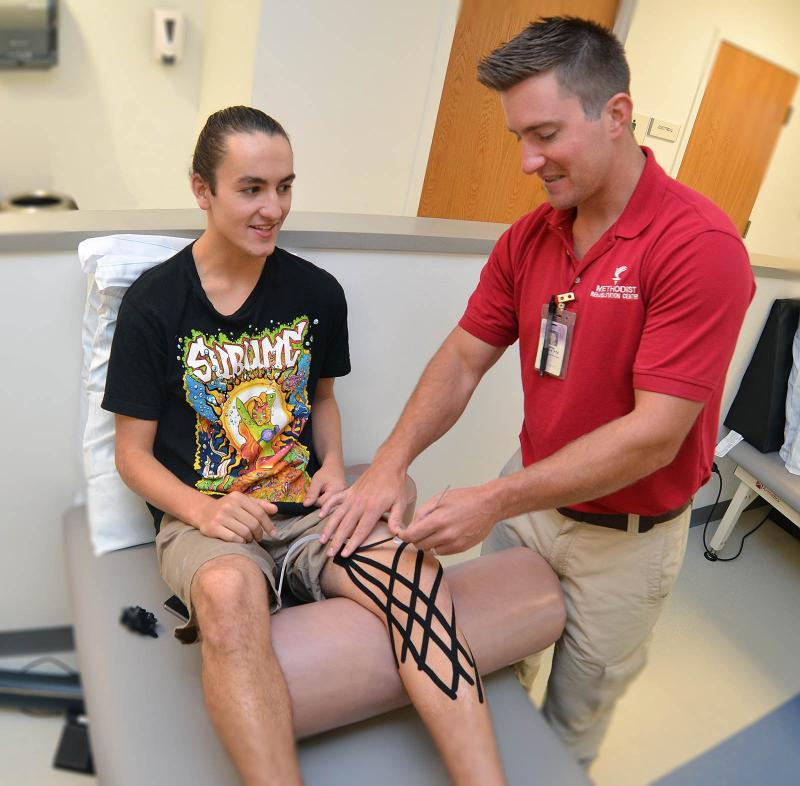 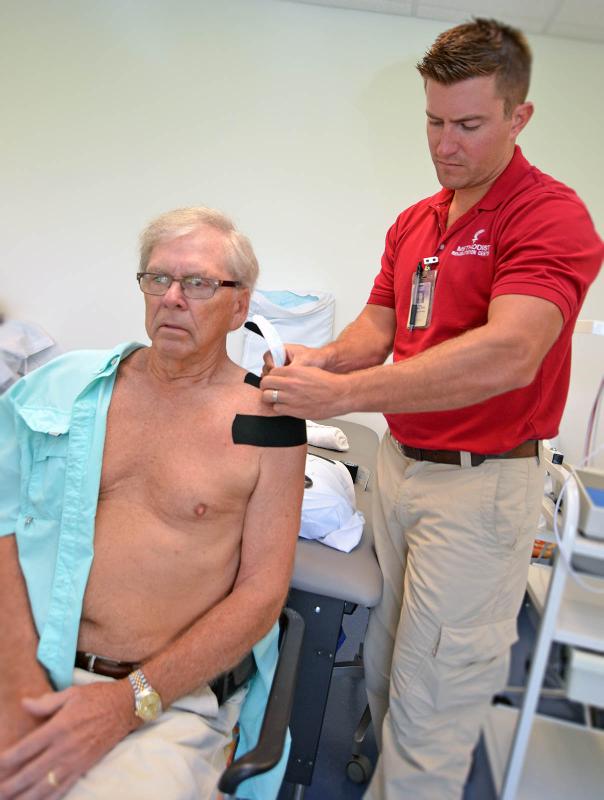 While he awaits surgery for a separated left shoulder, Robert Haseloff of Brandon, left, gets pain relief from the kinesio taping provided by Wes Myers, a physical therapy assistant at Methodist Outpatient Rehabilitation in Flowood. “I can’t believe how much it helps,” Haseloff said.

Robert Haseloff is a 69-year-old Brandon businessman with a bum left shoulder.

But lately he’s been rocking the look of an Olympic medalist.

Like volleyball legend Kerri Walsh Jennings, he’s found muscle support and pain relief via the use of kinesio tape.

“I can’t believe how much it helps,” said Haseloff, the owner of a sporting goods store and a car lot. “I go all day every day and it works great.”

The strips of elasticized cotton first grabbed the spotlight on the backs, abs and joints of elite athletes like Jennings.

But it’s now available to average Joes across Mississippi, thanks in part to the continuing education efforts of Methodist Rehabilitation Center in Jackson.

MRC brought a national expert to town to teach several kinesio taping courses, and the event even drew people from out of state.

“The courses were wildly popular,” said Joe Jacobson, director of outpatient services for MRC. “The first and second sold out.”

Now, a majority of MRC therapists have undergone the training and testing to be certified in the technique. And they say its versatility makes it appropriate for both inpatient and outpatient use.

“It has applications for any area from the head to the toes,” said Steve Friend, a physical therapist with Methodist Outpatient Rehabilitation in Flowood, a division of MRC.

In Haseloff’s case, the benefit has been the stability the tape affords, said Wes Myers, a physical therapy assistant at Methodist Outpatient Rehabilitation.

“You can use it to facilitate or inhibit muscle contracture—it’s all in how you tape it,” Myers said. “I tape a lot of shoulders and a lot of knees. A lot of people will say they saw it on TV.”

Jacobson said therapeutic taping is actually nothing new. It has long been used to bolster injured joints. But Jacobson said tape technology has come a long way from the sticky, stiff material used by athletic trainers

“Now it’s skin friendly,” Jacobson said. “You can leave it on for days. You can even put it on a person’s face for facial paralysis after stroke or Bell’s Palsy.”

Given the rainbow of colors available and the intricate patterns used, kinesio taping can be confused with body art.

Some have mistaken the black web covering Cameron Caloss’ left knee as a tattoo. But it’s definitely not just decorative.

The 18-year-old Jackson resident says he’d still be hobbled by a skateboarding accident if not for the extensive physical therapy and expert taping he has received at MRC.

“I fell six feet straight to my knee,” said the Holmes Community College freshman. “And before I came to MRC, I was limping. After they put the tape on, I started walking normally. I can tell a huge difference.”

Jacobson said tape can be applied to channel fluid away from swollen joints. And that was the initial goal with Caloss. “When the swelling gets better, we will be taping to help proper tracking and alignment of the joint,” Jacobson said.

That’s also the mission with Haseloff’s separated left shoulder, which is so damaged he’s awaiting surgery. “I’m trying to rehab the left shoulder before surgery because it helps it heal faster,” Haseloff said.

A veteran do-it-yourselfer, Haseloff said he tried buying some tape locally for a home application. But he learned it’s better to leave the therapy in the hands of professionals.

“It is more complicated than it seems,” Friend said.

Jacobson said the therapy is often covered by insurance if done by a professional and performed as part of a rehab regimen. But it appears the biggest fans of taping might be willing to pay out of pocket.

“A lot of patients won’t leave without it,” Myers said. “They say: ‘You are going to put that tape on me, aren’t you?’ ”

For more information on services available at Methodist Outpatient Rehabilitation in Flowood, call 601-936-8888.