A yearn for yarn: MSCC resident learns to crochet with guidance of volunteer 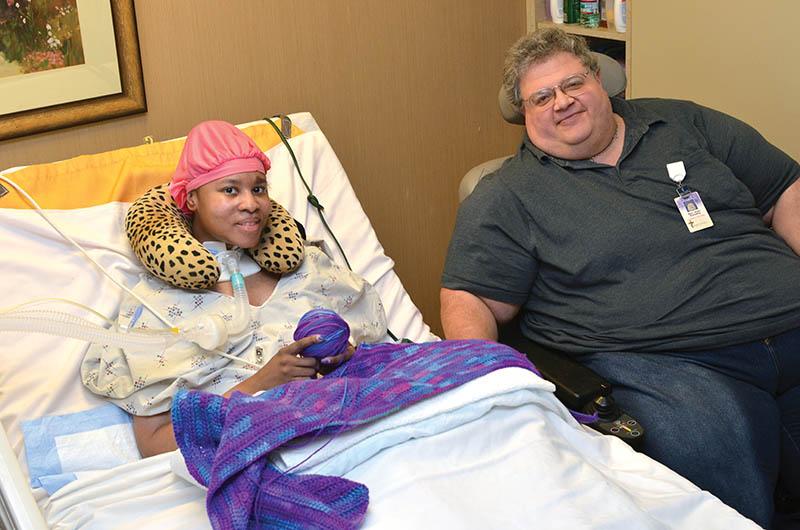 Shonda Brown, at left, shows off the crochet piece the Rev. Alan Kolodny, right, taught her to make.

Most people may have never heard of polymyositis, a rare inflammatory disease that causes muscle weakness throughout the body.

Shonda Brown certainly hadn’t when she was diagnosed with it at the age of 14.

“It just came out of the blue,” she said. “I had never been sick—barely even had a cold. They think I got it from a viral infection, but no one knows for sure.

“They said it was rare for someone like me to get it so young. I’ve never met anyone else with it. I’ve even gone online to see if I could find anyone else that has gone through it. It’s been hard.”

Polymyositis is a chronic condition that has caused Brown, now 28, to be unable to walk and dependent on a ventilator to breathe.

To meet her unique medical needs, she needed to find a long-term care facility. The search led her from her hometown of Dillon, S.C., to Flowood, where she now resides at Methodist Specialty Care Center.

“We’re one of a very few long-term care facilities in the United States with a mission to serve a younger, severely disabled population,” said Larry McKnight, vice president of long-term care for MSCC. “And as the only long-term care facility in Mississippi with a dedicated 24/7 respiratory therapy department, we receive ventilator dependent referrals from all over the southeast.”

Brown says that it was hard at first being away from her hometown and family for the first time in her life.

“I’ve been here since February, and I’m a ways far from home,” she said. “They don’t have any facilities like this close to where I’m from. So when I first got here I was a little homesick.”

Brown had considered facilities as far away as Chicago and Oregon, but MSCC won out for its excellent track record and being closest to home. Having that flair for hospitality the South is known for didn’t hurt either.

“The people here remind me of everyone back at home,” Brown said. “Everyone is so friendly, I like to get out of my room and just talk to the other residents.”

“Since I’ve been here everyone has been very supportive,” she said. “They do a great job helping me stay active. I get to experience life to the best of my abilities.”

MSCC’s volunteer program is a crucial part of that support.

“Our volunteers play a huge role in the day-to-day activities of the residents,” said Robby Scucchi, volunteer director at MSCC. “They are like an extended family, helping them with activities such as arts and crafts, games, spending time with them in a social setting, and even assisting those pursuing further education with school work.”

Through the help of a volunteer, Brown has begun crocheting, a newfound passion that has helped her stay active.

Her crochet coach is volunteer Alan Kolodny, pastor of New Beginnings Community Church in Natchez. He leads worship services on Thursdays, and he and his wife Kathy help residents in any way they can.

“Alan has been as dedicated a volunteer as they come,” Scucchi said. “He and Kathy have been dedicated servants of Christ and have gained the trust of every resident in the facility. They make it a point to try and meet with the new residents and find out what their interests are and if at all possible, assist in meeting those needs.”

When Brown expressed interest in crocheting, he was happy to teach her the ropes of the craft, which was passed down to him by his grandmother when he was a child.

“Teaching someone was a new thing for me,” he said. “She was the first to show an interest in crocheting, and I really didn’t know if any of the residents had enough strength in their hands to be able to do it. To be honest, I wasn’t sure Shonda could when I first went to her room.”

It proved a challenge for both the student and the teacher.

“Shonda has some trouble with her hands, so she has to hold the needle differently than you usually do,” Kolodny said. “We had to find the right kind of needle that she could hold comfortably. So we didn’t jump right in doing anything too advanced.

“I broke it down to doing a little bit at a time in steps, to help her develop muscle memory in her hands. That really helped her get a feel for it. We’ve been building up a little more each week.”

Brown says she, too, wasn’t sure she could master it, but Kolodny’s approach was a great help.

“It can look complicated when you watch someone else do it,” Brown said. “But once he got me doing it hands-on it became easier. I think it’s really relaxing, and it’s good exercise for my hands. Now, I feel like I’m a little expert!”

Kolodny says her dedication has been inspiring.

“She’s so determined, which is amazing, because that’s a big part of learning to crochet,” Kolodny said. “She’s so excited about it, too. She’s doing a great job with it.”

Kolodny says he feels a special kinship with the residents, not only through worship, but also because he is limited in his mobility. He has a rare liver disease and relies on a power wheelchair to get around.

“Because of my limitations, I don’t get out as much as I’d like to either,” he said. “I’m here at MSCC for services on Thursdays and on Sundays I go to preach at my church. I wish I had more time, and was more able to come here to talk and visit. Sometimes they just need someone to lend an ear, someone to care, someone to be there for them.”

Kolodny goes the extra mile to help those in need, and he says seeing that same dedication in the staff is what drew him to volunteering at MSCC.

“I’ve been volunteering here for over 10 years,” said Kolodny, who started shortly after MSCC opened its doors in 2003.

“This is a place where they really do their best to take care of people. They work really hard and have such a commitment to their residents.”