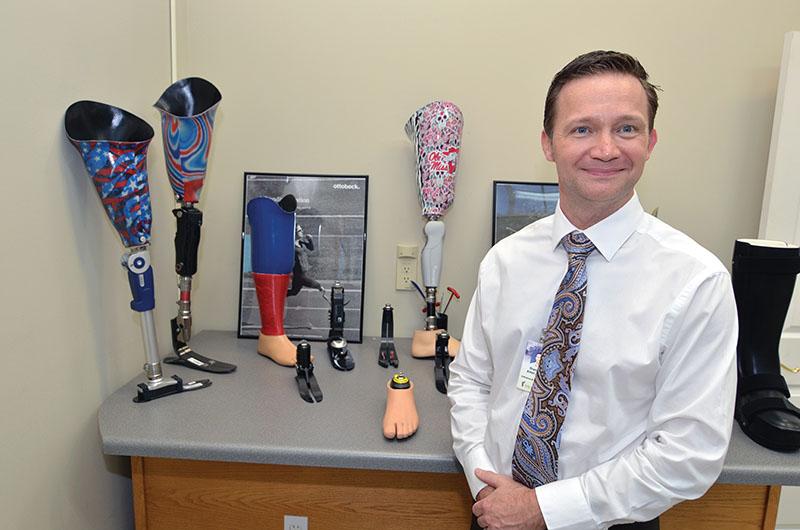 Shannon Aiken shows off some of the devices the Oxford clinic offers, such as custom Ole Miss-themed prosthetic sockets. 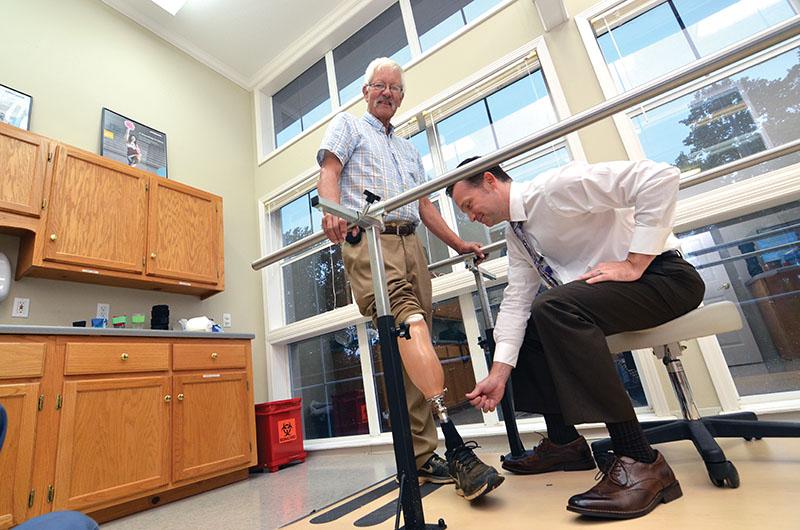 When Shannon Aiken was first introduced to the world of orthotics and prosthetics, he knew he had found his calling.

After graduating from East Carolina University with a degree in exercise and sports science, Aiken was working his first job as a physical therapy technician at the University of North Carolina hospital in Chapel Hill, not far from his hometown of Raleigh.

“I started working with patients that had prostheses and patients that had braces, and found it very interesting,” Aiken said.  “I loved that O&P was a way to help people, but it’s also very mechanically inclined. For me, it was the best of two worlds.”

He says he’s always been driven to help people, but working with his hands is in his blood.

“My father was a mechanic—but he wanted a better life for me and didn’t want me to follow his path,” he said. “So I’ve always been very analytical, almost to a fault. But for this job it’s an asset because it’s all about the fine details.”

Methodist is the largest locally-owned orthotics and prosthetics provider in the state, with locations in Flowood, Hattiesburg, Meridian, Cleveland and Monroe, La.

“Establishing locations throughout the state is important to us,” said Methodist O&P director Chris Wallace. “A lot of people in Mississippi have had limited access to O&P care, and we can bring what we have to offer closer to their local communities.”

Opening in Oxford was the next logical step in that mission.

“It was an area that we unfortunately had a lack of coverage—our Cleveland clinic was the closest,” Wallace said. “The Oxford area is rapidly growing, and the medical community has grown in kind. So we felt like we would be well received there.”

The Oxford clinic opened in late 2015. At first, clinicians from Methodist’s Cleveland location traveled over to see patients as needed.

Physical therapist Heather Suber has established a strong working relationship with the clinic.

“We’re located in New Albany, and there were just no resources in the area,” said Suber, who works with pediatric patients at Baptist Rehabilitation. “First, we worked with Lori Verhage from the Cleveland clinic, and now Shannon. They’ve both been really helpful with our patients, and always readily available.”

Methodist conducted a national search to find a full-time practitioner who could balance clinical care with the management of the location. Aiken has welcomed the challenge.

“My previous job was mainly clinically based,” Aiken said of his position as director of the Center for Orthotic and Prosthetic Care of North Carolina. “Whereas at this job, I’m wearing several hats. I’m more involved in the business and marketing side of things.”

“We’re glad to have found Shannon, as he brings a wealth of experience to the table, having worked in both institutional settings and private settings,” Wallace said. “He is dual certified in both orthotics and prosthetics and that was of great value to us. That allows him to see any type of patient that comes in the door. And his personality fit well with Methodist—he has strong values in doing what is right for the patient.”

Aiken says those shared values are what attracted him to the position.

“When I first interviewed with Methodist, I really liked that they were focused on the patient first and foremost,” Aiken said. “The places I’ve worked before were much faster paced. But it’s hard to learn everything you need to know about a patient with a five-minute exam. We do a very thorough evaluation of everyone that comes through the door.”

Gayle Bullard was one of Aiken’s first patients. A volunteer firefighter from Pittsboro, a small community about 30 miles south of Oxford, Bullard had his lower right leg amputated due to complications from diabetes late last year.

“They had just opened this office, and when I got fitted with my prosthesis I went back to work,” Bullard said. “Having them here has been very convenient. I had to come about every two weeks while they were building my prosthesis, and I come back for a check-up every two months. They’ve been real good to me.”

Aiken says that regular visits are important for new prosthetic users to become accustomed to their new device, and to make necessary adjustments to get the best fit.

“My goal is always for my patients to walk the very best they can,” Aiken said. “You could say, quote-unquote, normal. You want them to be able to walk into a room wearing long pants and no one to know they have a prosthesis.

“That’s why it’s important to take time with each individual patient.  There’s not one perfect device for everyone. One could work for one person, but not for another person with that same identical diagnosis and problem.”

A ribbon-cutting ceremony for the clinic was held in August in conjunction with the Oxford Chamber of Commerce.

Wallace says he has been impressed with the local community’s support.

“Everyone has been incredibly welcoming to us,” he said. “We love our location, and soon we’ll see Baptist open its new hospital just down the road from us. We’re looking forward to further serving the community.

“Over the next two to three years we expect to see the Oxford office continue to grow and thrive.”