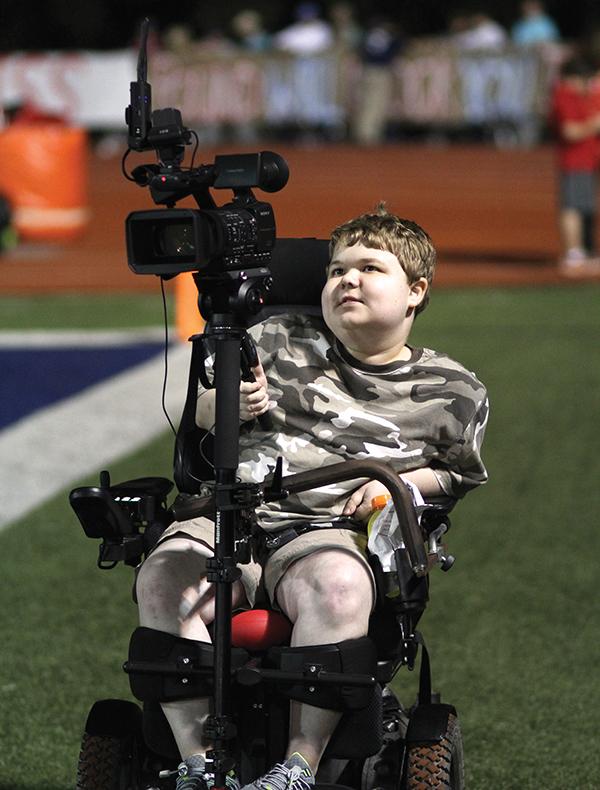 Adam Malone’s custom wheelchair allows for him to capture all the Jackson Prep football action from right on the sidelines.

With a flick of his wrist, Adam Malone rises from sitting to standing. Smiling, he demonstrates how he’s able to greet someone eye-to-eye instead of looking up at them from his power wheelchair.

It’s a welcome change for the 15-year-old, and he has physical therapist Heather Maloney to thank for the new perspective.

As a certified assistive technology professional at Methodist Rehabilitation Center in Jackson, Maloney custom-fits wheelchairs to suit the health and lifestyle needs of her clients.

In Adam’s case, that meant one that would accommodate the activities of a busy high school student—particularly his role as a videographer for Jackson Preparatory School’s football team.

A sophomore at the Flowood school, Adam saw a notice last year about the school’s Broadcast Club.

“There was a meeting after school, so I went to see what it was all about,” he said. “I learned that they were going to do video recordings and live streaming of the football games and I knew I wanted to do that.”

Club sponsor Bobby Gross, director of instructional and media technology at Jackson Prep, said as many as 18 to 20 kids participate in the club. And Adam is a standout.

“I’ve never seen anyone as determined as Adam,” Gross said. “We’ve had to make some adaptations, but we’re making it work and he’s doing a great job.”

Making it work is something Adam and his family have been doing since the day he was diagnosed with muscular dystrophy, a group of diseases that causes progressive weakness and loss of muscle mass.

In muscular dystrophy, altered genes interfere with the production of proteins needed to form healthy muscle. And Adam was 2 when his mother, Angela Malone, noticed he wasn’t developing properly.

“He just wasn’t walking as early as kids normally do,” she said. “Doctors told us it was because he was carried too much, and that he’d eventually walk. But I knew better. I knew in my gut something wasn’t right.”

Until March of this year, Adam was able to walk and get around on his own. But the progressive nature of the disease finally caught up with him.

“Typically, boys with muscular dystrophy stop walking between the ages of 10 to 14,” Angela said. “Adam made it to age 15.”

“Heather helped find the right chair for Adam, and made sure it fit him properly,” Angela said. “She took the time to really talk to him about his needs and added details which make his life easier.”

“The chair has a seat elevator, so he can raise it up,” Heather explained. ”He can also extend it to a full standing position.”

Having that capability allows Adam to be at the right height in the biology lab, which has tables higher than an average desk. In standing mode, he can also be on the same level as his classmates while conversing.

Maloney worked extensively with Adam, querying him on details about his day-to-day activities to determine what add-ons his chair might require.

“Because of his disease, he gets thirsty a lot,” she said. “We added a cup holder so he can have a large cup of water wherever he goes without having to ask someone for a drink.”

The wheelchair also features hooks on the back for his backpack and a handy tray table. “The tray is a place for him to take notes in class, have an iPad or phone, and he can put his food on it at lunch time,” Maloney said.

It took several weeks for the custom chair to arrive, and when it did, Adam needed training in the chair. “I figured it out pretty fast,” he said as he smiled.

Learning to compensate for his disabilities is something Adam has done very well, especially when it comes to his love for football.

“I haven’t always liked football,” Adam said. But that changed when he began playing the Madden football video game.

Although Adam couldn’t play the sport himself, he looked for ways he could participate.

As a freshman, Adam ran a camera from the accessibility deck in the Prep stadium. This year, he’s able to shoot from the sidelines because of his new wheelchair.

Because Adam needs one hand to operate the chair’s controls, Gross came up with an innovative way to secure the camera to a bracket attached to Adam’s chair. That has given him more freedom to move up and down the field to capture plays as they happen.

A small setback for Adam happened on Aug. 22 when he fell at school and fractured the distal plate in his knee. This caused some concern with Adam’s parents, who did not have experience using a transfer board to move him from car to chair.

“Adam had been able to stand up for us to transfer him,” Angela explained. “When he injured his knee, he wasn’t able to stand. We needed help!”

She called upon Joe Jacobson, program director of outpatient services at MRC, and Jennifer Young, a physical therapist at the MRC outpatient clinic in Flowood.

“They were so kind and patient with us,” Angela said. “They spent an hour teaching us how to use a transfer board.”

Adam’s injury resulted in a need for physical therapy, which he also received at the clinic. He is still in a knee brace, so Adam is only able to stand in his wheelchair for about ten minutes at a time.

Now, Adam’s back on the sidelines, and he takes his work very seriously. As he does his job, Adam is focused, blocking out everything except the game and his camera angles.

While it’s common to see a camera on a tripod stand with three legs, Gross designed a custom pole that a local metal fabricator made to clamp a monopod, or single leg bracket, to Adam’s chair.

“Our booster club helped us buy a video transmitter for HD signal, and that has really increased what Adam is able to do,” explained Gross. “He can move up and down the sidelines and follow plays up close. Our biggest challenge now is communication between Adam and the production crew in the press box.”

Adam’s job as a videographer isn’t over when football season ends. “I also film Prep’s basketball games and school plays,” he said.

He’s in the control room for both activities which he really enjoys, but said nothing compares to the thrill of being so close to the action on the football game sidelines.

Chuck Box, the sports information director at Jackson Prep, is proud of the way Adam has learned to shoot video at the games. “He’s a determined and amazing young man and we’re proud of the work he’s doing here at Prep.”

“I see so many possibilities opening to Adam,” said Gross. “When he sets his mind to do something, you can tell it’s going to happen.”

Adam said that he is interested in going into broadcasting as a career and is already looking at colleges.

“We had a college fair at Prep not long ago, and a few schools there had good video departments,” Adam said.

His mom is wishing that he will choose one close to home, but she is confident that Adam will be fine anywhere he wants to go.