Active as ever: Jackson go-getter is better than ever thanks to intensive stroke therapy 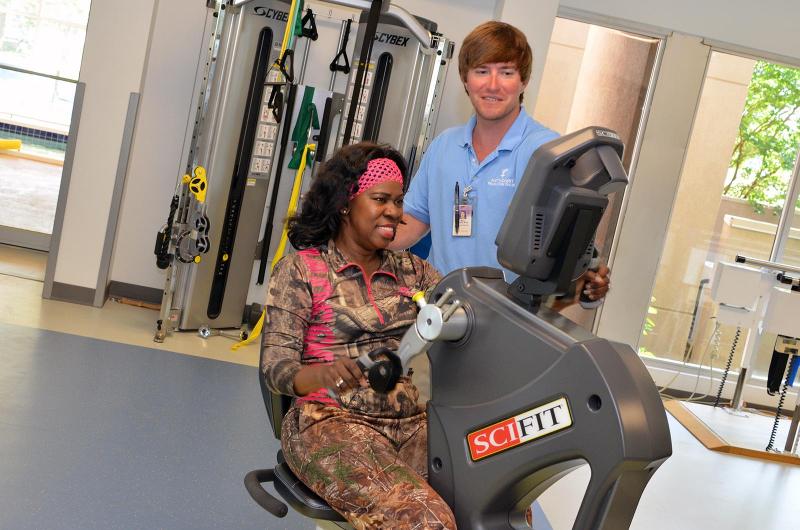 Carol Ann Gaddis works on strengthening her arms with the help of Wes Myers, a physical therapy assistant at Methodist Outpatient Rehabilitation in Jackson. 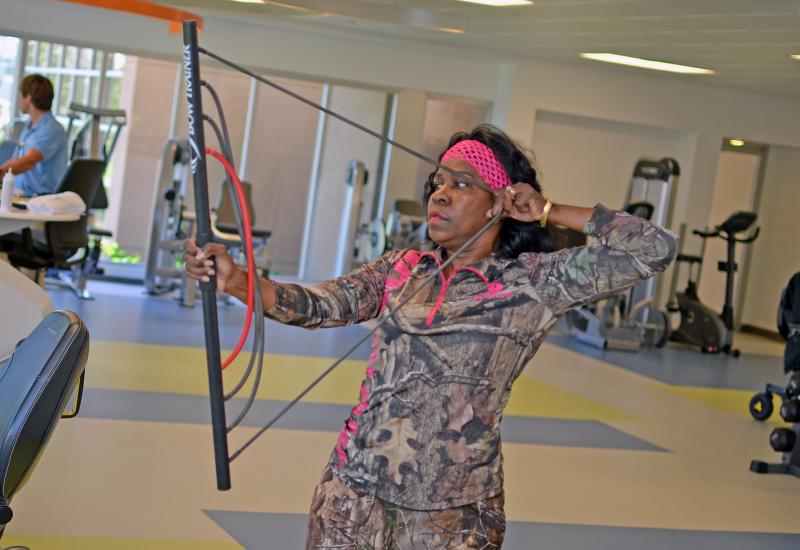 With the goal of getting back to hunting, Carol Ann Gaddis does exercises with a bow trainer at Methodist Outpatient Rehabilitation in Jackson. 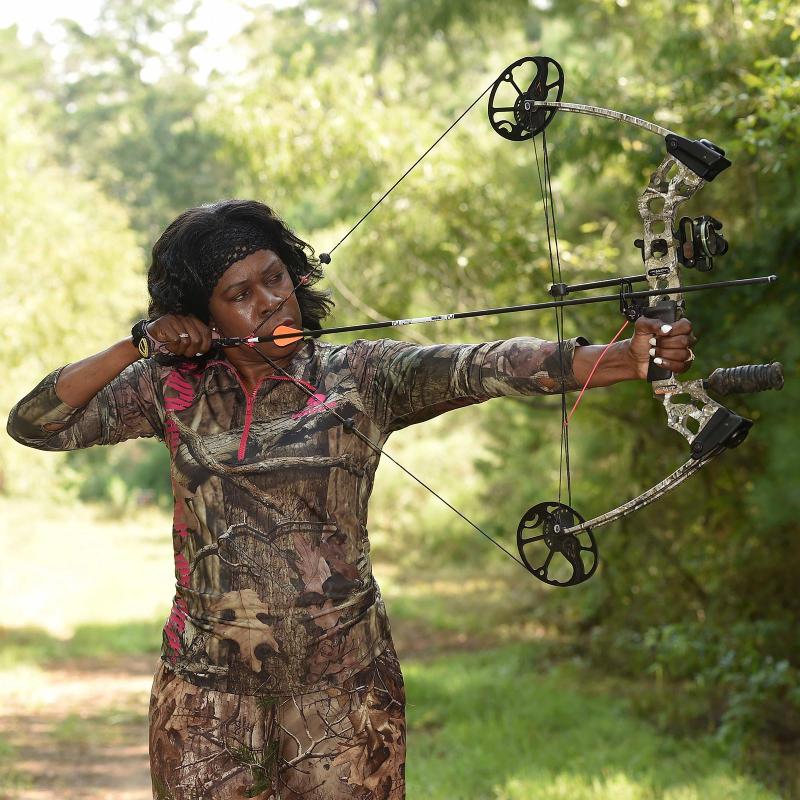 After a stroke left her partially paralyzed, Carol Ann Gaddis feared she’d never hunt again. But after more than a year of intense therapy, she’s back in the woods enjoying deer season.

Two years ago, Carol Ann Gaddis was blowing through life like an overachiever in overdrive.

“She had more hobbies than I thought was humanly possible,” marveled Sydney Sisson.

And Sisson should know. As an occupational therapist at Methodist Rehabilitation Center in Jackson, she helped Gaddis get back to her busy life following a paralyzing stroke.

Today, Gaddis is as active as ever, knitting baby “swaddles” and hats for a Haitian orphanage, sewing custom clothing and enjoying hunting again. “I shot a deer this past season,” she said. “I also started back cooking, and my husband is glad of that.”

Gaddis, in turn, is glad to be less dependent on Larry. After her stroke, she could do little for herself. “He had to give me baths and showers and help me with my clothes and stockings,” she said. “God gave me favor with my husband because he never left my side.”

Gaddis said another “godsend” was the care she received at MRC. “When I got to the hospital, I couldn’t move my whole right side,” she said. “Methodist Rehab has brought me such a long way.”

According to recent guidelines published by the American Heart and Stroke Associations, Gaddis was wise to choose MRC as the setting for her recovery.

The report says stroke patients treated in inpatient rehabilitation facilities achieve greater functional recovery, are more likely to return to community living and have less risk of re-hospitalization than those cared for in skilled nursing facilities or nursing homes.

Gaddis began her journey at MRC’s seven-story hospital, where patients participate in at least three hours of physical therapy, occupational therapy and/or speech therapy five days a week. After discharge, she continued her recovery at MRC outpatient clinics in the Jackson metro area.

“As soon as I got to Methodist Rehab, they started me in therapy,” Gaddis said. “I said: ‘What are y’all doing? I need to rest.’ They were working me. I kept telling my husband, ‘I’m ready to go home.’ Then they sent me to Lisa Indest.”

Indest is a physical therapist at Methodist Outpatient Neurological Rehabilitation in Flowood. And she well remembers Gaddis’ arrival. “She was full of life and excited about all the progress she had made,” Indest said. And everyone enjoyed her outgoing personality.

“She’d always say: Don’t be a secret agent,’” Indest said. “That means when God allows you to heal and recover, you need to go out and proclaim it!”

As Gaddis laid out her priorities—returning to her job, hunting and sewing—MRC staff devised activities to help her regain needed abilities.

She worked on driving skills with occupational therapist Ashlee Ricotta, one of but four Certified Driving Rehabilitation Specialists in Mississippi. “I’d have her drive as if she was showing someone a house because I wanted to make sure she was safe with divided attention tasks,” Ricotta said.

To get strong enough to hunt again, Gaddis exercised with a bow trainer and a weighted T-bar rigged to resemble a gun. “She took to that right away,” said physical therapist Joe Jacobson, director of outpatient services at MRC. “With the T-bar, she gradually worked up to the weight of a rifle and scope.”

To make sure Gaddis was stable enough to navigate uneven surfaces, MRC physical therapist Erin Perry focused on building her balance and endurance. One strategy was walking sessions with the Bioness L-300. The wearable device uses low level electrical stimulation to activate weakened nerves that control muscles in the leg.

Some patients become lifelong users of the L-300, but not Gaddis. “She had enough carryover from the therapy that we didn’t have to worry about purchasing a device,” Perry said.

While Gaddis reclaimed her walking ability fairly quickly, her right arm remained a painful problem. “She wouldn’t even let us touch it when she first got here,” said MRC occupational therapist Allison Harris. “And she couldn’t write at first.”

“My fingers had drawn up and I would have to peel my fingers back,” Gaddis said. “And I used to squeeze my arm to my side because it would hurt.”

Gaddis said she turned to prayer to turn the tide. “I believe God heard my cry,” she said. “I told my hand you are going to move and going to function like God wants you to function. I kept looking at my thumb and thinking in my mind, ‘Thumb move,’ and it started moving. And I said, ‘If that moves, my fingers are going to move, too.’”

Gaddis said she eventually gained the ability to clap her hands and praise the Lord at church. And she now counts MRC staff among God’s instruments. “I would hear the Holy Ghost saying, you’ve got to do everything they tell you to do and don’t cheat!”

Gaddis’ final stop before “graduating” from MRC was a long stint at its Quest facility in Jackson. The outpatient program employs psychological counseling, job coaching and physical, occupational and speech therapy to help brain and spinal injury survivors successfully return to work, school or home life.

Peer support is also a big part of the program, and Gaddis was eager to offer encouragement to others. “I’d say: ‘I couldn’t move my arms or legs, but look at me now,’’’ she said.

“She has done better than anyone thought she would,” Jacobson said. “She was easy to motivate because she had those things she wanted to get back to.”