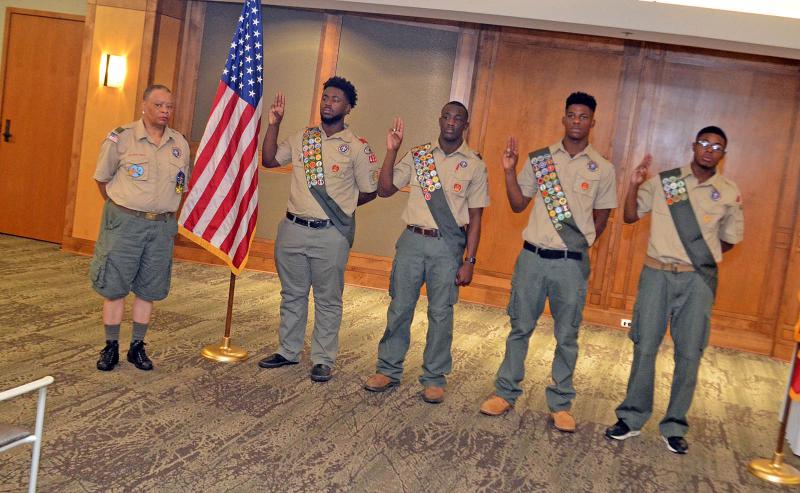 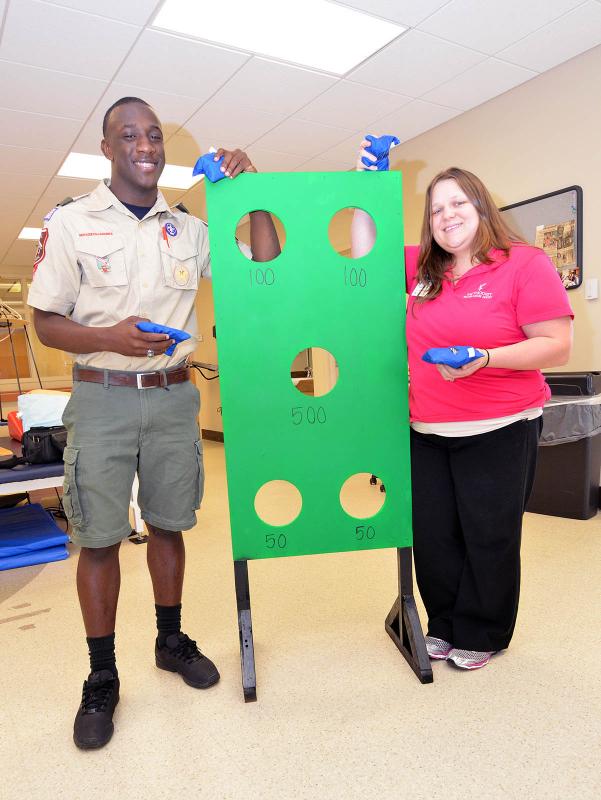 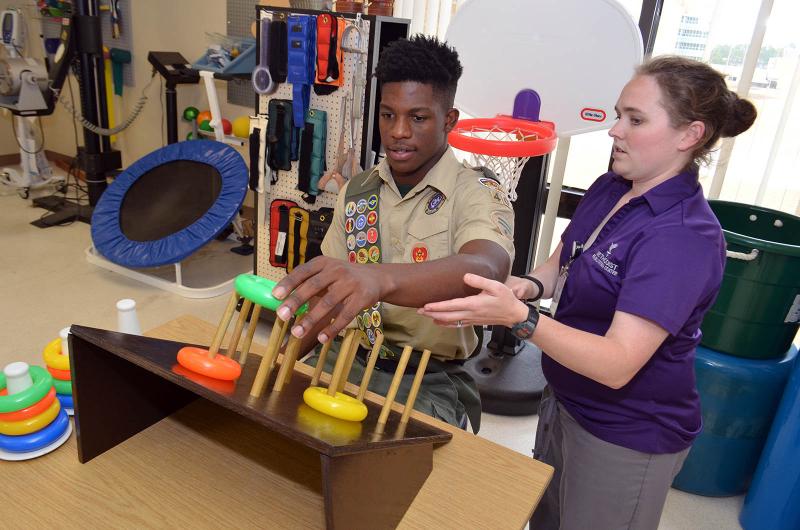 Methodist Rehabilitation Center occupational therapist Bonnie Lahuta demonstrates to Troop 401 Eagle Scout Deshuntez Williams how she will use the therapy device he built to help spinal cord injury patients who have difficulty raising their arms.

Only 4 percent of all Boy Scouts make it to Eagle, the highest rank. It’s an honor even more significant for four young black men from Jackson. Only 1 percent of black Scouts reach Eagle.

“It’s been like reaching the end of the road on a long journey,” said Brent Price.

Price, Deshuntez Williams, Marcello Williams and Jerion Keyes are all scouts from Troop 401, sponsored by Methodist Rehabilitation Center, a Jackson inpatient rehabilitation hospital. The four were presented their Eagle at a Court of Honor held at the hospital on Dec. 17.

“Getting my Eagle has made all the hard stuff we’ve been through—like sleeping in the woods and being scared of raccoons—worth it,” Keyes said. “We’ve grown into a brotherhood. Boy Scouts has developed us into men. We’ve learned the leadership skills required in order to be successful in life.”

“It’s helped me deal with some issues. I wasn’t a very social person,” he said. “Now I have friends for life.”

For a troop with only 16 active scouts, having four Eagles in one year is a remarkable achievement. Troop 401 has produced 27 Eagle Scouts.

“On a yearly basis, you have about 200 or so Eagle Scouts to come out of the Andrew Jackson Council here in central Mississippi,” assistant scoutmaster Steve Cooper said. “If you divide that by the number of troops, that’s roughly 4 to 5 per troop, but in that you have big units like Troop 1 that are 150-member troops.

“So if you consider the size of our troop, as well as the fact that our kids come out of south and west Jackson, out of rough neighborhoods, to see four of them earn their Eagle, well that’s just spectacular.”

Troop 401 was founded at MRC in 1989 to introduce scouting to boys with disabilities. When current Scoutmaster Betty Dorsey-Wilson took over in 1998, the troop began to include the children of employees. Today, the troop focuses on disadvantaged youth in the Jackson metro area.

“I brought my son into the scouts after he crossed over from the Webelos,” said Dorsey-Wilson, a therapy technician at MRC, who has been with the hospital since it opened in 1975. “MRC’s scoutmaster at the time was leaving, and I was asked to take over. I studied scouting and ended up earning my Wood Badge—it’s like the Ph.D of scouting.”

“I’ve stuck with this troop throughout my adolescent and adult life because I have a bond with these guys,” Wilson said. “Being a Eagle Scout myself, and seeing these four guys grow up since elementary school, it really warms my heart to have seen them come this far.”

Cooper is another former troop member who earned his Eagle.

“This troop was my starting ground for scouting,” Cooper said. “I went on to become the 2015-2016 lodge chief—that’s the highest scouting youth position in the council. I’ve been to national scouting events, I’ve seen the highest level. But coming back home and being able to see four scouts that I led through daily activities earn their Eagle, that’s a wonderful thing.”

The scouts have given back to MRC by donating their Eagle projects to the hospital. All four have built devices for therapy.

“Most of our projects are giving back to MRC,” Dorsey-Wilson said. “Eagle projects have to be for a nonprofit organization, and we always like to do what we can to say thank you back to MRC for sponsoring our guys.

“If it wasn’t for MRC and the employees here who help me with fundraisers and donations, these boys would never have had an opportunity to be part of scouting or able to achieve the things that they have done.”

The scouts visited MRC to familiarize themselves with the rehab process and to get ideas for what type of devices were needed.

“Because we’re sponsored by MRC, I think it’s very important for them to understand what rehab is and what services we offer, so we do what we call a disability awareness class,” Dorsey-Wilson said. “There is also a merit badge for disability awareness.”

Price and Marcello Williams both built separate bean bag toss devices that are useful in therapy for patients to regain fine motor skills.

“I really wanted to help the patients out, to help them get their strength back because my aunt recently suffered a stroke too,” Marcello Williams said.

“I was inspired by my next door neighbor who had a stroke,” he said. “The ring toss helps with the patient’s movement of their hands.”

The foursome’s projects exemplify the Boy Scouts’ slogan, “Do a good turn daily.” It’s a motto Dorsey-Wilson says she has taken to heart in her 15-plus years as Scoutmaster of Troop 401.

“When I was diagnosed with breast cancer and had to take chemo, it was very, very hard,” said Dorsey-Wilson, who was diagnosed in 1999. “But when my guys found out I was ill, they were all so sad and they gathered around me saying, ‘Miss Betty, we’re not going camping unless you go.’

“From that day forward, I realized that my strength came from doing for other people, and that’s what scouting is all about. It makes me feel good to know I made a difference in these kids lives, and also hopefully the ones yet to come along.”

In late December, Dorsey-Wilson was in an auto accident and suffered multiple injuries. She is now rehabbing at MRC, where her scouts are once more showing their support. She hopes to return to her role as scoutmaster as soon as she is able.

Troop 401 is currently raising funds for 2017 activities. To make a donation, visit www.gofundme.com/boy-scout-troop-401-jackson-ms.