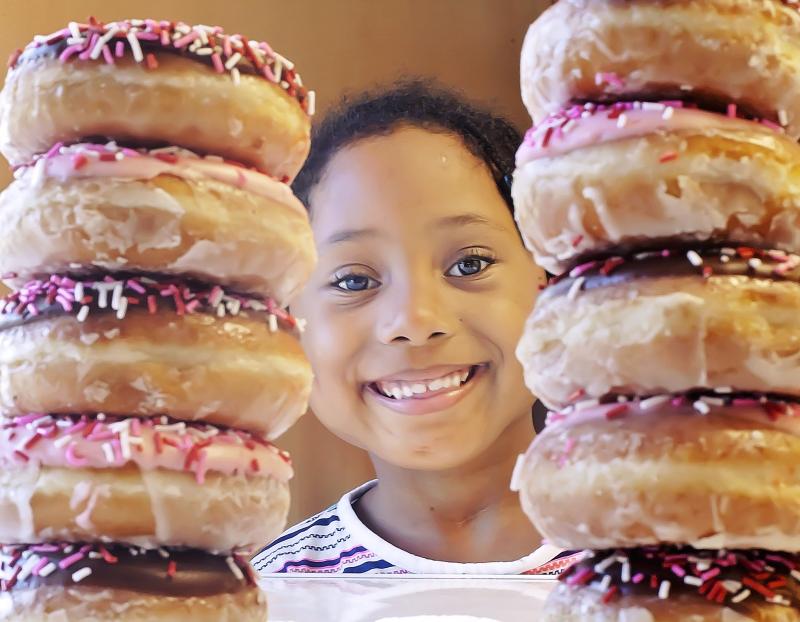 Taylor Brown, 7, is giddy about gobbling up all her favorite foods now that surgery and therapy have helped her overcome a locked jaw. 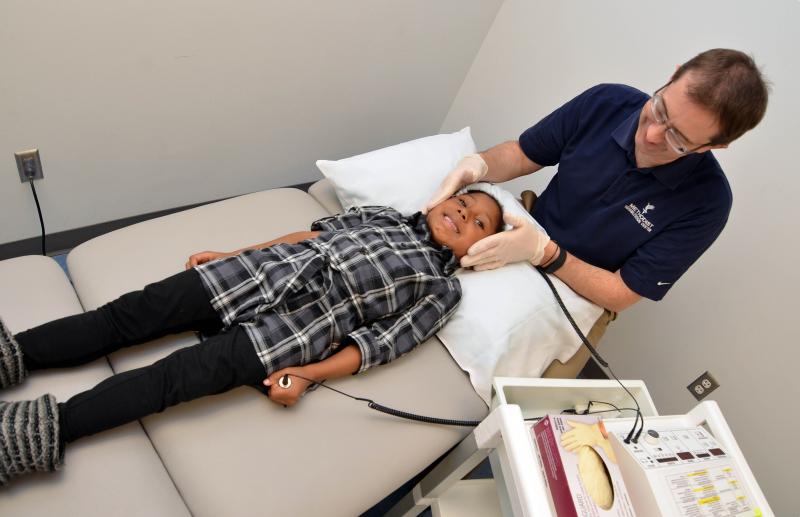 Joe Jacobson, a physical therapist at Methodist Outpatient Rehabilitation in Flowood, uses a therapeutic device known as the HIVAMAT 200 to work on tightness in Taylor Brown’s jaw. The device uses an alternating electrostatic field to create deep oscillation pulsations that can help with swelling, muscle tension and fibrous build-up from surgical trauma. 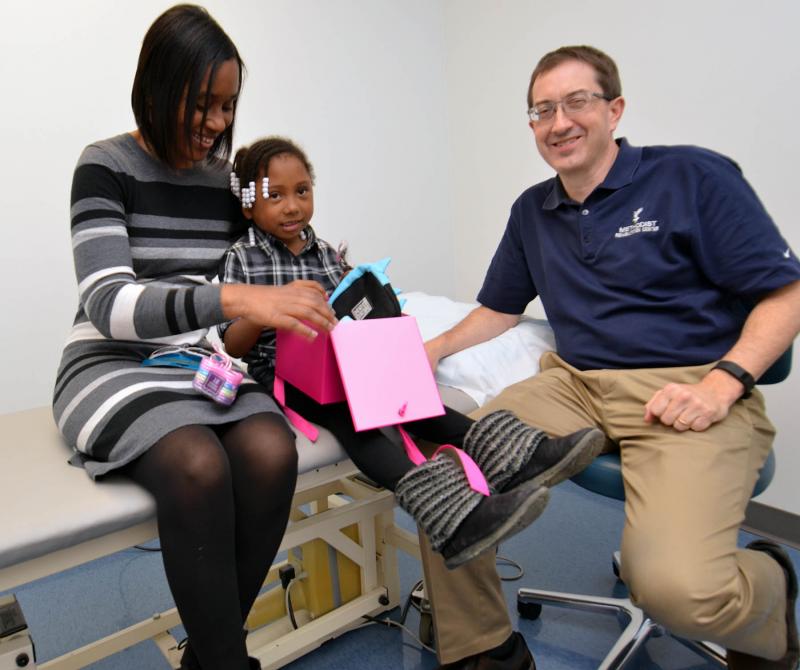 Taylor Brown and her mother, Tamika Winters, check out a toy gift box created just for the 7-year-old at Methodist Outpatient Rehabilitation in Flowood. MRC physical therapist Joe Jacobson, at right, said taking home a toy from the box was her reward for cooperating with her sometimes painful therapy. 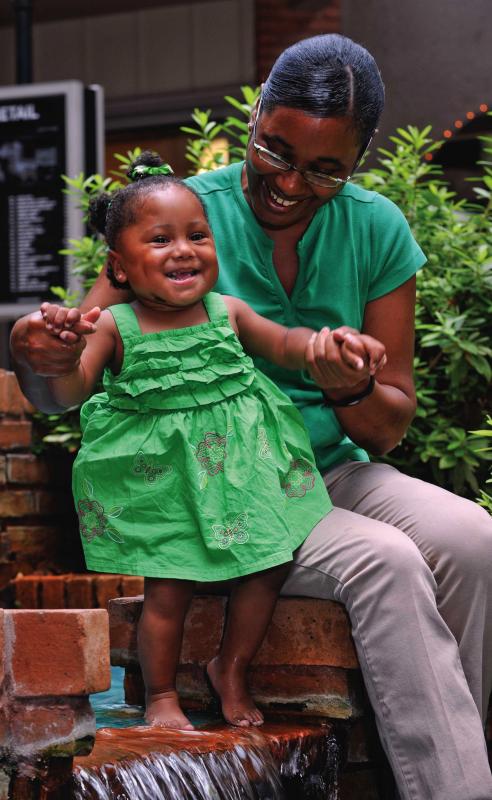 Surgery started at age 2 to correct Taylor Brown’s damaged jaw. And her mother, Tamika Winters, said Taylor was a trouper throughout a recovery that took years.

Most people do it all day without thinking.

They open their mouths to talk, to eat, to yawn, to laugh, to sneeze and more. It’s all made possible by a pair of ball and socket joints that move the mouth open and shut on demand.

But what if those essential joints eroded, locking the mouth shut?

It’s the scenario Taylor Brown of Brandon has lived with for most of her seven years.

So you’ll have to forgive the giggly second-grader if she gets a bit giddy around all her favorite foods now. Her new ability to binge on everything from Krystals to Krispy Kremes was more than six years in the making.

Taylor’s latest treatment brought her to Methodist Outpatient Rehabilitation in Flowood, where she finished almost a year of specialized physical therapy in October.

“They were wonderful,” said her mother, Tamika Winters. “Whenever Taylor didn’t want to do therapy, they were patient and waited until she calmed down so they could finish. She’d get tired, but she’d take it like a trouper.”

While Jacobson has years of experience using manual therapy, he expected Taylor wouldn’t be an easy case.

“The big challenge with her is the therapy can be painful, and she’s a kid,” he said. “I was going to have to put my fingers in her mouth to stretch it and open it. Initially, she was a little bit of a problem.”

“The first time, I would fight him,” Taylor admits. But she said she liked that Jacobson “let me bite his fingers.”

It also helped that Methodist staff bought toys for Taylor, and she was allowed to take one home after every therapy session. “Once that started, it made a big difference,” Jacobson said. “She was a very good sport.”

A veteran of three surgeries, Taylor certainly is no stranger to medical settings. She was just a baby when a bacterial infection damaged her temporomandibular joints. And it wasn’t just her ability to eat that was affected.

The then 2-year-old would have obstructive episodes some 200 times an hour, he said. So something had to be done.

“Because her jaw was severely recessed from her previous TMJ infection, she either had to have a tracheotomy (a surgical procedure that opens up the windpipe) or her jaw moved forward to treat her obstructive sleep apnea,” Caloss said.

Slowly pushing apart the bone to lengthen her lower jaw proved the preferred method, and the procedure reduced Taylor’s obstructive episodes to two an hour.

But her eating problems weren’t so easily resolved. A few years after her first surgery, Taylor developed ankyloysis in her jaw. Her TMJ had fused, causing abnormal stiffness and immobility.

While she could eat some soft foods by mouth, “she was failing to thrive,” Caloss said.

“She wasn’t getting enough food, and she was just so small,” said her mother.

“It got so bad, she had to have a feeding tube,” Jacobson said.

Fortunately, this was around the same time that doctors decided to schedule an artificial joint replacement for Taylor. At age 5, she would become one of the youngest patients to undergo the surgery at UMMC.

Caloss said implanting the metal ball and plastic socket took about four hours and was “very complicated” because of Taylor’s abnormal anatomy.

“I was worried about the anesthesia and how she would react,” Winters said. So she was grateful all went well.

Taylor underwent another surgery about a year later to clear out scar tissue and extra bone that had grown around the joint. And Winters said she was no less nervous the second time around.

“It terrified me,” she said. “She was in there eight hours, and they were planning on four. The scar tissue was just so bad.”

After surgery, Taylor still needed therapy to restore normal movement in her jaw. And on Caloss’ recommendation, the job fell to Jacobson.

In addition to the manual therapy at Methodist, Taylor also underwent ultrasound and sessions with a therapeutic device known as the HIVAMAT 200.

The device uses an alternating electrostatic field to create deep oscillation pulsations. The treatment is gently delivered via the hands of therapists and helps with swelling, muscle tension, poor blood circulation, sprains and strains, fibrous build-up from surgical trauma, arthritis and other degenerative joint problems.

The soothing therapy was a favorite of Taylor’s. “She’d even go to sleep,” said her mother. “Then Joe would have to wake her up, and she didn’t like that.”

The burden of getting a somewhat reluctant Taylor to therapy fell on her parents, and her medical team said their commitment was critical to her care.

“It was hard to get her to therapy when she was at school and I was at work,” Winters said. But everyone worked with the family’s schedule, and Winters said she could tell the therapy mattered.

“Pretty much from the get-go, I could see the difference,” she said. “One particular time, we went there and her jaw was so tight. But after they used an instrument on her, it was, Wow! She went from this number to that number and it was a blessing. Without the therapy, she wouldn’t have gotten so far.”