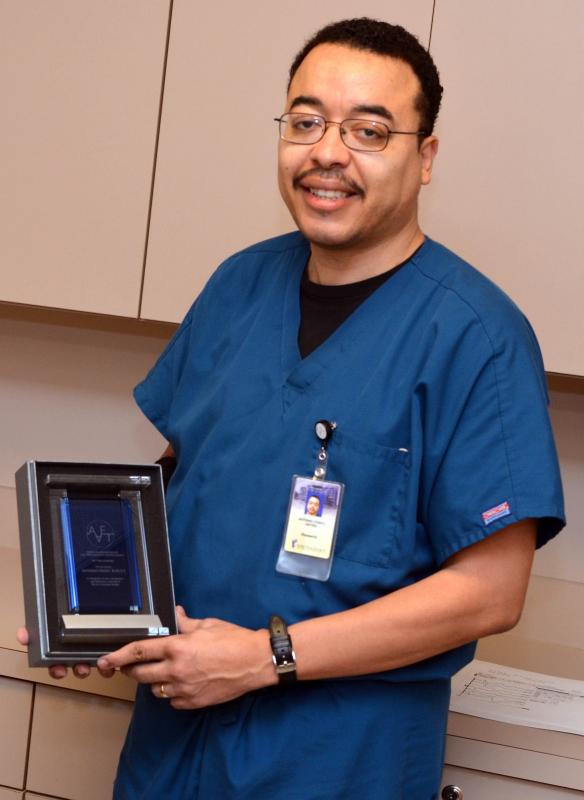 Tony Hayes shows off his 2017 Tech of the Year award from the American Association of Electrodiagnostic Technologists. 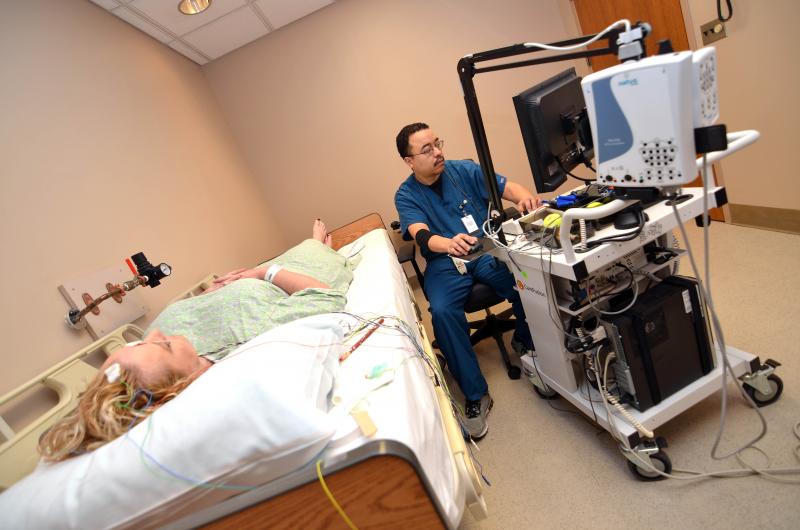 A neurophysiological technologist at Methodist Rehabilitation Center in Jackson, Tony Hayes tests patients like Nicole Olivo of Lena, at left, to see if their nerves are functioning properly. Such studies can help diagnose nervous system injuries or disease.

Tony Hayes of Jackson nearly missed the April ceremony where he was named 2017 Tech of the Year by the American Association of Electrodiagnostic Technologists.

But Hayes was determined not to miss the recognition. Kudos can be hard to come by in his profession. He literally gets on people’s nerves for a living.

“I stimulate nerves with electric signals to see if they are functioning properly,” explained Hayes, a neurophysiological technologist at Methodist Rehabilitation Center in Jackson.

Because the procedure requires Hayes to zap subjects with tiny jolts of electricity, he rarely expects praise from patients. But he has gained the respect of Methodist physicians and researchers, who rely on his skills to help diagnose nervous system injuries or disease.

It was a notable gesture considering Leis’ credentials. He is a recognized expert in electrodiagnostic medicine, having authored two books on electromyography and served as an invited examiner on the American Board of Electrodiagnostic Medicine.

A graduate of Jackson State University with a degree in biology/pre-medicine, Hayes had been working in an animal research lab when he interviewed for the Methodist job in 1997. And although Methodist doesn’t do animal research, that experience helped Hayes secure the position.

“I had somebody else in mind at first,” said Dr. Dobrivoje Stokic, administrative director of the Center for Neuroscience and Neurological Recovery, the research arm at Methodist. “But the minute I spoke to Tony, I knew I would hire him. He had lab experience and knowledge related to muscle function. And I knew that would be beneficial.”

“Over the years, Tony has contributed significantly to our work by conducting high quality research studies,” Stokic added. “And we look forward to many more in our recently opened NeuroRobotics Lab.”

Hayes has participated in seven peer-reviewed and published research papers. But that’s not all that sets him apart. In his spare time, he is also working toward a medical degree through the International University of the Health Sciences School of Medicine.

It’s a challenging pursuit, but Hayes has gotten plenty of encouragement from coworkers. “The reason I’ve been here 20 years is people have been supportive of all my endeavors,” he said.

Leis stepped up to meet the medical school’s requirement that Hayes work with a physician a specified number of hours. And Hayes says, “He taught me everything I know about private practice.”

At Methodist, Hayes mainly does nerve studies on patients who have sustained nerve damage via strokes, brain and spinal cord injuries and other disabling injuries and illnesses.

“I’m privileged to do this work and it’s exciting,” Hayes said.  “I’ve got access to unique patients and this is a field where a lot is not known. So if you find something, you’ve turned on a pen light in a dark room.”

He’s particularly proud of his role in helping improve the treatment of spasticity. The condition causes painful spasms and abnormal postures and commonly afflicts people with acquired brain injuries.

Sufferers with severe cases typically seek relief from a surgically implanted pump that delivers anti-spasmodic medicine near the spinal cord. And Hayes was part of the research team that developed a non-invasive way to objectively measure responsiveness to the drug and verify suspected system malfunctions.

As the technologist for the study, Hayes performed more than 3,500 electrodiagnostic tests. And he says it was worth all the work to be able to make a difference in the lives of Methodist’s patients.

“It might take 20 years for something from a traditional research lab to show up in a doctor’s office,” he said. “But if we find a better way, we start doing it.”