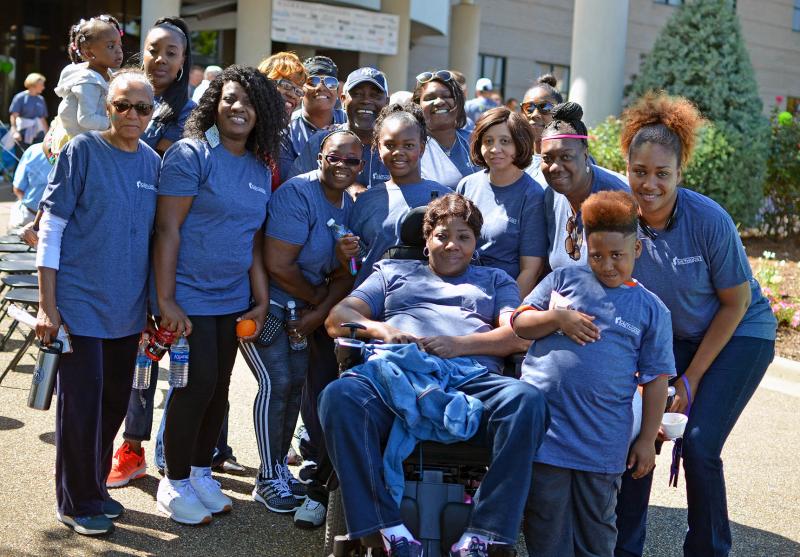 Annette Young of Jackson has a heart of gold, say her former coworkers at Wal-Mart in Clinton.

“If anyone fell on hard luck, she’d say: We’ve got to get out on the sidewalk and raise some money,” said Wal-Mart manager Eddie Robinson. “If you needed something done, she was always the one to go to. And it takes a very special person to be thinking of someone else no matter what they’re going through.”

Today, Young can’t do as much as she used to. She was diagnosed with spinal cancer in 2016 and subsequent surgery left her paralyzed from the chest down. But from the seat of her power wheelchair, she still inspires folks to support good causes.

To honor Young, Wal-Mart stores in Clinton, Jackson and Flowood recently donated $2,000 to Walk & Roll, a fundraiser for the Wilson Research Foundation at Methodist Rehabilitation Center in Jackson. And Robinson recruited a team of about two dozen to join Young at the April event.

Methodist treats and does research on disabling conditions such as stroke and brain and spinal cord injuries. And its annual walk typically draws plenty of former patients like Young.

Even so, Young initially believed she might feel out of place at the outdoor gathering. “I hadn’t been out of the house since December when Eddie told me they were doing this,” Young said. “And I was nervous about seeing my coworkers.

“But they gave me a lot of love. I’m blessed to work for a company that cares so much. Eddie is always calling me. He doesn’t let me down at all.”

There’s a reason Robinson understands the impact of paralysis. “I have a brother who broke his C-5 vertebra in 1996,” he said. “And they told him he might never walk again. But he’s walking and running now. He’s the head basketball coach at Warren Central High School in Vicksburg.”

Since both his brother and Young rehabbed at Methodist, Robinson said he was well aware of the hospital’s expertise. So when family friend and Methodist occupational therapist Bridgett Pelts asked his store to contribute to Walk & Roll, he was all in.

“It’s a big event and it can help a lot of people,” Robinson said.

Chris Blount, executive director of the Wilson Research Foundation, said it’s common for walk supporters to have a personal connection with Methodist.

“We raised more than $86,000 this year, and the majority came from individuals and business representatives who’ve seen what our research means to someone with a disabling injury or illness,” Blount said. “When we discover ways to improve the rehabilitation process, our patients are the first to benefit.”

“I know I couldn’t have it made it without those two,” she said. “You have no idea how hard it was to leave them. They treated me like family.”

To ease Young’s transition home, the two therapists focused on abilities that would bolster her independence. “Stephanie taught me how to write again with my right hand, how to hold a spoon again and how to bathe myself,” she said.

Long focused on fitting Young with the best power wheelchair for her needs and teaching her how to safely maneuver the device. “I had her negotiating crowded rooms to have her mimic getting out in public,” he said. “She wanted to visit her coworkers.”

As Young and crew navigated the Walk & Roll path around Mirror Lake in Flowood, she got the chance to catch up with her coworkers. And she said like her time at Methodist, it was a healing experience.

“I know everyone is going on with their lives, but they never let me forget they are thinking about me,” she said. “And an encouraging word goes a long way.”