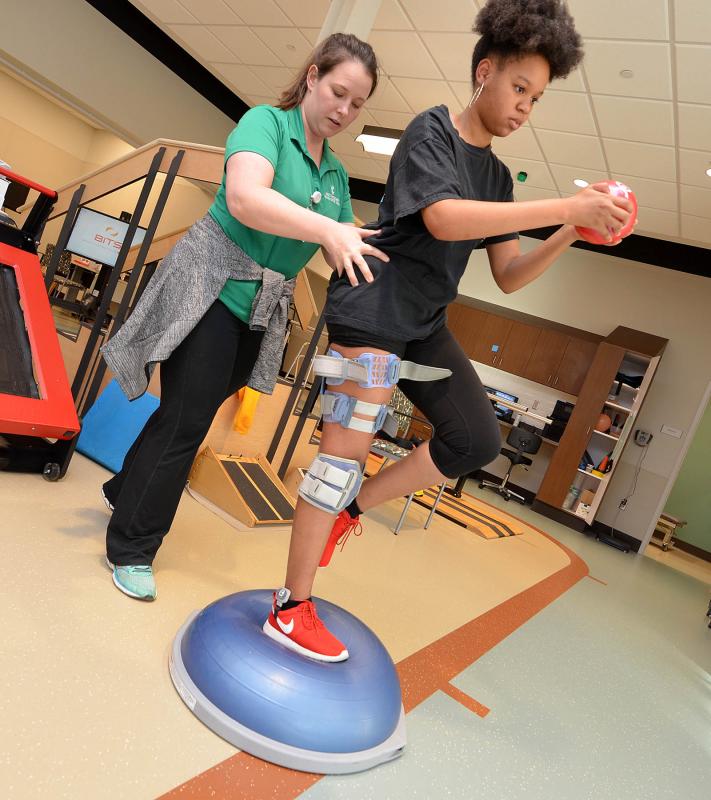 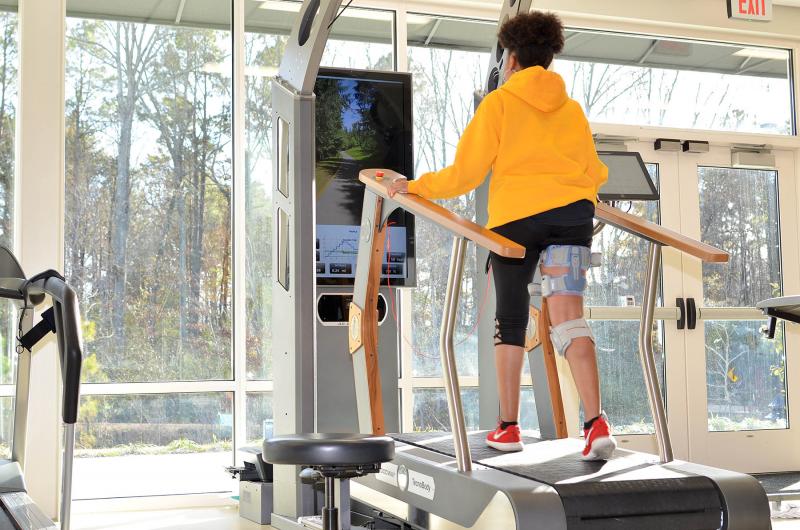 At Methodist Outpatient Therapy in Ridgeland, Mar'Shanna Graham fine-tunes her walking ability on a specialized treadmill. Equipped with virtual reality features, the treadmill gives users visual and auditory feedback as they work on therapy goals. 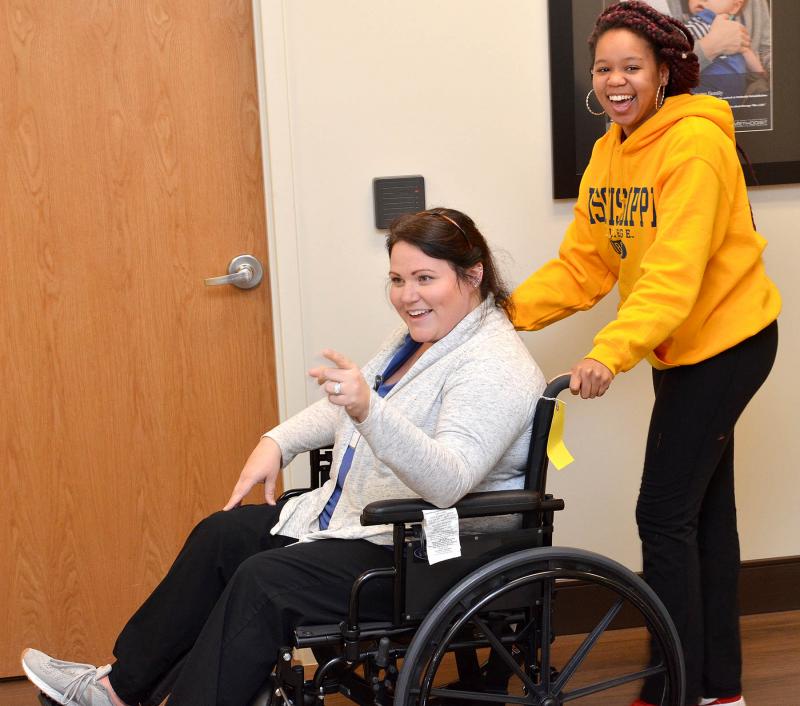 At Methodist Outpatient Therapy in Ridgeland, Mar'Shanna Graham works on skills she'll need when she enters nursing school in the fall. She and occupational therapist Kari Richeson share a light moment as she practices pushing Richeson around the clinic in a wheelchair. 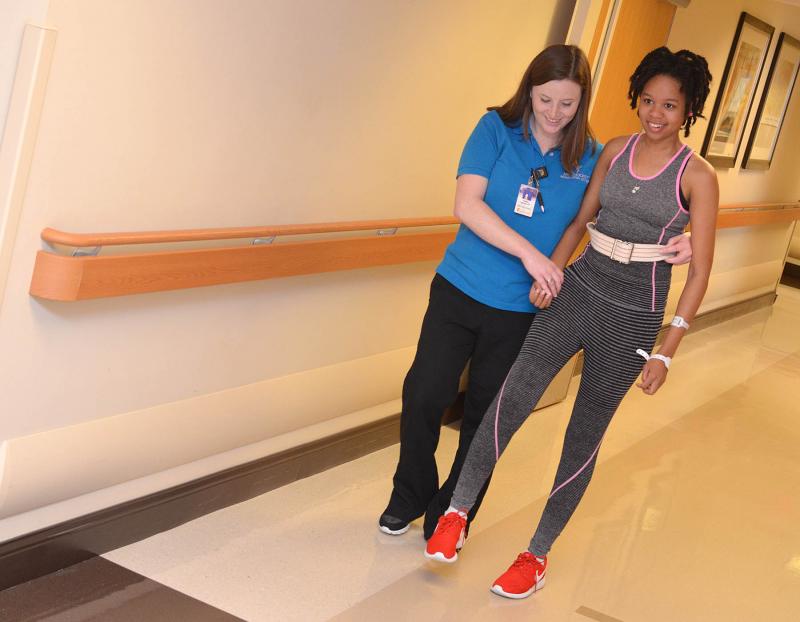 Despite suffering the deadliest type of stroke at age 19, Mar'Shanna Graham began walking the halls of Methodist Rehabilitation Center within a week of starting the Jackson hospital's brain injury recovery program. MRC physical therapist Kaitlin Ingram, at left, said Graham "didn't let anything get her down."

After months of therapy at Methodist Rehabilitation Center in Jackson, Mar’Shanna Graham—aka Mars—has returned to her regular orbit.

She’s back taking classes at Mississippi College in Clinton. And she’s over the moon about her recent acceptance to MC’s nursing program.

“Yay for me,” she says beaming her trademark smile.

Feb. 10 marked a year since Graham’s life took a tragic detour. On that Friday, she was taking the last exam of a six-exam week and looking forward to some free time. But as she answered Question 16 on her Human Anatomy and Physiology test, Graham heard a strange beeping in her head.

“All of a sudden I couldn’t breathe,” she said. “I had no feeling in my right side and almost fell out of my chair. I couldn’t find words—nothing would come out. I couldn’t even raise my hand.”

At age 19, Graham was having a hemorrhagic or bleeding stroke—the deadliest kind.

Less than 20 percent of strokes are hemorrhagic. And Graham’s was caused by a condition that afflicts less than 1 percent of the population—an arteriovenous malformation (AVM).

Typically present at birth, AVMs are a tangle of abnormally connected blood vessels that can weaken over time. While many go unnoticed, there’s no ignoring the impact if they rupture. As blood spills into the brain, tissue damage can lead to severe head pain, weakness on one side of the face or body, seizures, confusion and loss of consciousness.

Graham was rushed to St. Dominic Hospital in Jackson, where staff evaluated her condition and made an urgent call to her mother Ann in Brookhaven. “The doctor said it was a serious emergency and you need to get here as soon as possible,” Ann said.

As a friend drove a frightened Ann to Jackson, MC Dean of Students Jim Turcotte made sure Graham wasn’t alone. “He said he was not going to leave Mar’Shanna’s side until the family got there,” Ann said.

“That’s just the way we do things at Mississippi College,” Turcotte said. “We are very committed to the safety and wellbeing of our students. They should not be in an emergency situation without someone from administration there to lend any help they can.”

Graham remembers little after being admitted into the E.R. “I woke up in the hospital and thought it was a day or so later,” she said. “My mom finally told me I was in the ICU six days. She said the doctor told her he’d have to perform emergency surgery, and there was a 50-50 chance of survival.”

“The doctor said I cannot promise you that your child is going to make it, and my whole world was flipped upside down” said Ann.

During the surgery, Graham’s family kept a prayer vigil in the hospital chapel. And Ann’s head was still bowed when the surgeon came to update everyone several hours later. “The doctor came in and said: ‘Hold your head up, your baby made it,’” Ann said. “And I gave him the biggest hug. He said: ‘I did what I could do, and God guided my hand.’

“She was ready to do anything and that is rare,” said Kaitlin Ingram, an inpatient physical therapist with MRC’s brain injury recovery program. “She didn’t let anything get her down.”

It’s not that Graham didn’t have cause for concern. When she first arrived at MRC, “the whole right side of her body was literally numb,” said her mom.

Nevertheless, she was soon attacking therapy activities like an athlete primed for competition. An example is her performance on MRC’s weight support treadmill system. Used for both therapy and research, the treadmill allows patients to practice standing and walking before they can support their own weight. And it initially takes two therapists to help guide their legs during the process.

“But by the third time on it, it was just me and her,” Ingram said. “She came a long way.”

“Within a week’s time, my baby was taking steps and walking,” marveled her mom. “I said, ‘Lord, you are working out miracles through my baby.’”

A self-professed “geek for fitness” Graham was used to being in top shape. Second in command for her high school ROTC unit, she once did 96 pushups in one minute. And the middle of five sisters used to pester her siblings to help her work out.

So despite her newfound frailties, she resisted any walking aids. “I tried to get her to use a cane one time and she carried it,” remembers Ingram. “I said: ‘Alright, forget the cane.’”

Graham followed her inpatient stay with stints at two of MRC’s specialized outpatient clinics. At Methodist Outpatient Therapy in Flowood, she worked with therapists trained in neurological rehabilitation. Then she transferred to Quest, a one-of-a-kind program at MRC’s Ridgeland clinic that helps stroke, brain and spinal injury patients make a successful return to school, work or family life.

“She was motivated from the beginning to get into nursing school,” said Megan Gautreau, a physical therapist at the Flowood clinic. So speech, occupational and physical therapists at both clinics worked together to ready Graham for a return to the classroom.

“We did a lot of fine-tuning of her gait pattern and mechanics, a lot of treadmill training,” Gautreau said. They also focused on balance and performing dual tasks.

“We’d do physical activities with an added cognitive challenge,” Gautreau said. “For instance, we’d walk outdoors while she was naming objects or doing serial counting.”

“Writing was a problem, too,” Boyd said. “So we worked on strategies for taking notes, such as recording lectures.”

Normally right-handed, Graham learned to be a leftie. But she continues to push to regain more abilities on her right side.

“With her return to nursing in mind, we had to work on integrating both hands to incorporate her school and job performance,” said Pat Baird, an occupational therapist at the Flowood clinic. “She had right-sided increased muscle tone, which impaired the use of her wrist and fingers.”

Initially, Graham also suffered from double vision and her visual attention and motor coordination remained a concern. That problem called for sessions on the clinic’s Bioness Integrated Therapy System (BITS), the only device of its kind in the metro Jackson area.

Working with a large interactive, touch screen, Graham did activities to enhance her eye-hand coordination, peripheral vision and memory and increase visual search and scanning abilities.

It wasn’t the only time Graham found herself immersed in therapy that resembled a video game.

At Methodist Outpatient Therapy in Ridgeland, she exercised on a specialized treadmill with virtual reality features. During a recent therapy session, she did a programmed treadmill workout while she watched a mirrored version of herself on the machine’s video screen.

“The treadmill gives her good visual and auditory feedback,” explained Erin Perry, a physical therapist at the clinic. “For instance, we can set parameters to the step length we want. And she might look up and see she has to take a longer step on the right.”

Another technology helping Graham improve her walking ability is the Bioness L300. The wearable device uses low level electrical stimulation to help activate weakened nerves that control muscles in the lower leg. And Graham likes the effect. “I walk a whole lot smoother when I have it on,” said Graham.

“It gave her a pretty normal gait, and we’re hoping she can get her own unit,” Perry said. “It would help her on campus for long distances.”

Graham’s transfer to Quest put even more emphasis on the skills she would need for nursing school, and her therapists have been brainstorming ways to smooth that transition. “We try to incorporate things she would be doing in nursing school, like patient transport and lots of standing,” Perry said.

“She has abnormal muscle tone which affects her ability to move her arm fluidly,” explained Kari Richeson, an occupational therapist at Quest. “She has a lot of difficulty with dexterous movements and the field of nursing requires a lot of dexterity.”

Another problem for Graham has been impaired proprioception. MRC occupational therapist Allison Harris said the term describes a loss of sensation that limits Graham’s ability to recognize the position of her arm. “It makes it much harder to coordinate movement,” Harris said. “You have to look at your arm and focus on that.”

But as Graham has already demonstrated, nothing is so difficult she can’t overcome it. Her mindset from day one was: “I’ve got to fight.”

One answered prayer was MC’s willingness to work with Graham on her return to the campus. “Dr. Eric Pratt, vice president of Christian development, and Dr. Ron Howard, vice president of academic affairs, were there for the long-haul to make sure she assimilated as best she could,” Turcotte said.

Today, Graham is managing 15 hours of classes, a part-time job in the MC library and a return to the gym. And when she heads to the nursing school this fall, she’s convinced the experiences of the last year will be a benefit.

For one, she’s already decided she wants to be a nurse practitioner who specializes in neurological conditions. And she knows she’ll be a more empathetic caregiver.

“I think it’s going to be an amazing impact because I can relate to my patients,” Graham said. “I can tell them you are going to be OK. I’ve been through the storm, and God creates the most beautiful creations in the storm.”