‘Nothing but smiles’: Nauvoo, Methodist Rehab’s new facility dog, assists in therapy and lightens mood at the Jackson hospital 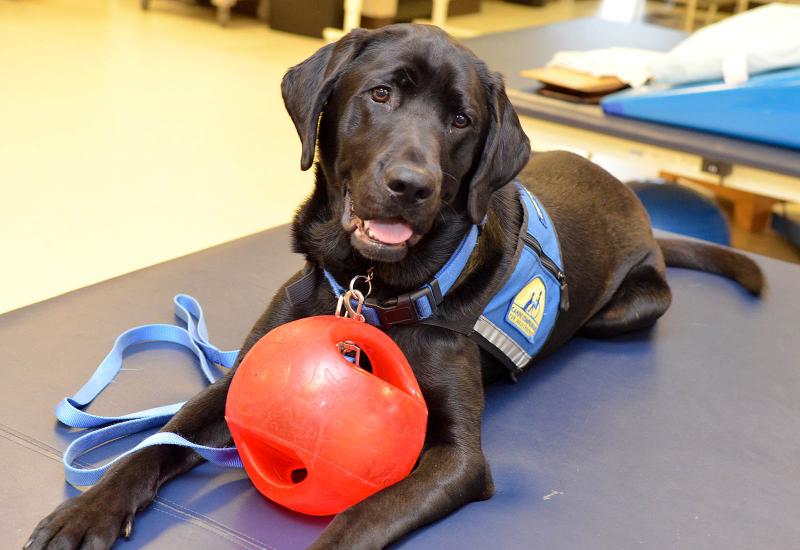 Nauvoo is Methodist Rehabilitation Center’s newest facility dog. He was trained by Canine Companions for Independence (CCI), who for over 40 years have been training dogs to enhance the lives of people with disabilities. 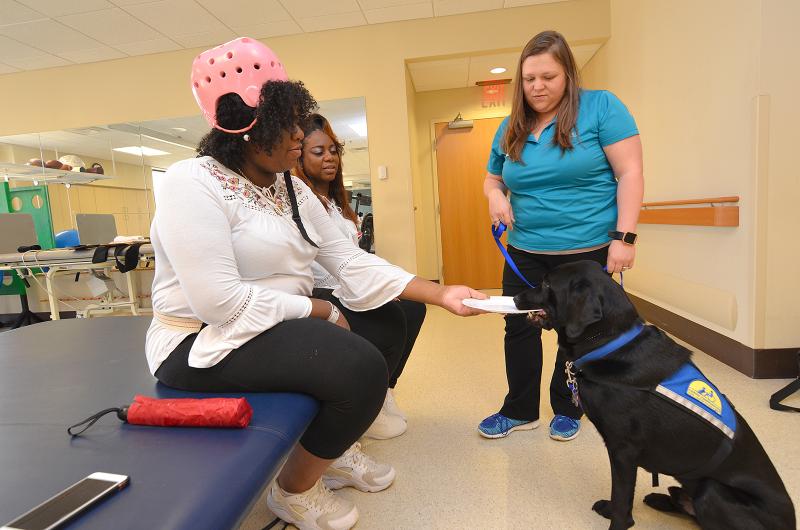 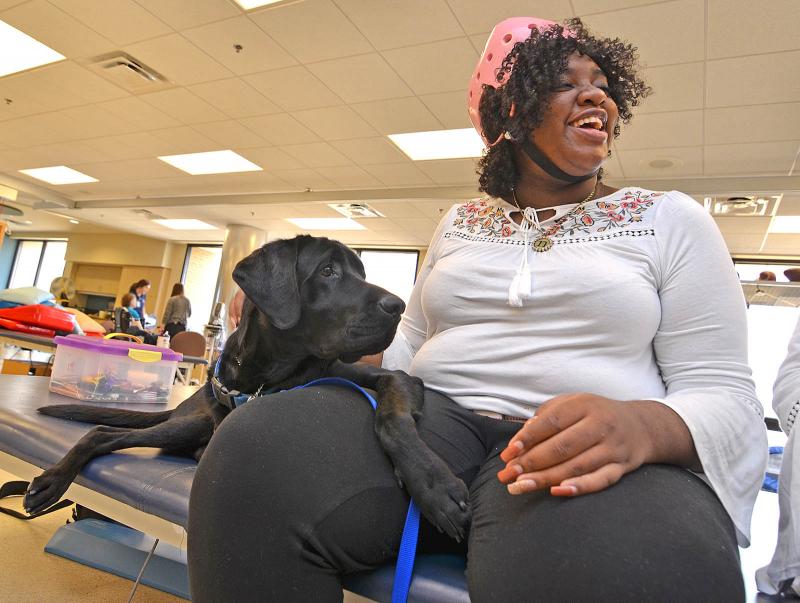 Only one employee at Methodist Rehabilitation Center is allowed to nap on the job.

But he’s also the only employee with four paws and a tail.

He’s Nauvoo, the Jackson rehabilitation hospital’s new facility dog. And he’s no ordinary pooch. The black Labrador and golden retriever mix was trained by Canine Companions for Independence (CCI), who for over 40 years have been training dogs to enhance the lives of people with disabilities. Nauvoo knows over 40 commands designed to assist and inspire MRC’s patients.

“I always ask patients during our initial evaluation if they like dogs,” said occupational therapist Misty Ferguson, who is Nauvoo’s handler. “And most of the time they say, ‘Why are they asking me this in the hospital?’”

When Ferguson asked acquired brain injury survivor Tahkizalyn “Nunu” Jenkins of Webb and found out that she had her own dog at home, she knew activities using Nauvoo would keep her engaged.

“She’s able to use Nauvoo for motivation and encouragement,” Ferguson said. “When it’s just her and him, it takes away the pressure of human involvement.”

During therapy, Jenkins brushed Nauvoo’s hair, threw a ball for him to fetch and even named common household items that Nauvoo picked up and handed to her.

“On her first day, we introduced Nunu and Nauvoo,” Ferguson said. “There was an instant connection between them and she smiled immediately. That first morning here she was very tearful in the room and having a hard time getting started with things. But then we introduced them and it was nothing but smiles.”

“I was scared of him at first, because he’s so big!” said Jenkins, whose dog at home is a small Shih Tzu. “But now I just love him. I want to come home with him and Misty.”

Jenkins hopes to get her own assistance dog to help her continue therapy after leaving the hospital, and to aid with certain activities. CCI dogs also respond to commands to retrieve all kinds of items, open automatic doors, push drawers closed and much more.

“We’re in the process now,” said her mother, Gladys Jenkins. “Just seeing how she works with Nauvoo made me want to try. She was having trouble with her arm, and Nauvoo could sense it and help her. I was like, ‘wow.’ And I see that he has helped her with finding her words. If he’s around she communicates much more.”

In fact, facility dogs have been proven to be useful in speech therapy.  Speech therapist Nikki Howell often asks Ferguson for Nauvoo to assist her patients.

“So far I’ve used Nauvoo for some high level language tasks,” Howell said. “A lot of times, people who have language issues have trouble with directional terms like right, left, up, down.  So we have them throw a ball and then say which direction Nauvoo went to fetch it. When patients with cognitive impairments have trouble with recall, what we’ve done is have Nauvoo do a series of tricks. Then the patient has to remember what he did and say it aloud.”

Beyond the practical applications in therapy, having a facility dog like Nauvoo helps to lighten the mood in the hospital, where sometimes emotions can run high.

“Most of the patients really enjoy having him around,” Ferguson said. “Even the ones that might be a little apprehensive at first come around. Everyone’s always asking me, ‘Where’s Nauvoo?’ even if I haven’t used him in our therapy sessions. He’s good for the rest of the staff too. He just lights up the whole room. Just him being around makes everybody happy.”

According to CCI, it costs about $50,000 to train and provide follow-up support for a facility dog. However, they provide the dogs at no cost thanks to the support of donors and volunteers. Nauvoo was provided to MRC via a $300,000 grant from PetSmart Charities, the philanthropic arm of the pet retail giant.

MRC has had facility dogs in the past. Puma, the hospital’s last facility dog, turned 10 in January 2017 and handler and occupational therapist Jenn Sivak decided it was time for him to retire. That’s when Ferguson expressed her interest to MRC’s therapy director and began the process of becoming the handler for MRC’s next facility dog.

“I sent in a request for information to CCI, and then they sent me a paper application,” Ferguson said. “After several weeks, there was a phone interview. The next day I found out that they wanted me to fly to CCI’s training center in Orlando, Fla., for an in-person interview. There, we practiced with an imitation dog made out of carpet, so they could see my handling style to see what kind of dog I would fit best with.”

About four months later, Ferguson got a call. She had been chosen to receive a dog and they wanted her to return to Orlando for an intensive two-week training session.

“The classes were all day long, with lectures and dog handling training,” Ferguson said. “They had us walk with different dogs to see how we interacted. I only went on one walk with Nauvoo, and it was the afternoon before we were to be paired with a dog, so that we could start working with them. All night I was thinking it had to be him, the walk just felt right. The next day they told me we had been paired. I later found out that Nauvoo and I share the same birthday, Sept. 27. So maybe it was meant to be.”