Published on May 2, 2018
Susan Christensen 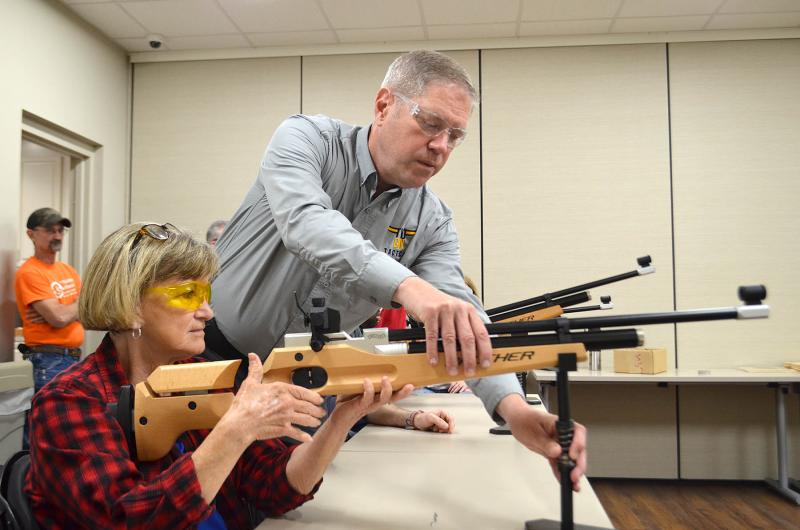 John White, co-owner of Two-Gun Tactical in Flowood, helps adjust a gun mount for Sheila Burnham of Madison during a marksmanship clinic organized by Methodist Rehabilitation Center in Jackson. 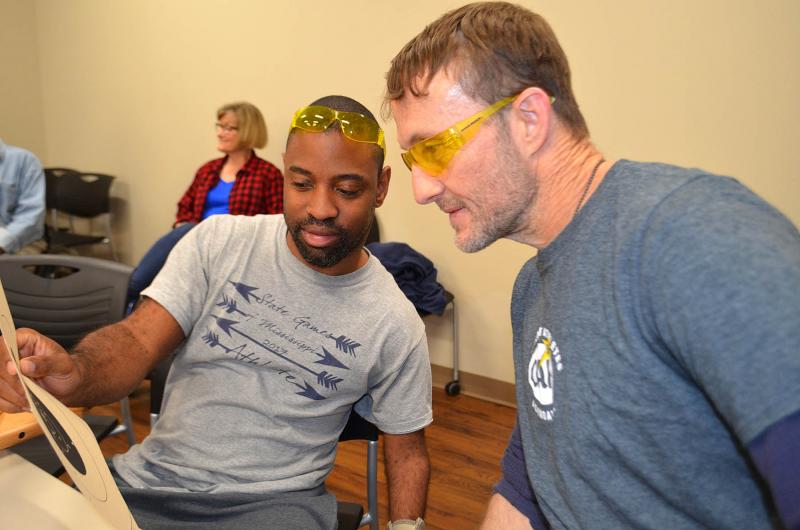 DeJuan Surrell of Jackson, left, and Joey Brinson of Florence, right, look at how close Surrell got to the bullseye during target practice at Two Gun Tactical in Flowood. Both participated in a marksmanship clinic organized by Ginny Boydston, director of the adaptive sports and recreation program at Methodist Rehabilitation Center in Jackson. 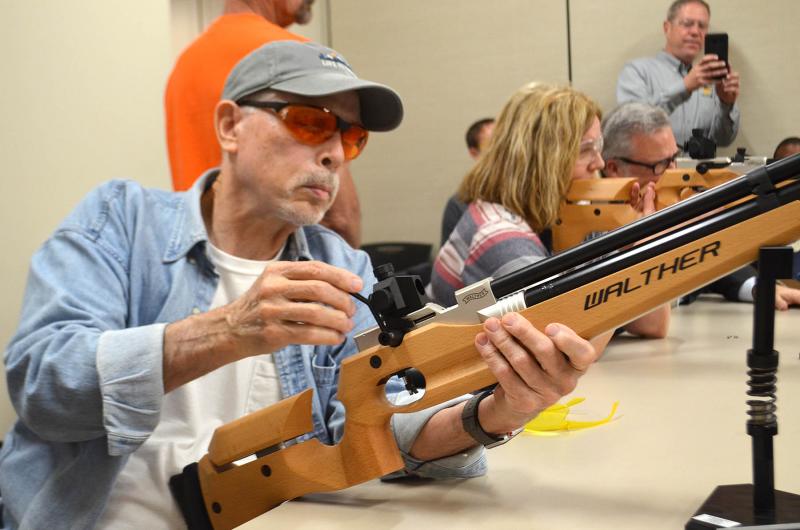 From the seat of her wheelchair, Sheila Burnham of Madison has hunted everything from Mississippi deer to African Cape Buffalo.

But on a recent Thursday morning, her prey was a paper target. She was among the participants in a Shooting Para Sport Clinic at Two Gun Tactical in Flowood.

The April 12 clinic was the first of three organized by Ginny Boydston, director of the adaptive sports and recreation program at Methodist Rehabilitation Center in Jackson. Marksmanship clinics also have been scheduled for Gulfport on May 10 and Tupelo on May 17.

During her more than 40-year tenure at MRC, Boydston has introduced Mississippians with disabilities to everything from snow skiing and sled hockey to wheelchair racing and fencing. And she has long wanted to add marksmanship to the mix.

“It’s one of those Paralympic sports that has been out there, and I knew we probably had interest,” she said. “Mississippi boys and girls are born to shoot.”

“I’ve been around guns all my life,” said John Berret of Madison, one of five people to attend the first clinic. “I got my first BB gun from my papaw at 8 years old.”

“I’ve been shooting since before I can even remember it,” added Joey Brinson of Florence.

Burnham waited until adulthood to take up shooting, but she caught on quickly once she began attending events for disabled hunters. In 2004, she became the first woman to win the Safari Club International Pathfinder Award.

The honor came with an African safari, so Burnham is no stranger to bagging big game. But that skill didn’t immediately translate to hitting bullseyes on a tiny target 10 meters away. “The sight takes a little getting used to because you have to put a sight within another sight,” she said.

“There is a lot more to it than you would initially think,” agreed Berret. “But it’s a lot of fun.”

Boydston began working on funding for a marksmanship program last year. And she said it felt like “divine intervention” when everything fell into place.

The Mississippi Department of Rehabilitation Services approved a $12,500 grant for the program through its Traumatic Brain Injury/Spinal Cord Injury Trust Fund. And Life of Mississippi and the VA Medical Center in Biloxi also are sponsors.

Once she had the money to purchase equipment, Boydston went searching for clinic sites. And she was again met with generous offers. Two Gun Tactical, the Marine Corps JROTC at Gulfport High School and Grace Baptist Church in Tupelo volunteered to host clinics and also signed on as sponsors. And Two Gun Tactical co-owner John White agreed to teach clinic participants.

“Ginny had the equipment, we had the place and we were glad to help,” said White, an Air National Guard retiree who has spent the last six years teaching Boy Scouts to shoot. “We pride ourselves on being an education center for all types of shooting.”

White said he particularly enjoys educating newbies. And he found an enthusiastic student in Michelle Cox of Edwards. “I do want to be able to shoot a gun and learn so I can get out in the woods,” she said.

Due to her quadriplegia, Cox has limited use of her hands. So her machinist husband, Michael, made a metal device to help her pull the trigger. But as it turned out, her fingers were all she needed.

“I like I can pull the trigger by myself,” Cox said. “It makes you feel free.”

An “extremely sensitive” trigger is one characteristic of the competition rifles, White said. And there’s nothing flimsy about them either. “This thing weighs more than me,” said DeJuan Surrell of Jackson as he dealt with the heft of the mostly wooden rifle.

As manager for the U.S. Wheelchair Fencing Team, Boydston has contacts at the Olympic Training Center in Colorado Springs, Colo. And she said Bob Foth, resident rifle coach and program manager of USA Shooting, was a great resource.

His recommendation for the best competition air rifles and pistols definitely impressed clinic participants. “These are definitely not the run-of-the-mill BB guns we had as kids,” Brinson said.

“They are high-end firearms,” White said. “We got to play with the guns yesterday, and they are real nice. I had to run my guys from out of here.”

Using MRC’s equipment, White set up a small shooting range in a Two Gun Tactical classroom. Participants sat behind a table equipped with gun mounts as they fired at targets displayed at the correct competition distance. But not before White stressed some safety rules and explained the rifle’s capabilities.

Not a hunter herself, Boydston said she appreciated White’s expertise.

“Marksmanship is a precision sport, and like any sport, you need a coach,” she said. “John gave us the info we needed to keep us safe and let us learn the rifle and have a good experience with it. Today was very successful because most people were hitting the target.”

For those who want to compete in marksmanship, Boydston said opportunities abound.

“It’s more well-known in America, and there is more opportunity to experience a tournament,” Boydston said. “The thing I think I’m going to really like about it is people can do this on their own. They don’t need a buddy to spar with or a team. They can get their own gun and go to a range to shoot. It’s a little more user-friendly.”

And like most sports MRC has brought to Mississippi, it can be a game-changer for the newly injured, said Berret, who is on his fourth MRC-sponsored athletic activity.

“It helps them get back their self-confidence, which they tend to lose after an injury,” Berret said. “It gets them out into the community and that can be hard, at first. It helps you mainstream more quickly. My first time in rehab, I remember seeing people in wheelchairs doing things. And I thought, if they can do that, I can do that, too.”

A free Shooting Para Sport Clinic is scheduled for 1:30 to 4:30 p.m. May 10 at the Marine Corps JROTC building at Gulfport High School, 100 Perry St. in Gulfport, and at 2 p.m. May 17 at Grace Memorial Baptist Church, 3035 Highway 178 East in Tupelo. The clinic is open to athletes age 13 and up with physical impairments and registration is required. Call Ginny Boydston at 601-364-3566 for more info.