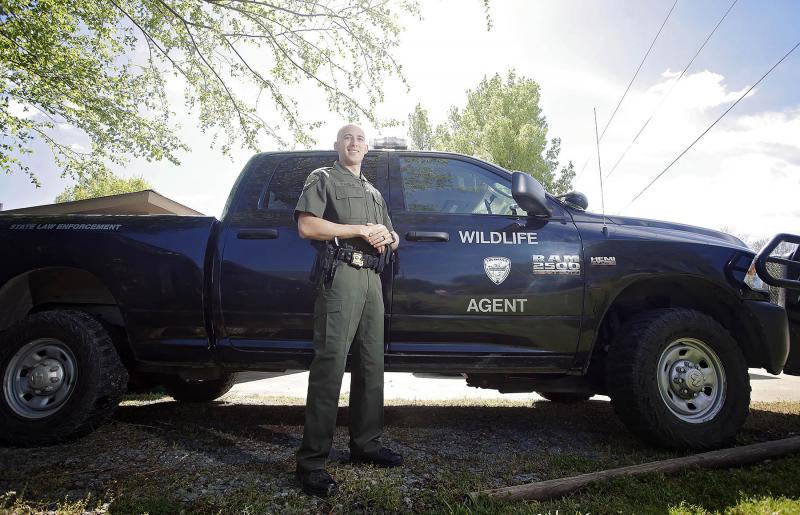 Seven months after being shot four times in the line of duty, Tyler Wheeler of Monroe returned to his beloved post as a Louisiana Wildlife and Fisheries senior agent. Doctors call his recovery from a gunshot wound to the head “amazing.” / Photo by Melanie Thortis 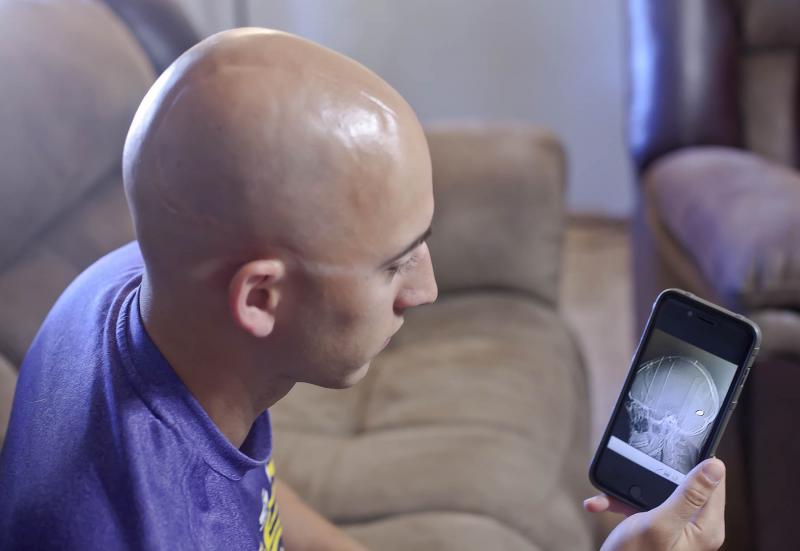 Tyler Wheeler bears few traces of his brush with death. But he has proof of the trauma on his cell phone. A copy of his post-injury CT scan shows a bullet fragment that’s still in his brain. / Photo by Melanie Thortis 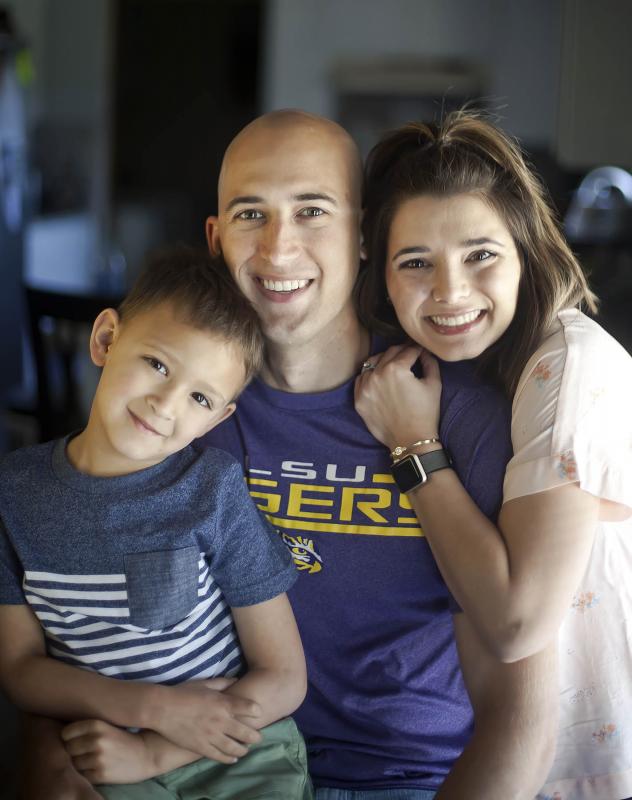 Tyler Wheeler now cherishes the time he spends with wife, Haley, and son, Landon. “I’m the kind of guy who didn’t like to take leave,” he said. “But I’ve learned you need to spend time with your family—any one of them might not be here forever.” / Photo by Melanie Thortis 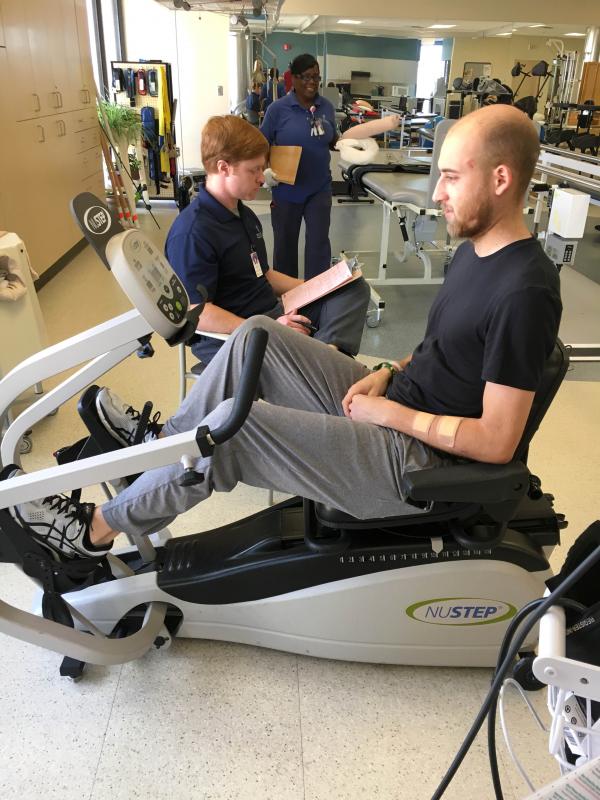 Tyler Wheeler said physical therapist Alex Touchstone, left, was among the staff that kept him motivated while he worked to recover at Methodist Rehabilitation Center in Jackson, Miss. “The staff seemed like that’s the place they wanted to be and that’s where they wanted to work the rest of their lives. They made the rehab experience as fun as it could be.” / Photo by Melanie Thortis

After 25 years of helping people overcome brain injuries, Dr. Stuart Yablon often fears the worst for victims of penetrating gunshots to the head.

“It’s a high mortality group,” said the physical medicine and rehabilitation physician at Methodist Rehabilitation Center in Jackson, Miss. “A lot of patients die before they get to the hospital, and those that do make it tend not to do well.”

“We were gratified to see how well he progressed, and it was a privilege to take care of an officer injured in the line of duty,” he said. “They put their lives on the line for us every day.”

Today, Wheeler bears few traces of his brush with death. Even with his head shaved bare, he’s curiously devoid of obvious scars. But he has proof of the trauma on his cell phone. A copy of his post-injury CT scan shows why he’s lucky to be alive.

“The bullet entered the left side, went through the back of both frontal lobes, hit the right side of my skull, then went to the back of my brain where it still sits today,” Wheeler said.

In the past, neurosurgeons removed such bullet fragments. “But in modern times, they don’t go after it unless leaving the fragment poses greater risk to some important structures,” Dr. Yablon said.

Research shows a number of factors influence gunshot related brain injuries. There’s bullet velocity, the distance from which the gun was fired and whether the bullet is designed to fragment on impact.

Wheeler’s assailant used hollow point bullets, which are meant to break apart. The fact they didn’t was the first of several fortunate twists that helped save his life.

Thanks to his shift partner’s quick arrival after the shooting, Wheeler got prompt emergency medical attention at LSU-Shreveport Medical Center. And he also benefitted from his family’s decision to seek the expertise of Methodist Rehab’s seasoned brain injury rehabilitation team.

“It would be tough to beat MRC—they were outstanding,” said his wife, Haley. “If I had to recommend a rehab facility for someone to go to, that would be it.”

“The reason I got out of there so fast is not just because of my will,” said Wheeler, who returned to his Monroe home a mere 10 days after arriving at MRC. “The atmosphere is so good … it makes the patients want to get better.

“The staff seemed like that’s the place they wanted to be and that’s where they wanted to work the rest of their lives. They made the rehab experience as fun as it could be.”

“She left me there to die”

Wheeler has always been a fan of “keeping my family safe and the next person safe.” As such, he had his sights set on a career with the state police. But an opportunity to become a wildlife officer at age 21 seemed too good to pass up.

“You get to deal on a daily basis with people who are out having fun, and I enjoy that aspect,” he said. “I like making sure everyone is able to enjoy the same stuff I did when I was growing up—hunting and fishing with my grandfather and my dad.

“Keeping bad guys off the street is good, too.”

That mindset meant Wheeler was not one to ignore an erratic driver, even at the end of his shift. So around 2 a.m., he pulled over Amethyst Baird Rathore. And as he prepared to administer a field sobriety test, she nearly killed him.

As he tried to un-holster his gun and scramble to safety, Wheeler blacked out and hit the ground.

“As I began to wake up, I heard her walking toward me, and I felt her presence standing over the top of me,” he said. “At this time, she fired one more round into my upper back, more precisely on my upper spine and in between my shoulder blades. My bullet resistant vest stopped this bullet. She then left me there to die.

“I was laying on my stomach in the dirt, bleeding from seven different locations on my body.”

Soon, a helicopter transported Wheeler to LSU-Shreveport Medical, while his wife was driven to the hospital by one of his coworkers.

“Let me tell you, we got there 10 minutes after he touched down,” Haley said. “J.P. had called me at 3 a.m. and told me Tyler got shot in the arm. I’m like OK, I can deal with an arm. Then we got to the hospital and it totally changed. They said he got shot in the head, and he got shot in the shoulder. I was the only one who got to see him before he went to surgery, and he still had his uniform on. It was not a good sight for me.”

“He wanted to be challenged”

Today, Wheeler walks with the confident posture of a man proud to wear a law enforcement uniform.

But when he rolled into MRC on Jan. 26, 2017, he could barely stand. He’d already endured three different surgeries, including a craniotomy. That’s when a neurosurgeon removes part of your skull to give your bruised brain room to swell.

Doctors also replaced his shattered left jawbone with a titanium plate and removed a bullet that had passed within millimeters of his jugular vein. He got a feeding tube, too, which Wheeler admits he railed against. “I’d say: ‘Give me a burger, I know I can eat it.”

Heaven knows, he needed the calories.

“When they brought me to Jackson, they weighed me. And I realized real quickly how bad things were,” Wheeler said. “I had lost 31 pounds, and I didn’t have 31 pounds to lose. It hurt me because I had been in really good shape at the time. I had worked hard to get there and all of it was gone.”

What remained was a stubborn work ethic that kept Wheeler poised to put everything into his recovery.

“He was extremely motivated to get back to work,” said Alex Touchstone, his physical therapist while at MRC. “He wanted to be challenged. And with a patient like that, you can make treatment fun.”

Because Wheeler had an athletic background, Touchstone and occupational therapist Chuck Crenshaw worked together to offer therapeutic exercises reminiscent of sports training.

“Working on a lot of high-level balance was a primary issue,” Crenshaw said. “So we’d pass the soccer ball back and forth. And by the end we were working on planks for his core strength.”

Wheeler did sessions on the hospital’s Dynavision visual and neuro-motor training device, too. Patients are timed as they touch flashing targets on the device’s light board, and Wheeler excelled at that, as well.

He also attended speech therapy to work on cognitive issues. “I hated it, but it helped,” he said. “I did have some memory issues.”

But he hadn’t forgotten about the night he was shot, which Crenshaw called unique. “Most people with brain injuries don’t recall anything that happened. But he could walk you through everything,” Crenshaw said.

Clea Evans, Ph.D., director of neuropsychology at MRC, said revisiting such scenarios can be troubling. That’s why helping victims of violence address their trauma is part of therapy at MRC.

“Emotional wounds are invisible, but can also impact the course of recovery,” she said. “So therapy involves helping them tell their story and begin to process it on a cognitive and emotional level. Our goal is to help them begin to regain a sense of safety and security, be able to trust others again and learn new coping skills to manage the inevitable anxiety that comes with cues or triggers that remind them of the traumatic event.”

Both Yablon and Evans say the most successful brain injury patients are those who are blessed with the best support. And Wheeler definitely had a crew of family, friends and coworkers cheering him on.

“The first day they brought him to his room, there were like five to eight law enforcement officers in the hall,” Touchstone said. “That kind of made me excited. I wanted to work with that guy.”

“My life is back to normal”

On March 27, 2017, Wheeler had his fourth and most welcome surgery—a procedure to replace the part of his skull that had been removed. Doctors also took out the feeding tube and a bullet fragment near his left trapezoid.

Just over a month later, Wheeler passed a test of his driving skills at Methodist Outpatient Therapy in Flowood, Miss. And on Aug. 2, he wrapped up what had been six months of intense outpatient rehabilitation at a clinic close to home.

Wheeler eased back into full-time agent duties on Aug. 4, and the transition went smoothly.

“Everything fell back into place,” he said. “And my life is back to normal. However, what my family has seen and had to endure will never go away.

“My wife didn’t get the notification until after the initial surgery that I would live. And my 5-year-old son, Landon, had to see his dad in a hospital bed with half his head. He knows that a bad lady tried to kill me.”

That “bad lady,” by the way, was sentenced to 60 years for attempted murder.

Today, Wheeler believes God spared him for a “very important reason.” And he said the experience taught him some important lessons. “I’ve learned to handle situations a little more safely on the job.”

And he’s also come to understand that everything shouldn’t always be about the job.

“I’m the kind of guy who didn’t like to take leave. But I’ve learned you need to spend time with your family—any one of them might not be here forever.”