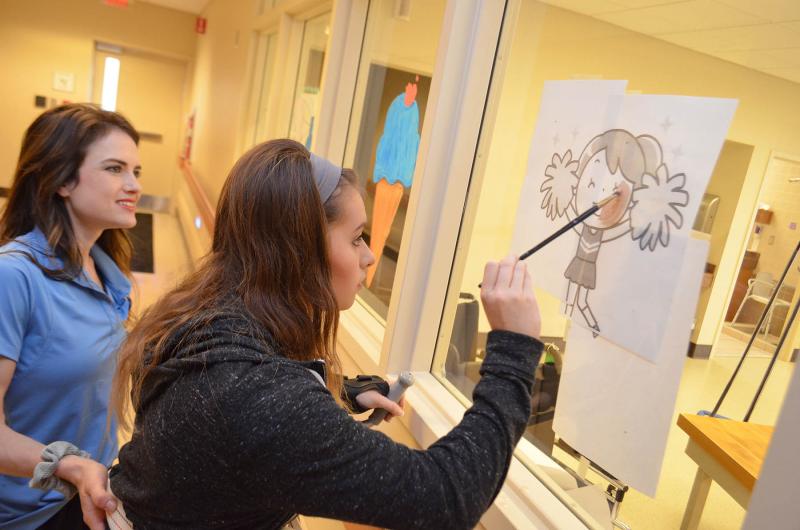 During a session with occupational therapist Anna Leigh Whitney, left. Anna Lauren Green paints a cheerleader on the window of the sixth floor therapy gym at Methodist Rehabilitation Center in Jackson. 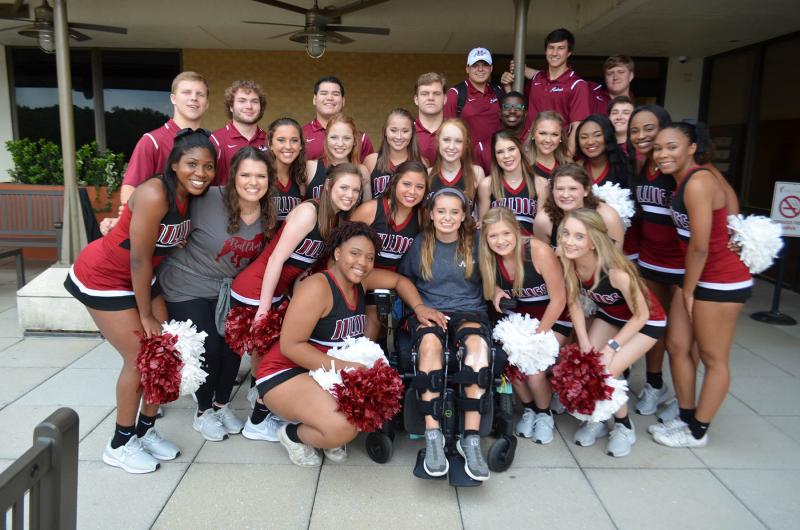 Anna Lauren Green wants to eventually become a cheerleader at Holmes Community College, so she was all smiles when the current squad came to visit her at Methodist Rehabilitation Center. 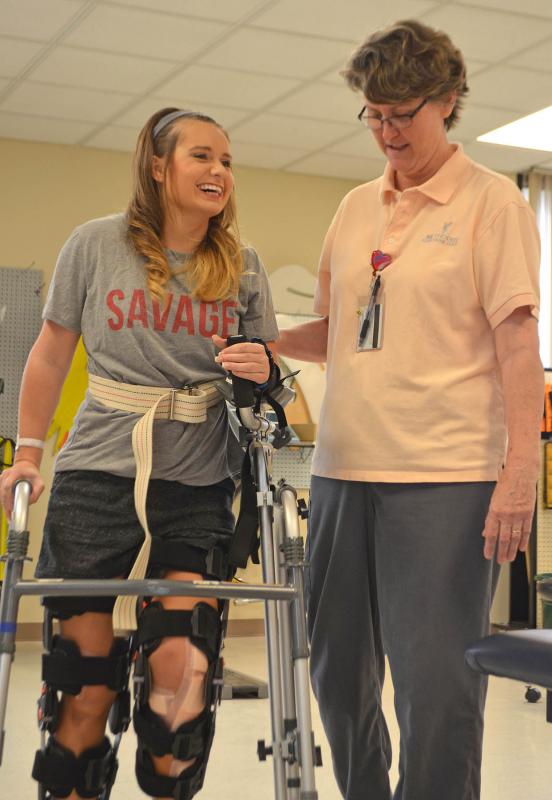 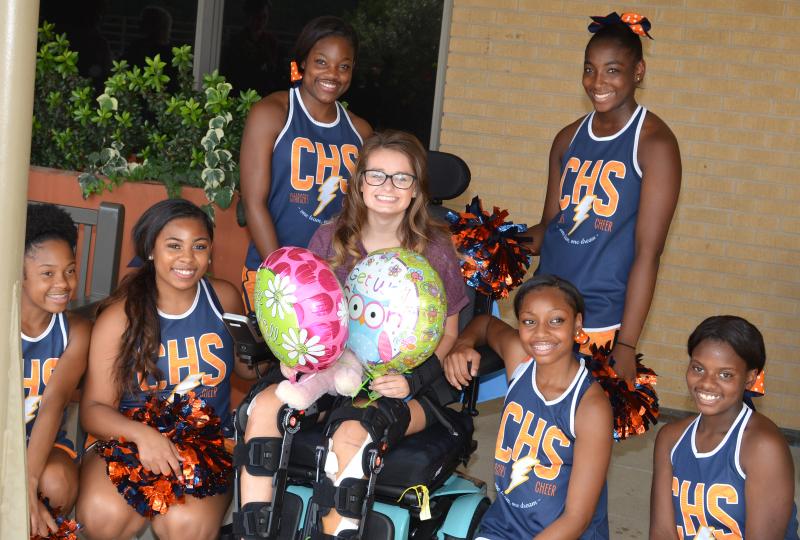 In the world of cheerleading, you’ve got to be able to “stand up and holler.”

So Anna Lauren Green has every reason to feel frustrated.

The Benton Academy cheerleader can holler, alright, but standing up is still a work in progress. Since an Aug. 18 car crash, she’s been nursing two broken legs and a fractured left wrist.

But she’s feeling more confident about her recovery after finishing a week and a half of inpatient therapy at Methodist Rehabilitation Center in Jackson.

“After the first day at MRC, I knew I was going to get stronger,” she said. “They let me do therapy at my own pace as long as I did it. Everybody is so nice.”

While she appreciates the compliment, MRC physical therapist Mary Smith says she didn’t go easy on Anna Lauren to win her favor. It was more the nature of her injury that kept Smith from pushing too hard.

“With orthopedic injuries, you do everything you can not to hurt the surgery or the fractures,” Smith said. “When she’s able to do weight-bearing exercises, there will be a lot more to it. Now, we’re working on getting her as independent as she can be—to stand and be able to walk enough distance to get into the bathroom.”

By the time she left MRC, Green could manage 80 feet with the help of a walker. And it was clear why she was working so hard.

Green has no intention of hanging up her pompoms. She’s been wearing the uniform of the perpetually perky since the 7th grade.

This year, she had hoped to take things to a higher level. The 17-year-old was working on becoming a flyer—those brave spirits that occupy the peak of every pyramid and do their best to defy gravity as they’re tossed in the air.

It was to be a step toward her ultimate goal of making the Holmes Community College squad and becoming a coach for the American Cheerleading Association. But her dreams were put on hold by a terrifying tumble inside an out-of-control car.

It was raining the night of her wreck, and Green suspects she hydroplaned. When her 2007 Toyota Camry quit flipping, it landed out of sight in a concrete box culvert.

Unable to climb out on her own, Green couldn’t do anything but scream for help. Her cell phone had no service, and it would be hours before her frantic family discovered her car.

Kelly Mason said her daughter didn’t often drive by herself. But in an attempt to “practice this letting go thing,” Mason had allowed Green to go alone to meet her boyfriend’s parents in Lexington.

“Now, I’m done practicing,” her mother says ruefully.  “I gave it one try.”

Mason said her mother’s intuition told her “something was not right” when Anna Lauren missed her 11:45 p.m. curfew.

“Our fear was she had had a flat tire, run out of gas or taken a wrong turn and was going down back roads,” Mason said. But a search of her route offered no sign of Green.

Mason sounded the alarm and soon people were combing the roads between Benton and Lexington looking for her car. It would be after 2 a.m. before her boyfriend’s father noticed some gravel on the road, rolled down his window and heard her cries.

“He went down to her and let her know he was there and would have to go up the road for help,” Mason said.

As a sheriff’s car sped to the scene, Steven Green pulled behind it and followed the blue lights to the scene of his daughter’s accident. As he scrambled to her side, he was thankful he’d spent 19 years in the fire service. The sight of his child suffering was hard to take.

“If I hadn’t had that training, I don’t know what I would have done,” he said. “It was a terrible experience, nothing anyone wants to go through.

“I broke down at one point when we got to the ambulance. A fellow I knew from the fire service said: ‘You’ve got to get hold of yourself.’”

It was advice he shared with Mason, as well. “She was hysterical,” he said. “I told her the only way I’ll let you ride in the ambulance is if you calm down.”

Green can’t remember much about what happened after she wrecked. But she does recall waking up about 1 a.m. clutching a card containing a Bible verse to her chest.

On one side was a painting of angels. On the other was Romans 12:12: “Rejoice in hope, be patient in tribulation, be constant in prayer.”

“The good Lord did that,” said her grandfather David Green of West.

Green was often surrounded by family and friends while at MRC, and she said that’s one reason her family chose the facility for her recovery.

“I like how they were welcoming to my family—some places you couldn’t have family there,” Green said.

“This is where you want to be is what everybody told us,” said Green’s sister, Katie Mason. “We heard nothing but good things,” added her mom.

Nevertheless, Green admits to being nervous about therapy as she transferred to MRC. “Just sitting on the side of the bed took the breath out of me,” she said. So she was concerned about facing the demands of three hours of therapy each day.

But MRC occupational therapist Anna Leigh Whitney said Green had no problem pushing herself. “You could tell she was very motivated by her desire to get better,” Whitney said.

Whitney said the two worked on “the simple everyday things people take for granted.” Mostly they problem-solved how she would take showers, get dressed and use public restrooms once she returned to school.

“We concentrated on her upper body strength and endurance to compensate for her limited mobility because of her lower extremity injuries,” Whitney said.

Green’s love of cheerleading was obvious, so hospital staff worked it into her therapy sessions. To practice balance activities, Whitney had Green stand while painting a cheerleader on a window in the therapy gym.

At the behest of MRC rehab tech Erica Jones, cheerleaders from Callaway High School came to visit. “My daughter has been a cheerleader since she was little,” Jones explained. So she knew what it would mean to Green.  “Cheering is where her heart is, and if I can make a patient smile that’s what I do,” Jones said.

The Holmes Community College cheerleaders also dropped by MRC on their way to a game, and Green was all smiles as they chanted Two Bits in her honor.

“I told the cheer coach that I’ll be flipping by you soon,” Green said. “And she said: ‘Be ready by March, that’s tryout month.”

Her mom said she has no doubt she’ll meet the deadline. “Any goal that she sets, she’s going to beat it. As her mom, one of my favorite things about her is her drive. In school, she sets a goal and achieves it. That’s an attitude she’s going to have in rehab.”