‘Without oxygen for four and a half minutes’: Therapy at Methodist Rehab helps Byram police officer return to the force after suffering a brain injury from oxygen deprivation 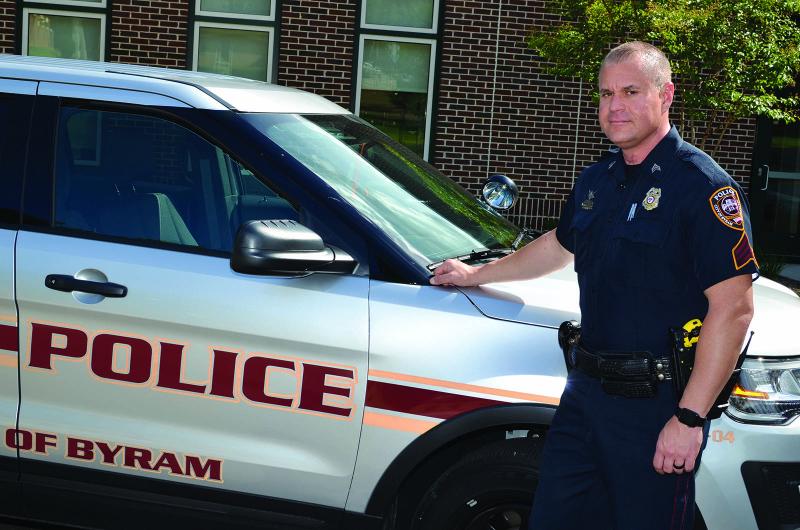 Scott Lawrence has returned to his job as training officer in charge with the Byram Police after a brain injury with the help of therapy at MRC. 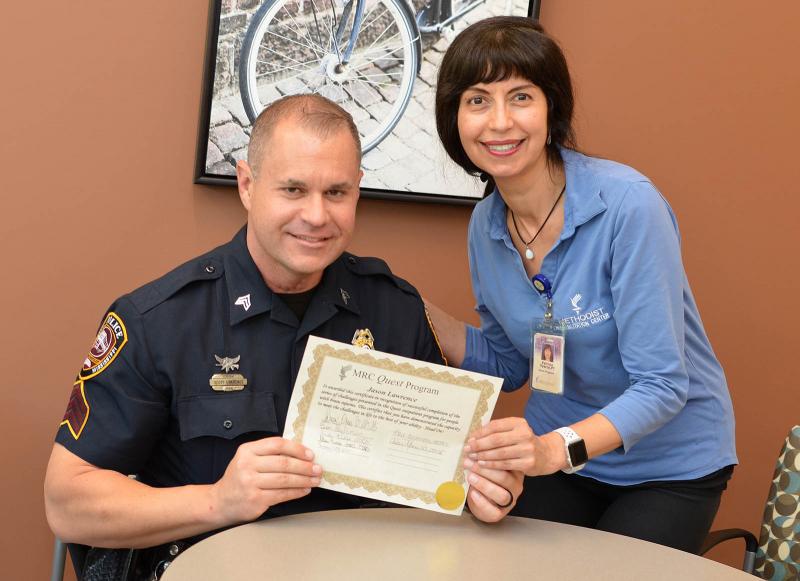 Scott Lawrence, at left, displays his certificate of graduation from MRC’s Quest program, with Methodist Outpatient Therapy physical therapist Patricia Oyarce at his side.

“In August of 2016, I was involved in a police pursuit that ended in a crash and a fight with an armed robbery suspect,” he said. “During the fight, my neck got injured.”

But it would be a brain injury that put Lawrence in inpatient therapy at Methodist Rehabilitation Center, beginning a year-long road to recovery.

It happened after Lawrence elected for surgery to fix a herniated disc in his neck.

“The next morning, I woke up and my neck was extremely swollen,” Lawrence said. “I was having a hard time breathing and swallowing. My wife got nervous and called an ambulance.”

In the emergency room, doctors tried every way they knew to open up his blocked airway.

“The doctors estimated that I had gone without oxygen for four and a half minutes,” Lawrence said.

Though he was finally stabilized, the damage had been done: Lawrence suffered an brain injury from lack of oxygen during the ordeal.

He then spent three weeks in the ICU in a coma. When he awoke, doctors found he had also developed myoclonus, a neurologic condition that causes involuntary twitching or jerking. And he had lost all memory of the past year.

“I was also unable to walk and had little function of my hand movements, as well as severe vertigo,” Lawrence said. “At that point, I was basically told I was never going to be able to come back to work as a police officer.”

It was then Lawrence transferred to MRC for inpatient therapy.

“There, I received some of the best one-on-one physical therapy that I have ever received in my life,” Lawrence said. “They continued to keep my body moving and to keep me motivated.”

Thanks to his recovery during his stay at MRC, going back to work became more of a possibility. His insurance adjuster suggested that he go to Atlanta’s Shepherd Center for an intensive outpatient program.

“After my wife and I prayed about it, we decided that wasn’t the right choice for us,” Lawrence said. “We knew MRC’s outpatient clinic in Ridgeland had all of our needs met, and there was no sense in me being separated from my family.”

MRC’s outpatient therapy clinic in Ridgeland is home to Quest, a comprehensive outpatient program for people with brain or spinal injuries who wish to make a successful return to work, school or home life. There, physical therapist Patricia Oyarce oversaw Lawrence’s care, with the goal of getting him back to work.

“The first time I walked in for my evaluation, it was all hands on deck,” Lawrence said. “It was like she knew me and knew what I needed and had known me all my life. They made a plan for how they were going to get me back right. They told me I could go as far as I wanted or as little as I wanted, depending on how much effort I wanted to put into it. So I decided to give it 100 percent.”

Oyarce knew that his myclonus had to be addressed before anything else.

“He came to us using a wheelchair, and his myclonus was more than I had ever seen, at least at the outpatient level,” Oyarce said. “Getting his movements under control was the main thing when we started our therapy. Not just for therapeutic reasons, but also for his safety during therapy.”

“We worked with him a lot on his coordination,” said occupational therapist Kari Richeson. “Myclonus is a lot of random, jerky movements, and there’s not a lot you can do to treat it directly. So you focus on strengthening, and practice coordination in spite of the myoclonus.”

“Being in the water allowed him to do many more exercises without needing as much assistance to maintain his balance and guarantee his safety,” Oyarce said.

“It was amazing how dedicated Patricia was about my case,” Lawrence said. “She would tell me that she was researching my diagnosis to find out how to better treat me. And then we would go at it head on. She never let me quit. She constantly pushed me. If it wasn’t for people like her, there was no way I would have been able to get back to where I needed to go.”

One of Lawrence’s biggest milestones was when he no longer needed to use a wheelchair. Then Oyarce put him to work using the clinic’s Walker View treadmill, which provides real-time feedback on a user’s gait to help correct any deficiencies. As his walking improved, she moved him to running on the clinic’s AlterG treadmill, which offloads a user’s weight using pressurized air, allowing for lower impact workouts.

“I used interval training, which is bursts of running alternated with walking,” Oyarce said. “We also continued to use the Bioness on the treadmills, which was very, very helpful.”

To be cleared to return to work, Lawrence would have to pass tests in shooting, driving and physical ability, much like a new recruit. Occupational therapist Allison Harris helped him complete MRC’s driving rehabilitation program to be cleared to drive again. And he worked with Richeson to complete the other necessary steps to get cleared to work.

“He helped with a lot of the communication with his workplace,” Richeson said. “As we were negotiating things, I could tell that he was very well respected by his peers. They really wanted to accommodate him coming back at whatever pace he could handle. They were really great in working with us.”

As his abilities continued to improve, Oyarce then began to focus on specific therapies that would help him complete his physical challenges.

“I would envision the scenarios, like what if he had to chase someone on the street, or if he had to use his firearm from a kneeling position,” Oyarce said. “So I started incorporating lunges, kneeling exercises and yoga training.”

Oyarce also found a unique way to incorporate Interactive Metronome (IM) training. During this therapy, the user dons headphones and synchronizes hand or foot movements to a computer-generated tempo.

“We created sort of a simulated shooting gallery using the rhythm of the metronome,” Oyarce said.

Oyarce says that working with Lawrence was a “collaboration” as they discussed what tests he had to pass and discussed ways they could simulate those activities in the therapy gym.

“I could tell that he loves his job,” Oyarce said. “He had accomplished a lot and really wanted to get back to it. So he was totally invested in his recovery.”

“I had no intentions of retiring,” Lawrence said. “I told her that whatever I needed to do to get back to work I would do. On the weekends I would be doing exercises at home.”

In August, Lawrence graduated from the Quest program and returned to work with the Byram Police Department.

“I was a senior patrol sergeant with 25 years of service before I got hurt,” Lawrence said. “I returned back to work at full, modified duty. I qualified to use my firearm, to drive again, and basically to function as a full-time police officer.

“But after speaking with my family and considering the trauma my injury had put them through, I opted to take an administrative position in the department. I now handle training and state accreditation for the Byram police department.”