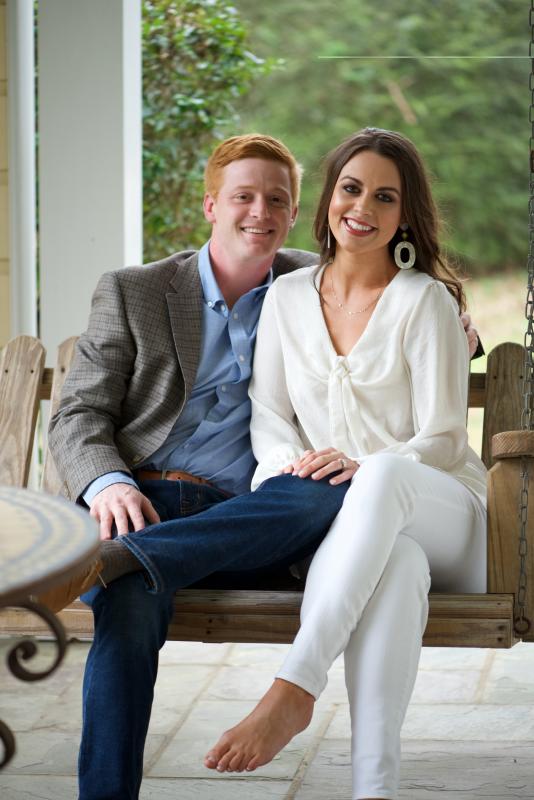 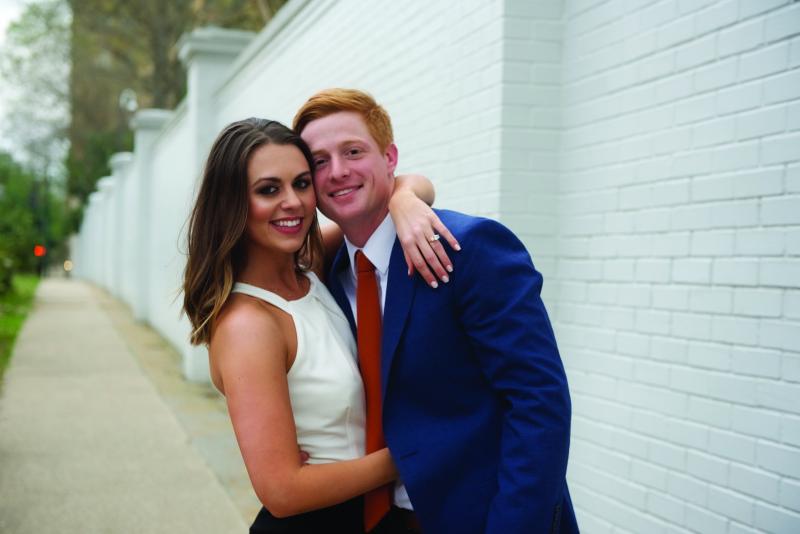 Bride or groom’s side?

At the Oct. 26 wedding of Ben Lane and Walton Fenelon, that question may pose a predicament for guests who work at Methodist Rehabilitation Center in Jackson.

Ben’s father, Sam Lane, Sr., and Walton’s mother, Kelley Fenelon, are both board members of the hospital’s Wilson Research Foundation.

And what fostered their involvement was the same thing that forged a bond between Ben and Walton—the brain injury of a loved one and their subsequent recovery at MRC.

On April 27, 2007, Ben’s brother, Samuel Lane Jr., was hit by a drunk driver while biking at the University of Georgia in Athens. Almost 10 years later, Kelley was in a Pilates class when a tangle of abnormal blood vessels ruptured in her brain.

“For my family and Ben’s family the world stopped when our loved ones suffered traumatic brain injuries,” Walton said. And for a long while, life revolved around the demands of MRC’s brain injury rehab program.

For Kelley, it took two years to migrate through inpatient and outpatient therapy designed to help her overcome significant deficits.

“I started in a wheelchair and had so much to learn,” Kelley said. “From an inability to move my right side and speak, I regained all the power in my leg and arm and even recovered my speech. I still wear a brace for strengthening my right leg, but I am so far ahead of what I might have done without Methodist.”

Due to the severity of their injuries, Samuel and Kelley remember little about the immediate aftermath of their brain trauma. But Ben and Walton can’t forget learning their loved ones might not survive.

“I went up to Samuel, grabbed him hard and said: ‘I love you, brother, don’t quit fighting and I’ll see you soon’’” remembers Ben, age 15 at the time. “Then I kind of lost it.”

On Feb. 28, 2017, it was 25-year-old Walton who was in tears as her mother, Kelley, lay unconscious in the same St. Dominic Hospital ICU room that had once housed Samuel.

“We were told by the neurosurgeon that my mom’s CT scan showed aggressive bleeding in her brain,” Walton said. “We called my siblings, who were traveling as swiftly as possible to Jackson, and together we told our mom we loved her.”

Both babies of their families, Ben and Walton had to grow up fast to handle what was ahead.

“They took on a lot of responsibility and it changed the path of their lives,” said Ben’s mother, Leila.

“Both Ben and Walton have the kind of personality where they did not look away and say this is somebody else’s problem,” Sam said. “They’ve both been very dedicated and extremely devoted. Walton has really stepped up for her mother being an advocate and taking charge.”

As for Ben, “he was a strong and faithful brother,” Samuel said. “He is always down to stand for his friends and family, strong in the face of trauma, and if he says he’ll do something, you know it will be done.”

As Walton dealt with the ups and downs of her mother’s recovery, she came to rely on Ben’s steadfastness.

“One thing led to another and I realized that I had found not only a deeper friendship with him, but a true love,” she wrote on the anniversary of her mother’s injury. “We had walked different yet similarly challenging paths that had taught both of us how to love the other in the most perfect way.”

The lives of Ben and Walton had long overlapped through a social circle made up of family friendships, geographic proximity and shared alma maters.

“I actually knew Ben’s father in high school, then we went on some dates in college,” Kelley said. “I took presents to Leila when she was pregnant with their children, and then when Walton was born, Leila gave me the ‘God’s ABC’s’ print with Walton’s name and birthdate that still hangs in Walton’s childhood room.

The wonderful serendipity of it all makes me want to claim that my mother is up there in heaven, setting all of this up.”

While in high school at Jackson Prep, Ben and Walton dated for a while. But they were firmly in the friend zone when he got word her mother was in the hospital.

“I decided to bake her a cake,” said Ben, who worked at a Memphis bakery at the time. “I mailed it to her with a little card that expressed my condolences and that I was thinking of her during this scary time.”

“Things were still really grim then and we got this amazing pound cake,” Walton said. “My siblings and I loved it and expressed how thoughtful it was of Ben to send it.”

Walton had been living in Nashville before moving to Jackson to be her mother’s caregiver. And Ben remembers being impressed at how Kelley’s whole family worked together to ensure her recovery.

"I saw firsthand and from afar the definition of family--watching Walton, her siblings (Patterson and Kelley Frances), and their other loved ones, pour their lives into their mom's recovery. They dropped everything and were there for her. To me, that is what I am most excited about in our upcoming marriage, Walton's willingness and emphasis to always be there for the people she loves."

As her mother’s therapy stretched on, Walton managed to see Ben on occasion when she visited friends in Memphis.

Their first “official date” as adults was during the Christmas holidays of 2017.

“We were supposed to go on a date with two friends but they cancelled,” Walton said. “Honestly, I was happy that they couldn’t make it. I had hoped that it would be just the two of us.I knew when we started dating this go around that I wanted to get married.”

By the end of January, she was sure of it.

“She was supposed to come to Memphis on January 27, and I got a call from her,” Ben said. “She was upset because her mom had had a mini seizure and had gone to the hospital. I did not hesitate and said I’ll come straight to Jackson.”

Said Walton: “I remember Ben dropping everything and coming to St. Dominic and I thought: This is what love and family is all about. You respond and you’re there for that person. That spoke volumes.”

Ben followed up by moving to Jackson. Ostensibly, it was because he had decided the food business wasn’t for him.

“But a big cheesy part of why I moved is because I was crazy about Walton,” he said. “I had a crush on her since the 7th grade at Prep.”

“I’m so grateful that he moved to Jackson and my whole family is, too,” Walton said. “They love Ben. My siblings got to see our relationship really deepen, as they were often in Jackson assisting my mom in her recovery.”

“He has been a godsend for both Walton and myself,” Kelley said. “He has the kindest heart I have ever seen, and understands my recovery because he’s already lived it with his brother.”

The Lanes also feel fortunate that Walton is joining the fold. “It’s amazing how God works sometime,” Leila said. “We just are so happy about everything. And I’m glad Walton got Ben back to Jackson.”

“A special place in our hearts”

The couple, got engaged on Sept. 28, 2018 in front of Thalia Mara Hall in Jackson. It’s where they graduated from high school. And since they share a passion for downtown Jackson, Ben found it a fitting place to celebrate their union.

The two opted for a long engagement, which has had the benefit of giving Kelley more time to recover.

Kelley initially struggled with aphasia, a language disorder that often strikes people who’ve had strokes. And Walton took comfort in knowing Ben and his family understood.

“Seeing Ben’s patience with my mother is beautiful,” Walton said. “The Lanes understand that when my mom has aphasia, it’s just a repercussion of brain injury.”

Today, Kelley has mostly come full circle. “I am back at Pilates therapy with the dear friend and teacher who drove me to the hospital from a Pilates class on that fateful day,” she said.

And it’s a good thing she’s in training. Lately, she’s been facing the demands of being a mother of the bride for what promises to be a large wedding. Walton has a great number of bridesmaids because she feels so grateful for her friends’ support during her mother’s crisis.

MRC also plays a role in the festivities. To thank those hosting engagement parties, the Fenelons and Lanes are making donations in their names to the Wilson Research Foundation. And Foundation Executive Director Chris Blount has volunteered to play piano for the couple’s rehearsal dinner.

“Methodist Rehab holds a special place in our hearts,” said Leila. “We are so fortunate to have it right here.”

“I am honored beyond belief to be on the Wilson Foundation board,” Kelley said. “I can hardly wait to get my speech up to par so that I can go out and spread what the center does.”

As they get to the “through sickness and health” part of their wedding vows, Ben and Walton will know better than most young couples what that means. They’ve learned how to stand strong when the storms of life roll in.

And come what may, they know they can persevere if they’re together.  “I am confident we can handle any trials in the future because Ben and I will face them together,” Walton said.