‘No quit in him’: After ATV accident causes brain injury, Meridian pitcher pushes hard to get back on mound

Published on February 12, 2020
by Susan Christensen 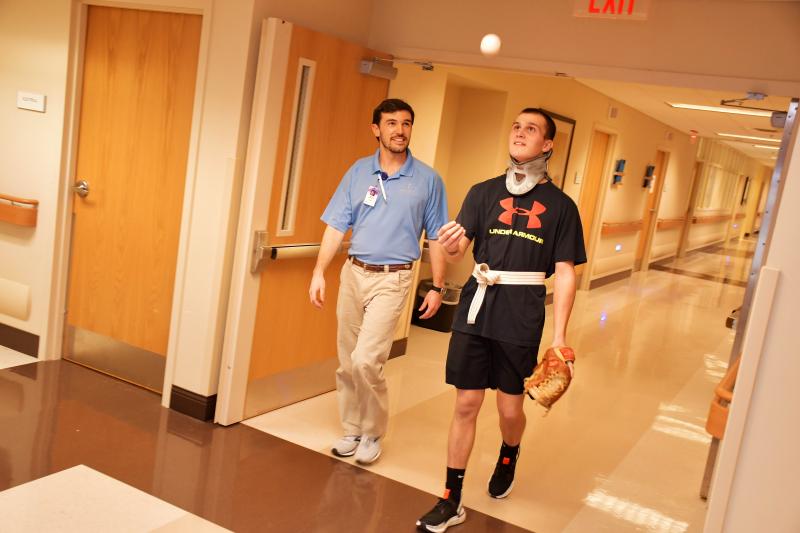 Tossing a baseball while he walks down a hallway, Jake Williams works on a variety of therapy goals with Methodist Rehabilitation Center physical therapist Kollin Cannon, at left. 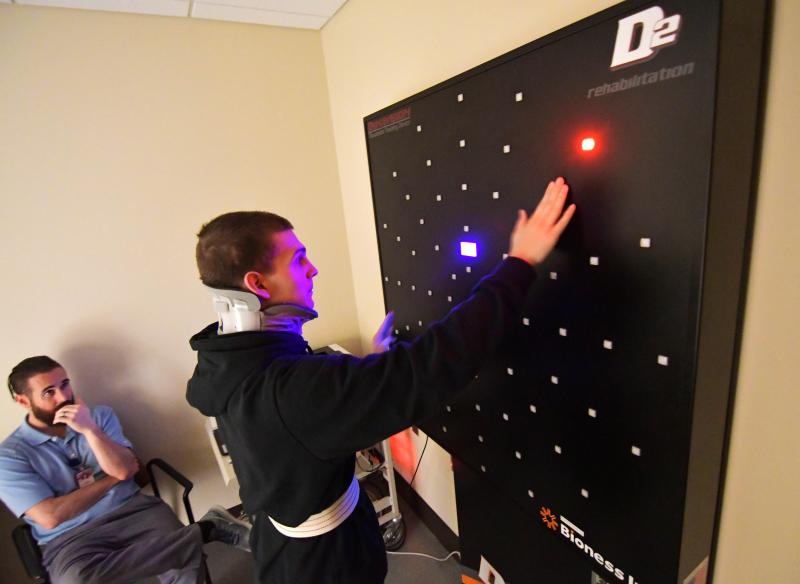 To increase Jake Williams’ upper extremity range of motion and coordination, muscular endurance and motor planning, Methodist Rehabilitation Center occupational therapist Chuck Crenshaw had him do sessions on the hospital’s Dynavision unit. Working with the flashing light board also helped him improve a variety of ocular-motor skills that can be damaged by a brain injury, such as peripheral visual awareness, visual attention and anticipation, eye-hand coordination and visual-motor reaction time. 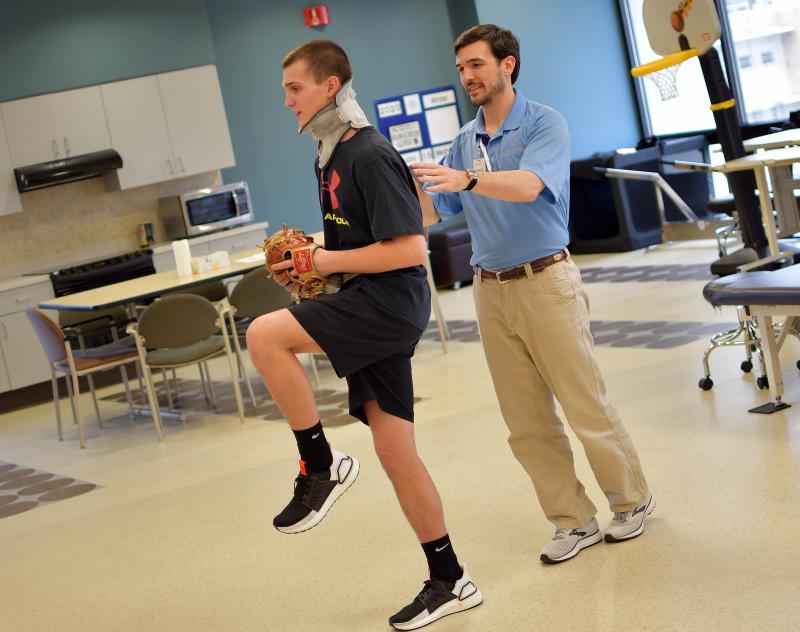 Methodist Rehabilitation Center physical therapist Kollin Cannon, at right, said Jake Williams needed to work on his high-level balance. So he had him practice his wind-up. “They went straight to what he loves,” said his dad, Jay Williams. 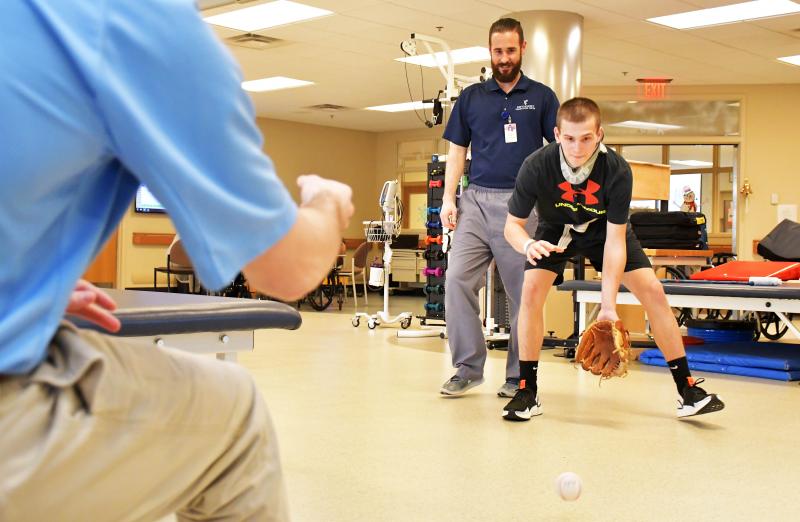 Whenever possible, Jake Williams, at right, said he preferred challenging activities like fielding grounders under the watchful eye of occupational therapist Chuck Crenshaw. “They encouraged me to push my body, and I like it that way,” he said.

His baseball was made of rubber rather than leather.

And his every throw and catch was being monitored by therapists at Methodist Rehabilitation Center.

Yet 16-year-old Jake Williams of Meridian was happily in his element as he tried out his fast ball, curve ball and slider in the Jackson hospital’s fifth floor therapy gym.

After he suffered a traumatic brain injury on Dec. 8, the Clarkdale High School standout feared he’d never return to the game he’d loved since he was a 4-year-old T-baller.

“The first day we didn’t know whether he’d live or die,” said his dad, Jay Williams. “We knew his jaw was destroyed and he had blood on his brain.

“For the longest time, he was not moving his left side at all. But we are people of faith, and we kept believing in Jake’s complete restoration and healing.”

“God was definitely there during the accident because Jake could have been killed or paralyzed,” said his mom, Misti Williams.

Adolescent males have among the highest rates of traumatic brain injury. And like Jake, many arrive at Methodist Rehab as the result of an ATV accident.

“We get so many admissions, from brain to orthopedic injuries,” said Dr. Hyung Kim, Jake’s physician at Methodist Rehab. “I would never let a child ride an ATV because I see too many catastrophic injuries.”

In Mississippi, ATVs are almost a rite of passage as part of the state’s hunting culture. And their popularity is reflected in the ATV statistics collected by the U.S. Consumer Product and Safety Commission. Based on ATV deaths from 1982-2014, Mississippi ranked 14th in the nation with a total of 393 fatalities. From 2015 to 2017, there were an additional 35 deaths and the reporting window is still open.

Jake’s parents did, as well, and had bought him a helmet with a face guard. But he didn’t have it with him when he climbed on an unfamiliar ATV at a friend’s house.

No one saw his accident, so Jake can only guess what happened. “So much is a blur, and I don’t remember,” he said.

But he believes that one of the ATV’s wheels dropped off the pavement as he rode on the streets of his friend’s neighborhood. It then flipped down an embankment and hit a tree.

“My dad thinks my chin hit the four-wheeler, and it knocked my jaw out of place,” Jake said.

“There was also a big gash on his head behind his ear on the right side,” said his dad. Doctors also found a fracture in his neck.

A family friend who was passing by freed Jake from the four-wheeler and called 911 and his parents. They arrived to find their son unconscious and breathing in blood.

“He’s thrashing, and I’m trying to hold his head,” his dad said. “And Misti is trying to get his tongue out of the way so he can get air.”

To help his brain heal, Jake was put in a coma and the pressure inside his skull was closely monitored. After his condition became less critical, he underwent jaw surgery on Dec. 18.

Jake emerged looking much like his old self. But his parents say the surgery seemed to set him back neurologically.

“He had seizure-type activity and his hands were posturing, and it seemed like he had been knocked back to the beginning,” said his dad.

“And he didn’t talk after the jaw surgery,” said his mom. “We didn’t know if his mouth was swollen and hurt or if something happened in surgery.”

By New Year’s Day, their worries had abated after Jake woke up and was able to correctly identify the year.

Eight days later, Jake arrived at Methodist Rehab. He was weak and had lost about 40 pounds. Still, he immediately made progress.

“Studies have shown acute inpatient rehab helps to speed recovery in most cases,” Jeffries said. “And he went from a 5 to a 10 in a matter of days.”

As an athlete, Jake had been in great shape before his accident. And that conditioning and his youth aided his recovery, Dr. Kim said.

It also helped that his therapy team was attuned to his desire to get back to pitching and playing third base for the Clarkdale Bulldogs.

Together, they put Jake to work like two coaches pursuing a championship pennant. “They went straight to what he loves,” said his dad. “This place is amazing.”

“Jake was doing pretty good the first day he came to therapy, but his high level balance needed to be challenged,” Cannon said.

So instead of merely tossing a ball, Jake pitched while perched atop a floor-level balance beam.

“He had lost a lot of muscle mass, so doing some exercises was pretty strenuous for him,” Crenshaw said.

“He was ready for therapy every day and even asked for more therapy,” Cannon said. “It’s very easy when we have motivated patients like him.”

Sessions on the unit can help increase upper extremity active range of motion and coordination, muscular and physical endurance and improve motor planning.

It also can improve a variety of ocular-motor skills, such as peripheral visual awareness, visual attention and anticipation, eye-hand coordination and visual-motor reaction time—all important abilities for an athlete.

To advance his fine-motor skills, Jake worked on another of his passions—playing the guitar. Crenshaw said doing fret-work was a good way for Jake to improve mobility in his left hand.

“It was a blast watching him get better,” Crenshaw said.

His recovery also meant a lot to his teammates back in Meridian, who bought “Stay Strong Jake” bracelets and even gave up their usual Dirty Santa gifts in favor of helping fund his medical care.

“That tells you how they feel about him,” said Clarkdale athletic director and head baseball coach Scott Gibson. “Seeing him come a long way has helped us more than we realized.”

Gibson said Jake was one of the “top district arms” before his accident, as well as “an even better person and student.”

And it has not escaped Jake’s attention how much he almost lost by putting himself at risk for a brain injury.

“If you ride a four-wheeler, you definitely need to wear a helmet,” Jake said. “It isn’t worth having your family and people you love suffer because you chose to make a stupid mistake.”

Today, Jake said he feels “really close to back to normal.” And he credits a good portion of his comeback to his time at Methodist Rehab.

“They encouraged me to push my body, and I like it that way,” he said.

It remains to be seen how soon Jake will reclaim his spot on the Clarkdale lineup. But no one doubts his determination to succeed.

“There’s no quit in him,” Gibson said. “He has a goal set to get back on the field and Lord willing, he will.”

MRC names latest Employees of the Quarter
MRC names latest Employees of the Quarter
Sepehri named director of Quality Management and Medical Informatics
Dr. Dobrivoje Stokic named vice president of research and innovation at Methodist Rehab
Reeves named Director of Human Resources
Stepping stones: Through inpatient, outpatient therapy and the Quest program at MRC, Justin McQueen of Moss Point fights his way back from a brain-injuring fall
MRC names latest Employees of the Quarter
'There he is, that's my kid': Picayune family counting blessings as son overcomes brain injury suffered in hit and run
‘Such a hard worker’: After losing his leg in an on-the-job accident, J. Carmen Arevalo of Pearl applies his work ethic to learn to walk with a prosthesis at MRC
'He's a miracle': After near-fatal brain injury, Houlka's Undray Love is walking, talking and 'taking every day as blessing'
Web design and hosting by U.S.NEXT