“I Can’t Make This Stuff Up”: After life-threatening infection leads to rarest type of amputation, Nancy Smith perseveres with aid of MRC’s experts 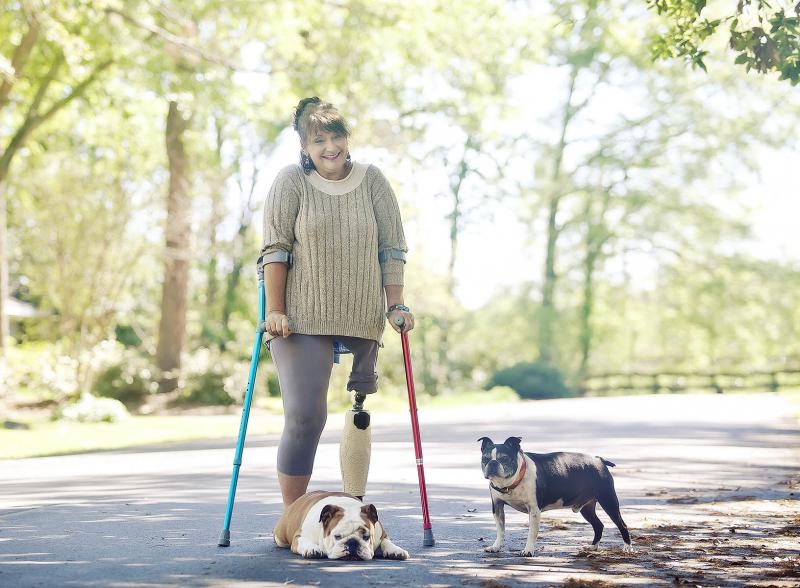 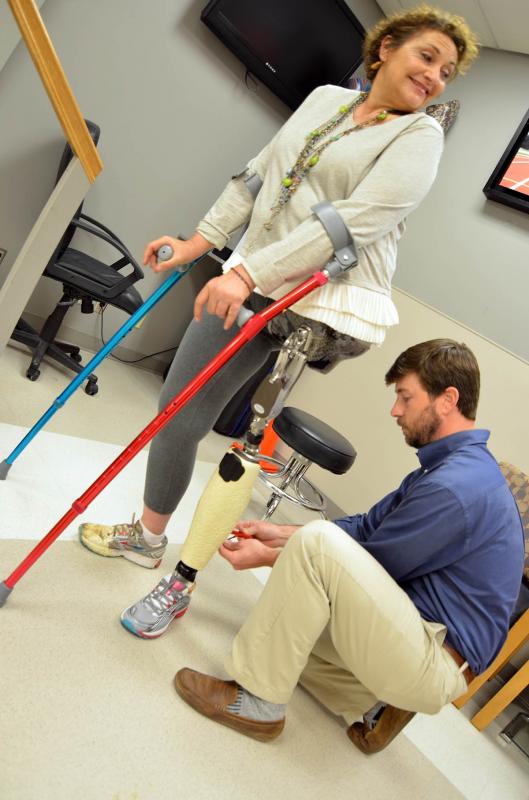 Methodist Orthotics & Prosthetics certified prosthetist Taylor Hankins installs a cover for Nancy Smith’s prosthesis that he had custom-designed and 3D-printed. 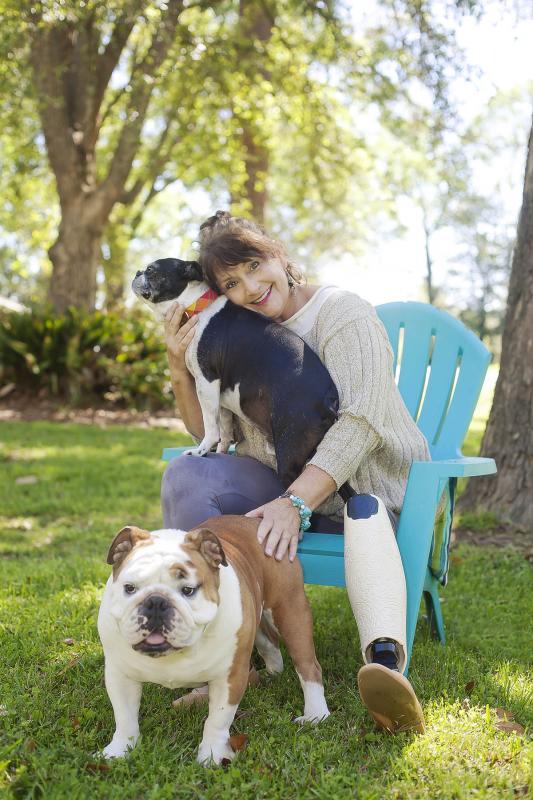 In June 2015, Nancy Smith of Jackson had to undergo a complete hip disarticulation to save her life. It’s an amputation of the entire leg through the hip joint, one of the rarest.

Taylor Hankins, a certified prosthetist at Methodist Orthotics & Prosthetics in Flowood, has only seen three in his career.

“I’ve been a part of working on the prosthesis for each,” he said. “I observed the first one, helped with the second one and Nancy was my first go at it independently. I couldn’t have asked for a better patient to work with. She’s motivated, and she’s probably one of the most positive people I’ve ever been around.”

Few could maintain such a positive outlook facing the series of challenges Smith has been through.

“The name of the book of my life story is going to be I Can’t Make This Stuff Up,” she joked.

Earlier in 2015, Smith had undergone a pancreatic transplant at the University of Mississippi Medical Center to treat her Type 1 diabetes. Unfortunately, her body began to reject the transplant, a nightmare in and of itself. But then a persistent fever was the first sign that something else had gone seriously wrong.

She soon complained of an intense pain in her hip, and her doctors discovered that she had contracted necrotizing fasciitis, commonly known as flesh-eating bacteria.

“I woke up in ICU and my right leg was gone,” she said. “I didn’t know what had happened.”

Taking her leg was the only way the doctors could save her life. Removing the affected tissue is often the only way to stop the spread of the infection.

“I wasn’t supposed to make it, my family had to say their final goodbyes twice,” she said. “So I was very fortunate to just be alive.”

It was difficult to pinpoint how and where she contracted the infection, but necrotizing fasciitis is most common for those with a weakened immune system. Could it have come from a simple scratch she got working in the yard?

“My immune system was so compromised from the transplant, and I’ve been a Type 1 diabetic most of my life,” she said. “It’s hard to say.”

After 12 surgeries and almost two months in acute care, Smith came to Methodist Rehabilitation Center for therapy. As an inpatient, she began adjusting to life with an amputation, with her cheerful outlook intact.

“I felt like, I was so lucky to be there, it was like I had a personal trainer three times a day,” she said. “I’ve had so many other things that have been challenges in my life, I didn’t know what else to do but get up and figure out how to get better. I just always told myself I would walk again. I never questioned that they couldn’t do something for me.”

Her answer came when Hankins first came to visit her at MRC.

“Taylor walked into my room one day and said, I’m going to build you a prosthesis, and I said, ‘OK, let’s do it!’ and it has just been such a blessing,” Smith said. “I didn’t know anything about it, except what little I could read. But since hip disarticulations account for less than 1 percent of all amputations, there’s not that much out there.”

Hankins says that the knowledge base even within his profession is limited.

“You don’t see a lot of people with this particular type of amputation, and you see even fewer walking with it,” he said.

Because of that, the devices available are not as advanced as they had become for other, more common amputations.

“If you look at most hip disarticulation devices, they haven’t changed in years—the socket looks like a bucket they wear, with one hole to put their intact leg through,” he said. “We wanted to get away from that with Nancy, because she’s got great potential to get back to the community and high-level activities.

“Through my research, I found a company that makes a much smaller, easier-to-wear socket—they call it the bikini socket, in fact. That’s where we started. The fit of the socket is the basis of how the entire prosthesis functions.”

While Hankins did his research, Smith left inpatient at MRC, and came for an assessment at MRC’s CORE Clinic, located at the same Flowood facility that houses Methodist O&P.

The clinic is overseen by physical medicine and rehabilitation physician Philip Blount of Methodist’s Pain & Spine Center. Its purpose is to allow patients to see all of Methodist’s outpatient services providers in a single appointment to determine a course of treatment.

Dr. Blount determined that Smith was an excellent candidate to learn to walk again with a prosthesis.

“I was lucky enough to be a good candidate for it,” Smith said. “I had been very active before, so that helped a lot.”

“She has worked with other amputees, and even another with a hip disarticulation, which very few PTs have,” Smith said.

Meanwhile, Hankins had begun the work of building the actual prosthesis, which in her case was a combination of three prosthetic devices: a hip, a knee and an ankle.

“We used a microprocessor-controlled knee, because with her injury she doesn’t have a lot of control,” Hankins said. “She needed something that could do the thinking and reacting for her.”

Once the prosthesis had been built and she was fitted with it that November, she began physical therapy with Klein to become accustomed to it.

“A lot of people we see have balance issues, decreased stamina, range of motion issues—all of that plays into how they walk and how they learn to walk again,” Hankins said. “That’s where PT comes in.”

“We expect everyone who has lost a limb to have some balance problems,” Kleins said. “But we also do specific skilled assessments that pick up on things prosthetists might not, like the functional problems that arise day-in day-out from being up on your feet at home and in the community.”

“I went to Karen twice a week, and we practiced walking in the parking lot, on uneven surfaces, even stairs,” Smith said. “It was all about gaining trust in the leg and working on my balance.”

Klein says with the help of her positive attitude and determination, Smith made quick progress.

“The higher the amputation, the harder it is to learn to walk with the prosthesis, and the more energy and drive it requires,” Klein said. “In a sense we’re like cheerleaders, encouraging patients to stick with it to progress. Nancy was very motivated from day one. She wanted to make leaps and not baby steps. I had to keep telling her it was a marathon and not a sprint.”

Having their clinics in the same building allowed Hankins and Klein to collaborate closely.

“Working with Karen next door was eye-opening because I was able to do my job as Nancy was going through the PT program and I could come over and make adjustments as necessary, which was critical because her device had so many moving parts,” Hankins said.

“He was over for the majority of her therapy sessions from the beginning, to make sure she had a comfortable fit, and that it wasn’t rubbing or irritating her skin,” Klein said.

Hankins would often make fine adjustments on the fly based on Klein and Smith’s feedback.

“What was amazing to me was the tweaking,” Smith said. “Taylor was constantly refining it, customizing it to work best for me. He was like the MacGyver of the prosthetic world.”

In March of last year, Hankins showed his flair for ingenuity by designing a custom cover for her prosthesis.

“You can’t hide a hip disarticulation, like you can with some other prostheses that can be made to look like ‘real’ legs,” he said. “So why not do something a little more fun with it? It stills needs to be covered, it still needs to be protected, so why not make it nice to look at as well? We talked to some graphic designers and had a cover 3D printed. It looks great and functions well, and best of all, she likes it.”

“He had such a great commitment,” Smith said. “He made me the coolest cover ever.”

Not long after, however, Smith suffered a setback. In April 2016, she fell and broke her right leg, and had to spend several months recovering.

“I tripped and fell and immediately I knew I had broken it,” she said. “Before that I never had any fear. It took me several months after I recovered to get back into walking with my prosthesis.”

Smith returned to physical therapy with Klein, and eventually returned to walking on her prosthesis. She now enjoys walking her two dogs, an English bulldog and a Boston terrier, daily.

“Yesterday I played for the first time,” Smith said. “I don’t know if I’ve ever been that excited. I think I’m totally obsessed.”

Smith says her perspective on life, as well as her faith, has always carried her through the darker times.

“As hard as it’s been, I think it’s been a blessing,” she said. “God definitely has got a plan. My life would have not had this many twists and turns if it were not for Him. Mother Teresa once said, ‘I know God will not give me anything I can’t handle. I just wish that He didn’t trust me so much.’

“I can’t imagine having gone anywhere else that could do all that Methodist has done for me. I’m lucky that God put the best people ever in front of me.”