Beyond the hospital: Injuries are overcome and lives restored at Methodist Rehab’s community-based clinics 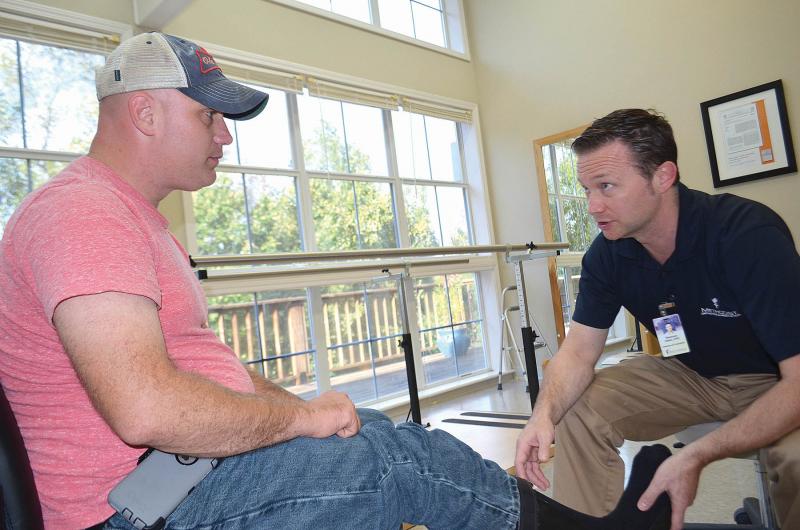 Shannon Aiken, right, clinic manager for Methodist Orthotics & Prosthetics in Oxford, checks how Michael Ragan of Batesville is adjusting to a pair of ankle-foot braces custom-designed to give him more stability. 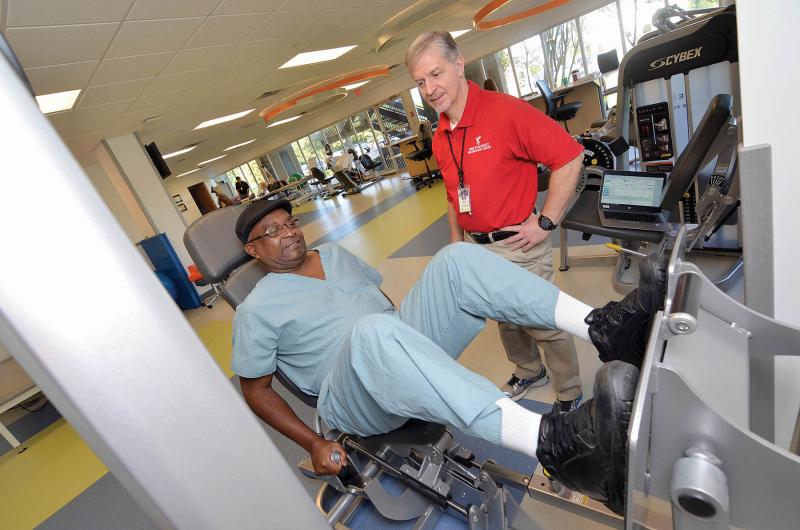 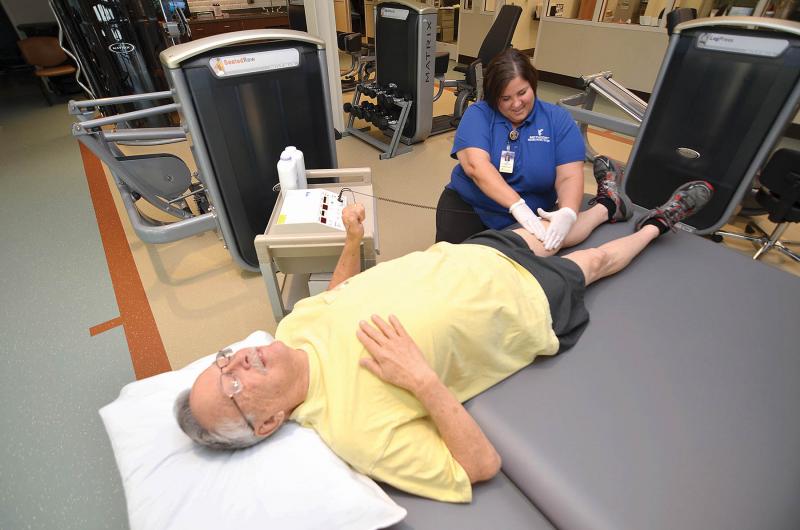 Lori Towery, a physical therapist at Methodist Outpatient Therapy in Ridgeland, applies a type of manual therapy to help George Atchley of Ridgeland recover from laparoscopic surgery on a meniscus tear in his left knee. 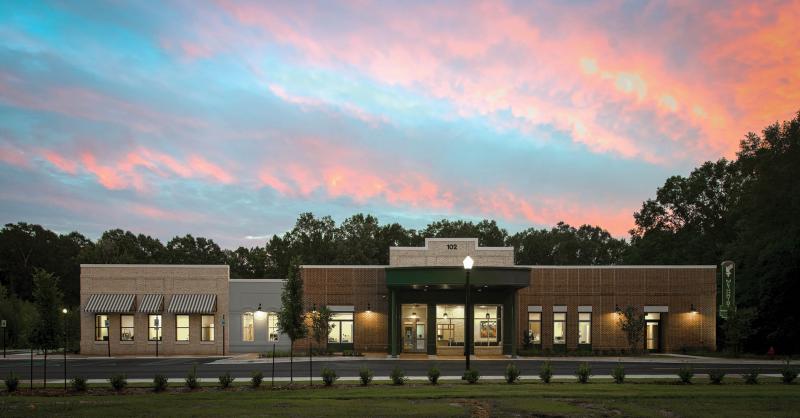 George Atchley of Ridgeland, Miss., is not the kind of guy who rushes into surgery.

He’s lived with a bum knee since he woke up 10 years ago with a burning sensation in the joint.

“The next morning it was completely numb, and it has been completely numb ever since,” said the retired planetarium director for Samford University in Birmingham, Ala.

Atchley might still be ignoring the problem, if not for some pain-related sleep deprivation.

“It started hurting deep down inside, and it was keeping me up,” he said. “When you can’t sleep, everybody tells you that you need to see the doctor. I was like a bear in the morning.”

Atchley underwent laparoscopic surgery for a meniscus tear. And when his surgeon prescribed therapy, Atchley had the referral sent to the new Methodist Outpatient Therapy in Ridgeland.

“My wife had already been going here for neurological therapy, and I liked the people,” he said. “It seemed like a modern facility with all the trimmings.”

“After Methodist Rehab opened in 1975, we realized the recovery of our patients shouldn’t be limited to what they could accomplish during an inpatient stay,” said Doug Boone, vice president of business development and community relations at Methodist. “So we begin looking for ways to provide services in the communities where our patients live.”

Atchley resides 10 minutes from the Ridgeland clinic. And as a close neighbor, he admires how Methodist fashioned the building to fit the surroundings. “With its big front yard and oak trees, it has a lot of curb appeal,” he said.

But he believes the clinic’s best asset is experienced staff like physical therapist Lori Towery.

“You walk into the place and you feel like they’re going to twist your joints,” he joked. “But she took personal interest in me and what was going on. She was friendly and kind, but also direct about getting down to business. When you get with someone like that, it makes you feel confident. They have a path for you, and as long as you stay on that path, you’re safe.”

But whatever the treatment, the goal is to get patients back to the activities they love. And it’s a mission shared by all of Methodist’s outpatient clinics.

When Oxford Orthotics & Prosthetics fit Michael Ragan of Batesville, Miss., with custom-designed braces, it was a life-changing experience for the pastor at Evening Time Lighthouse Church in Courtland, Miss.

Now, he can walk faster and straighter. Climb stairs. Play basketball. Stand up and strum his guitar. And preach without holding onto the pulpit.

“He’s like our poster person,” says Oxford clinic manager Shannon Aiken. “He says all the things we hope to hear people say. Now that we’ve given him stability, he can do more things.”

Ragan is particularly happy that he can be an outdoorsman again.

“Before, I wouldn’t go fishing on a bank because I’d fall and have to crawl up the rocks,” Ragan said. “And when I’d go hunting, I would fall in the woods—sometimes with a gun in my hand. I wouldn’t tell anybody because they’d say you don’t need to go hunting.

Ragan was about 18 when he began suffering the more crippling effects of Charcot-Marie-Tooth (CMT) Disease. Physicians Jean-Martin Charcot, Pierre Marie and Howard Henry Tooth first described the inherited disease in 1886, but it’s still not well-known.

CMT damages peripheral nerves, which relay the signals that initiate movement and transmit sensation. This leads to weakness and numbness in the extremities, typically impacting the feet first. Foot drop—an inability to hold the foot horizontal—is a classic sign of CMT. Other symptoms include muscle wasting, stiffened joints and difficulties with balance.

Ragan made do as best he could growing up and for years managed to work at a machine shop. But when the disease began affecting his hands, “I couldn’t even hold a screw,” Ragan said.

A neurologist finally pinpointed the source of Ragan’s problems. And when the physician referred Ragan to MRC, “I came the same day,” said the father of three. “If it was going to be something to help me, I wanted to get it done.”

To address Ragan’s concerns, Aiken custom-designed a pair of plastic AFOs (ankle-foot orthoses).  They support and properly align his lower legs and give him more stability.

Aiken said it takes about two weeks to produce braces, but making sure they meet expectations is an ongoing process. A bit of tweaking is often in order to get just the right fit and function. But Ragan’s filled the bill from the start.

“It was nice almost immediately,” Ragan said. “I’ve been able to do the best hunting I’ve done in 20 years.”

While many come to MRC’s outpatient clinics to reclaim favorite leisure activities, others are striving to return to work.

Perry Hudson, for example, sought out Methodist Rehab’s expertise after a fall at his workplace, the Yazoo County Correctional Facility. The tumble battered his right side, leaving behind a sprained ankle and bruised knee. But the worst of it was damage to the L-5 disc in his spine.

To address his severe back pain, Hudson traveled to Flowood to take advantage of two Methodist clinics—Methodist Pain & Spine and Methodist Outpatient Therapy.

Dr. Philip Blount, a physical medicine and rehabilitation physician at Methodist Pain & Spine, offered a two-pronged approach to Hudson’s recovery. He recommended a pain-relieving injection, followed by a course of physical therapy.

Steve Friend, a veteran physical therapist at Methodist Outpatient Therapy in Flowood, began working with Hudson in July. And Hudson doesn’t believe coincidence brought them together.

“I had high expectations that the Lord would lead me to the right facility to regain all my abilities,” said Hudson, who’s also a pastor at Helping Hands Outreach Ministry in Yazoo City. “And since I’ve started therapy, by the grace of God everything is going wonderfully. Right now my pain level is zero.”

On a 1 to 10 scale, Hudson said his agony was more like an 8 when he first arrived at MRC. “I couldn’t bend over or turn left or right. And I had problems walking and balancing.”

His limited standing endurance meant he also couldn’t preach as long as before. So his wife, church music minister Alberta Hudson, made sure he didn’t overdo it. “She would give me the eye or hit a tone on the keyboard,” he said.

To help Hudson recapture the capacity to do more, Friend said he focused on tailored stretches and exercises for his back.

“Everybody’s a little different, but I try to make the therapy program as active as possible, rather than the person receiving a lot of passive procedures,” Friend said.

The exception was when Hudson had back pain flare-ups. Then he underwent some therapeutic taping and manual therapy, a hands-on treatment used to relieve muscle spasms, release tension and improve flexibility in the joints.

Hudson also benefited from sessions with the HIVAMAT 200, a device that uses an alternating electrostatic field to create deep oscillation pulsations. It helps with swelling, muscle tension, poor blood circulation, sprains and strains and fibrous build-up from surgical trauma.

Hudson said he liked that Friend took a whole person approach to his care. In addition to monitoring the health of Hudson’s right knee and ankle, Friend also buoyed his spirits. “I’ve been under a lot of therapy in the past, but I have had no one like Mr. Friend,” Hudson said. “He’s a Godly man, and he encouraged me with a lot of scriptures.”

The goal was to get Hudson back to work, and Hudson said he was fortunate to have an employer willing to work with him.

“It makes our job easier when those pieces fall together,” Friend said. But he added that Hudson has to be commended for his commitment to getting better.

“Right on time, he has met every goal and milestone,” Friend said. “It’s kind of a perfect case of him being willing and ready to take information we’re giving him and going forward with it. He’s so smart about understanding the principles of how his back works—what to do and what not to do.”

On Aug. 28, Hudson went back to work as a certified trainer for staff at Yazoo County Correctional Facility. And he said it was truly an answered prayer.

“There was a time when I first came to Methodist when I could hardly bend over. I came in house shoes. I kept praying for God to strengthen my mobility and he did. When I leave Methodist, I feel great. There’s no pain and no stiffness. Right now I feel like I’ve never been injured.”