Published on January 15, 2020
by Susan Christensen 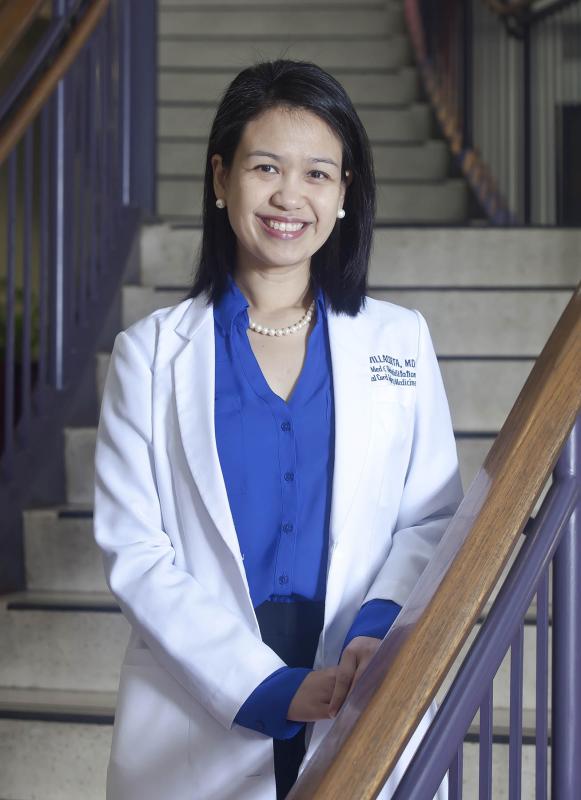 Dr. Jennifer Villacorta can’t say she ever saw herself as a medical director.

“They are usually older, and I’m still wearing headbands,” she joked.

But when she was offered the position at Methodist Rehabilitation Center, the spinal cord injury specialist decided to “step up to it.”

“After being on the front lines as a physician, I realize there is so much you can do for patients and the medical team when you have a voice. And that’s what I’m excited about.”

Villacorta joined MRC’s staff in 2016, and she immediately became a significant contributor to its mission, said MRC President and CEO Mark Adams.

“It was not a hard decision to give her the additional responsibility of medical director,” Adams said. “She has become a very important part of our leadership team in this new role.”

Villacorta says it’s not the first time she has benefitted from a serendipitous career move. “I seem to always land where I never would have imagined I would be most utilized and grow as a person and as a professional,” she said.

Growing up in the Philippines, she knew her parents expected her to become either a doctor, lawyer or engineer. Being a physician seemed to be the best fit.

As a stepping stone to medical school, Villacorta chose to study physical therapy. She found herself endeared to the profession and particularly drawn to the very unique experience of treating spinal injury patients.

“It was challenging in a fulfilling way,” she said. “And I actually started entertaining the idea of not continuing on to med school.”

But when she was accepted to the University of the Philippines College of Medicine in Manila on her first try, she figured her fate had been decided and she proceeded to earn her M.D.

Still undecided about a specialty, Villacorta sought the guidance of a mentor who happened to be a physiatrist and suggested a career in physical medicine and rehabilitation.

While her background as a physical therapist made a PM&R residency a logical choice, Villacorta was hesitant at first. “PM&R was not as developed in the Philippines back then, and I was afraid it might not be as challenging or interesting.” It was then that she was told, “Go to the states (USA), and find out.”

Villacorta then pursued and completed her PM&R residency at the University of Arkansas for Medical Sciences in Little Rock, Ark. Next came a fellowship in spinal cord injury medicine at the University of Texas Health Science Center and the Baylor College of Medicine in Houston, Texas. After a brief stint as the Medical Director for Outpatient SCI Services at the Rehabilitation Institute of Michigan (RIM), Detroit Medical Center, she became an admitting physician for MRC’s SCI program in 2016.

Board certified in physical medicine and rehabilitation and SCI medicine, Villacorta is also assistant professor of neurosurgery and a member of the Neuroscience Institute at the University of Mississippi Medical Center.

Her wide range of responsibilities makes for some demanding days. But it also gives Villacorta a big-picture view of how MRC can best contribute to the success of rehabilitation medicine in Mississippi.

“The resources are all here, it’s just a matter of utilizing and building on them,” she said. “You’ve got to make sure everyone is on the same page and moving in the right direction.

“Leadership doesn’t mean you just get to be ‘the boss’. I find being a leader means you have the opportunity and the privilege of representing the people you work with, too.”

To that end, Villacorta enjoys a collaborative relationship with her fellow physicians at UMMC and MRC, as well as the researchers at MRC’s Center for Neuroscience and Neurological Recovery (CNNR).

“Dr. Villacorta has really taken charge of the medical directorship and has already implemented several process improvement changes to allow for better patient flow and patient care, while also helping to improve the quality of life for all providers,” said Dr. Hyung Kim, Division Chief of PMR at UMMC. “She has so far done an excellent job in her new leadership role. She remains a pleasure to work with.”

“I love the passion she has for the patients and programs,” added Dr. Keith Tansey, a CNNR senior scientist who also is a professor of rehabilitation medicine in the UMMC Department of Neurosurgery and a physician for the Spinal Cord Injury Clinic at the Jackson VA Medical Center. “She knows what the highest standard is and wants to have it here.”

Villacorta said she likes to focus on identifying and breaking the barriers that prevent rehabilitation goals from being achieved.

“That’s what we’re here for. To push the limits and hope to continue making improvements where we think we have ‘settled.’ Sometimes this where the art of medicine comes in,” she said.

And when it comes to patient care, her vision is to create and maintain a continuity between the acute care offered at UMMC and the rehab services available through MRC.

“If we can have the opportunity to get involved in the patient’s care as early as even before surgery, we can accomplish a care that is comprehensive and optimal for our patients.”