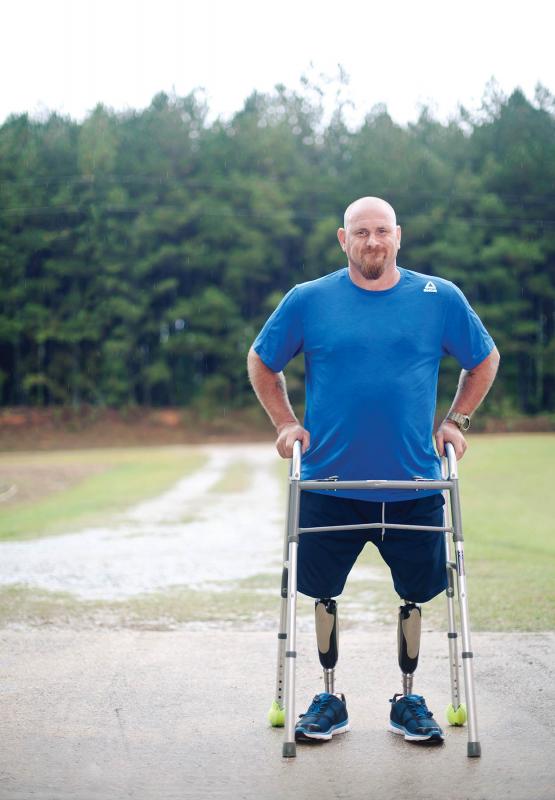 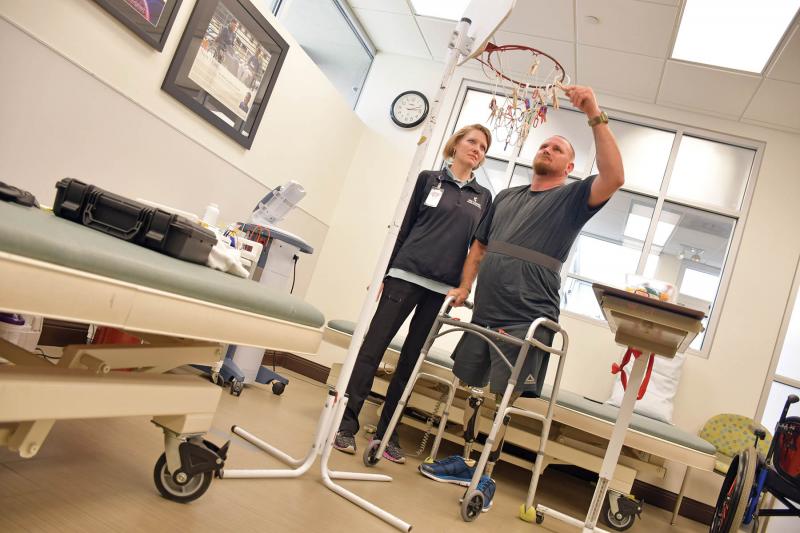 MRC physical therapist Karen Klein had Hank Graham perform activities standing while wearing his prostheses, such as placing clothespins on this basketball goal, to work on his balance. 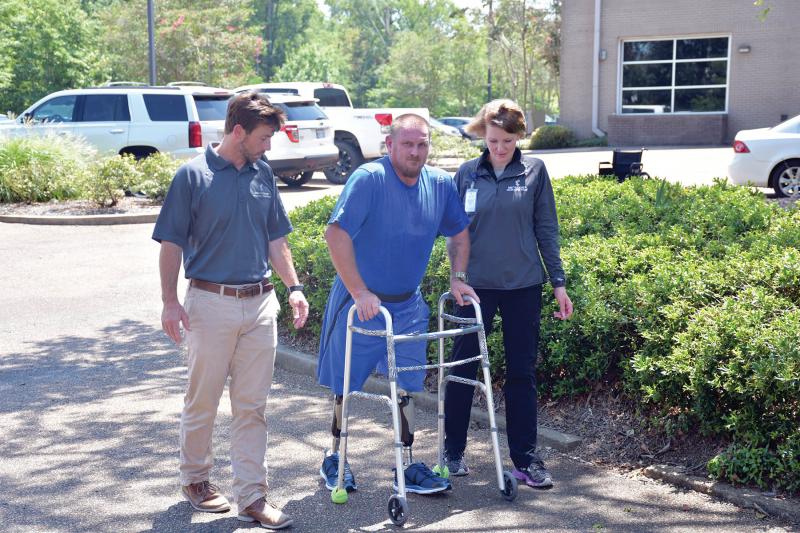 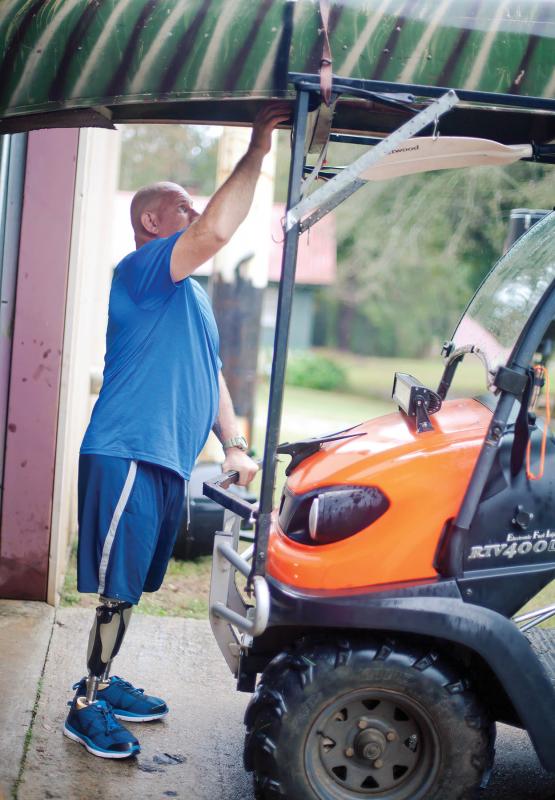 An avid outdoorsman, Hank Graham uses his prostheses to maintain his active lifestyle, such as driving his ATV and launching his fishing boat.

Since he lost his legs in an auto accident, Hank Graham’s life has been full of ups and downs.  He has been in and out of physical rehab facilities, had multiple surgeries, experienced some setbacks, even weathered personal tragedy.  Still, his belief he would walk again rarely wavered.

And with the staff at Methodist Rehabilitation Center, he found a team of specialists who believed in him, too.

“Hank had been so many places, and it seemed others had not given him much hope,” said Karen Klein, a physical therapist who specializes in post-amputation therapy at Methodist Outpatient Therapy in Flowood. “When he first came to me, I really did not know a lot of his medical history and how much he had been through. But when we tried walking, I knew if there was anyone in his situation who had the potential, it was him.”

“When I first met him, I also saw he had potential and a lot of drive to realize it,” said Taylor Hankins, a certified prosthetist at Methodist Orthotics & Prosthetics. “I know he had some setbacks. People with amputations as a result of trauma often do. Their initial surgeries are often lifesaving procedures and are not focused on their future rehabilitation needs.”

“I thought that the life I knew was over with”

Indeed, it was an amputation that saved Graham’s life. On July 23, 2015, he was driving an 18-wheeler transporting a load of live catfish down I-20 near Forest when he crashed.

“I don’t know why or how I went off the road,” Graham said. “I remember waking up and hollering for help, and that my back was really hurting. I was pinned under the truck for four hours while they tried to rescue me. I was right under the right front wheel, with the motor barely hanging above me.”

The paramedics had to amputate his right foot at the scene to get him free before the motor fell and crushed him. He was airlifted to the University of Mississippi Medical Center, where he was in a coma for nearly a month.

When he awoke, his right leg had been amputated above the knee due to gangrene. His left leg, which was shattered in several places in the crash, had been amputated below the knee. He had also broken his neck and his shoulder and severely bruised his spinal cord. Graham spent three months recovering in the ICU before going to an out-of-state inpatient rehab for three months.

“They told me that I was paralyzed from the waist down,” Graham said. “I was a very outdoorsy person, so it was really hard to hear that I would never get out of a chair. People don’t understand what losing your limbs is like. I thought that the life I knew was over with.”

When Graham returned to Mississippi, he began outpatient therapy at St. Dominic Hospital.

“I still couldn’t move at that point,” Graham said. “But they worked the muscles in my limbs, and I started having some movement again. That’s when they fit me with some stubbies.”

“Stubbies” is the term for short prosthetic legs often prescribed for patients with a double amputation. They allow the patient to walk short distances and reduce the need for a wheelchair in the home. The prostheses are designed to be much shorter than the patient’s normal height and lack knee joints. Their lower center of gravity and simple design helps users practice their balance in preparation for using prostheses with knee joints.

After months of therapy, Graham returned to his home in Decatur, nearly a year and a half after his injury. He says that was a particularly low point.

“I couldn’t do much of anything,” Graham said. “I could only use my wheelchair, but I couldn’t go much of anywhere outdoors because I couldn’t roll across grass and rough terrain.”

Graham then came to MRC’s Assistive Technology Clinic to get a custom wheelchair that would allow him greater freedom outdoors.

“We knew he was very active, that he lived on a lot of land, and most of his daily life was spent outdoors,” said Heather Maloney, a certified seating and mobility specialist at the clinic. “We though he was a great fit for an Extreme X8.”

The Extreme X8 is an all-terrain, off-road power wheelchair. It would allow Graham to get around his land easier and do things the he enjoyed again, like fishing and hunting.

“But, it’s a big chair, so it’s hard to transport,” Maloney said. “So we also got him a folding frame chair that was suited for travel.”

Though his new wheelchairs helped him get back to some of the things he loved, Graham still believed he could walk with prosthetics. Doctors removed more of his left leg in hopes an above-the-knee amputation would make it easier for him to wear a prosthesis.

“Because she would want me to”

On March 9, 2018, Graham experienced another tragedy. His fiancée, who he had been with for four years, died suddenly of a stroke.

“She was just like a nurse,” Graham said. “She had even taken some classes to learn how to care for me. She had been by my side through everything, was there 24/7.”

Graham says after that he was ready to give up.

“But in about May, I think I woke up and finally started to get over her death,” Graham said. “I decided that I wanted to walk, and I wanted to do it for her. I wanted to get back to life, because she would want me to.”

Graham went to see UMMC orthopedic trauma surgeon Dr. George V. Russell, Jr., who performed surgery on both his legs to repair the muscles he needed to use a prosthesis. After Graham’s surgery, his legs were attached to a traction device that worked to reposition them so that he could stand up straight.

He then came to inpatient therapy at MRC, where he worked on his upper body strength. After about a month, he had the device removed and began working to strengthen the muscles in his residual limbs. He then transferred to MRC’s outpatient facility in Flowood, where he started working with Klein.

“He always came to therapy excited, and his attitude motivated other patients,” Klein said. “His favorite saying, when someone asked him how his day was going, was ‘I’m doing pretty good for a legless man,’ which always got a laugh.”

As Graham worked with Klein, Hankins began to assess his potential for using prosthetics.

“We kind of had a clean slate,” Hankins said. “He had gotten healthier, so his activity level was the highest it had been since his injury. His residual limbs were healed well through both surgery and rehab, so we didn’t have to deal with issues there.”

Both Hankins and Klein recognized his potential after seeing him walk on his stubbies.

“I thought moving from the stubbies to regular prosthetics might throw him off,” Hankins said. “He would be higher off the ground, so balance was more important. But that’s where physical therapy comes in—to increase balance, control and stamina.”

“I worked a lot on him finding his balance point, and we had to build his endurance,” Klein said. “It takes an incredible amount of energy for a bilateral, above-the-knee amputee to walk with prosthetic limbs. What Hank had going for him was he had a lot of muscle mass, and he was very strong. And not just physically, he had a strong will.”

Next, Hankins had to determine what prosthetic devices would work best for what Graham wanted to accomplish.

“Hank’s goals went beyond normal ambulation,” Hankins said. “He wanted to be able to walk around his land, to be able to hunt, fish, even swim—to be the active person he was before.”

So Hankins had him demo some mechanical legs he felt could help him achieve those goals.

“Once we got him into prosthetics with knees that articulated, we saw him cash in on that potential we saw very quickly,” Hankins said. “He just stood up and started walking. He took everything in stride and did really well.”

The prostheses Graham was fitted with were durable for his active lifestyle and allowed him the freedom to get back to the activities he enjoyed.

“We did a lot of therapy activities where I had him perform actions standing in front of a table,” Klein said. “He loves to cook and to man a grill, so that was one of the things he wanted to get back to doing at home. The prosthetics he has are able to lock into place in a standing position, which allows him to use his hands for other tasks, and not just holding onto a walker.”

By the time Graham was discharged, Hankins was blown away by his progress.

“I’ve worked with patients that have bilateral, above-the-knee amputations in the past, but none that walk as well as he does,” he said. “You have to consider he had only had the stubbies before. So it had been years since he had knees that bent, since he had walked on realistic feet. In fact, he hadn’t owned shoes since his amputation, so we had to loan him a pair at first.”

Throughout his outpatient therapy Klein and Hankins worked together closely, a benefit afforded by Outpatient Therapy and Orthotics & Prosthetics being across the hall from one another at the Flowood facility.

“We make static devices for dynamic people that are constantly growing and learning and changing,” Hankins said. “So being able to collaborate so closely with Karen and make adjustments as she helped him progress was invaluable.”

Graham has seen other benefits from coming to MRC’s east campus.

“We did find that after we got going with his prosthetic training and he was back on his feet every day, that he did have some low back pain that was limiting his progress, which is not unusual for being in a wheelchair for so long,” Klein said. “So he also did some physical therapy with MRC orthopedic specialist Joe Jacobson to address it. Hank really benefited from us having our ortho department right next door. Since he had to travel a good distance for our sessions, we could coordinate so he could have multiple appointments in one day.”

Today, Graham has returned home to his land in Collinsville, where he is back to enjoying the great outdoors.

“Hank will tell you he’s the master of the grill, the master of fishing, the master of hunting—and he takes pride in all of it,” Klein said. “He can’t stand to be cooped up inside. I know he feels like his prosthetics have given him back the life that he lost.”

“I’ve accomplished everything they have wanted me to accomplish,” Graham said. “I’ve proved everybody wrong about what I can do, and I will keep on proving them wrong. Now, I can do anything I want to do or go anywhere. I’m truly excited about life again.”