Published on February 5, 2020
by Susan Christensen 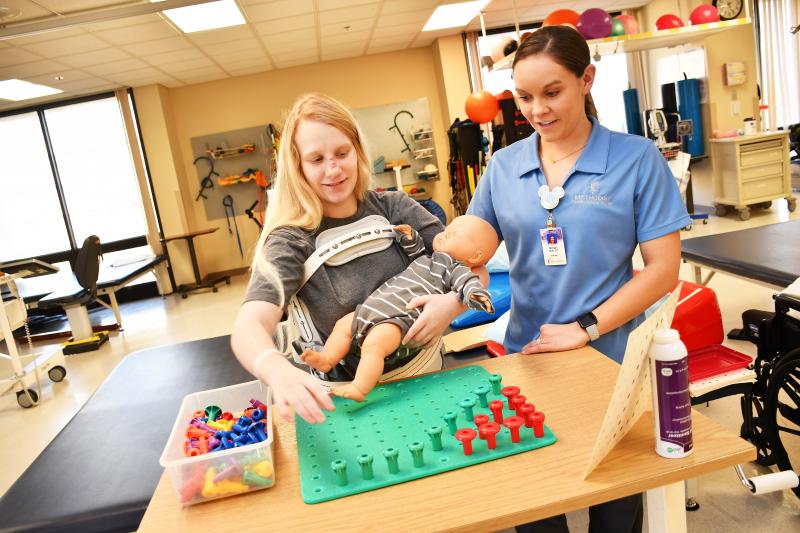 Occupational therapist Morgan Nutt, at right, works with Hailly Bernard on standing balance during a therapy session at Methodist Rehabilitation Center in Jackson. Bernard is holding a baby doll weighted to simulate her child’s size to help her practice her new mom duties. 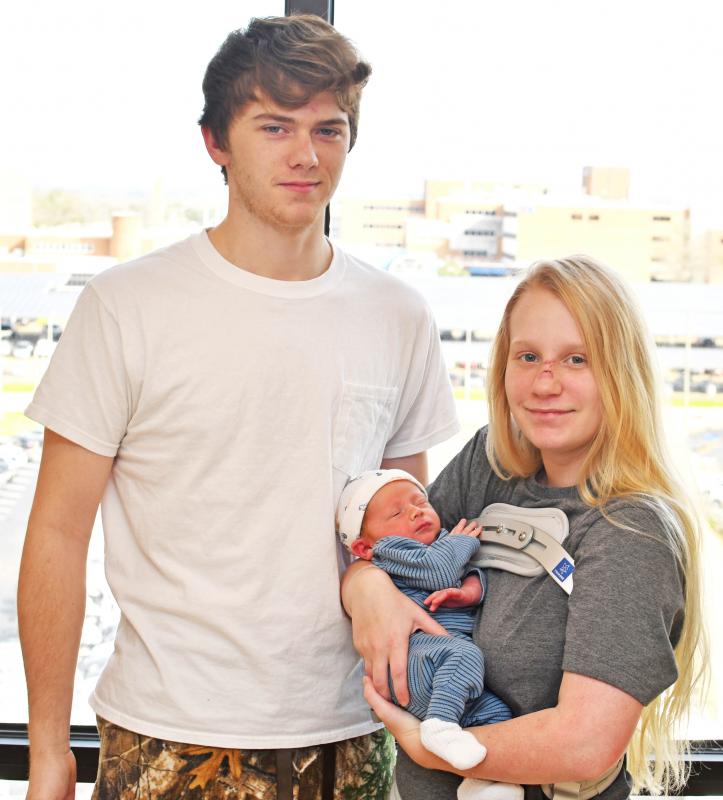 Austin Rone and Hailly Bernard feel fortunate to have survived an EF-3 tornado and that their baby, Grayson, suffered no ill effects from being born a month early. “I knew I had to protect my baby, so I was shielding my stomach the whole time I was getting slammed around while things were getting thrown at me,” Bernard said.

Hailly Bernard’s story could be headlined: Mother Nature vs. Mother-To-Be.

In the wee hours of Jan. 11, the eight-months-pregnant 18-year-old was sent flying by the force of an EF-3 tornado in Drew.

The experience earned her the nickname Dorothy from her physician at Methodist Rehabilitation Center and a ton of respect from her therapy team.

“She is really a pretty strong lady to have gone through all this,” said Chris McGuffey, her physical therapist at the Jackson hospital. “She broke her pelvis and also had a spinal fracture in her lower back. Thank goodness there were no neurological issues.

“Mostly she had to deal with pain, but not as bad as you would have thought being thrown by a tornado. She said labor pain was worse.”

The storm hit at 4:15 a.m. while Bernard and boyfriend Austin Rone were sound asleep in his father’s mobile home in Drew.

“I had checked the radar, and it was supposed to be just light rain,” Rone said.

But Bernard said she awoke to “the scariest noise I ever heard.”

“I started hearing really bad winds and bangs, so I got up to cut the light on to see what it looked like. The walls and doors looked like they were breathing, so I started screaming.”

A groggy Rone told her to go back to sleep. But she was wide awake and praying as she tried to call her mom.

“The next thing we knew, all the walls came unattached, and I went flying with them, while Austin was still on the floor having furniture slamming into him,” Bernard said. “I thought he was dead or going to be dead.”

As she clicked into survival mode, Bernard’s thoughts turned to her pregnancy.

“I knew I had to protect my baby, so I was shielding my stomach the whole time I was getting slammed around while things were getting thrown at me. It felt like I was in an ocean trying to swim to the surface.”

Finally, she hit the ground in a field behind the mobile home. With a broken pelvis, she couldn’t stand. So she begin crawling for help, all the while praying.

“I opened the door and she was right there,” he said.

“He ran over and grabbed me, and I instantly felt relief,” she said. “God had heard me.”

Medical help arrived soon and Bernard was stabilized at a Cleveland hospital. She then traveled by ambulance to the University of Mississippi Medical Center in Jackson.

Since she was still a month away from her due date, doctors hoped to delay her delivery. But by the evening of Jan. 12, she was headed to surgery for an emergency C-section.

Despite being premature, little Grayson—nicknamed Nado—was healthy on arrival. “My baby doesn’t have one thing wrong with him—he’s my miracle baby,” Bernard said.

Bernard, on the other hand, looked a little worse for the wear, sporting gashes on her nose and left foot, bruises and cuts all over her body and a brace to stabilize her back.

Still, she was gung-ho as soon as she started therapy at Methodist Rehab on Jan. 17.

“For a patient her age, it’s unusual to expect the kind of focus and determination she had,” said Dr. Jennifer Villacorta, her physician at Methodist Rehab. “But she had a lot more than just herself to motivate and focus on now; she had little Grayson to go home to and take care of too.

“She was able to accomplish a safe and appropriate early discharge too, which is a testament to her tenacity.”

Since Bernard was eager to get home to Greenville and her baby, therapy centered on physically preparing her for childcare duties.

“We always tailor our program to the individual and what they have to do,” McGuffey said. “She is a new mother so everything was built around her and the baby.”

“We did simulated tasks with a weighted baby doll,” said Methodist Rehab occupational therapist Stephanie Lynchard. “She did diaper changing, putting the baby to bed, getting the baby dressed and feeding the baby.”

Lynchard said she mainly worked with Bernard on improving her balance. “You don’t want her to fall with the baby,” she said. So she spent time emphasizing the safest ways to pick up and carry her child. “I did a lot of education with her on positioning, not reaching forward from her hips when holding objects—including the baby.”

While Bernard was walking when she left Methodist Rehab on Jan. 29, McGuffey recommended she use a rolling walker for long distances until her pelvis and back were completely healed.

As she left Methodist Rehab, Bernard was more than ready to get back home and even go back to work as a waitress at La Sierrita in Greenville.

Bernard has fond memories of all the Methodist Rehab staff who were exceptionally kind to a new mom and her baby.

And they in turn won’t soon forget the teen who triumphed over a Delta twister.

“I’ve seen all manner of people who’ve had car wrecks, gunshot wounds, diving accidents and falls from buildings and tree stands,” said McGuffey, who is an Assistive Technology Professional, a Seating and Mobility Specialist and a certified Neurological Clinical Specialist. “But this is my first patient to be picked up and thrown by a tornado.”

'There he is, that's my kid': Picayune family counting blessings as son overcomes brain injury suffered in hit and run
'The Lord was watching out for me': Flora hunter grateful to be walking again after suffering several fractures in 22-foot tree stand fall
Faster and better: Methodist Orthotics & Prosthetics offers free screenings for Bioness L300 Go, an advanced neuroprosthetic device for controlling foot drop
Web design and hosting by U.S.NEXT