'The Lord was watching out for me': Flora hunter grateful to be walking again after suffering several fractures in 22-foot tree stand fall

Published on November 24, 2020
by Susan Christensen 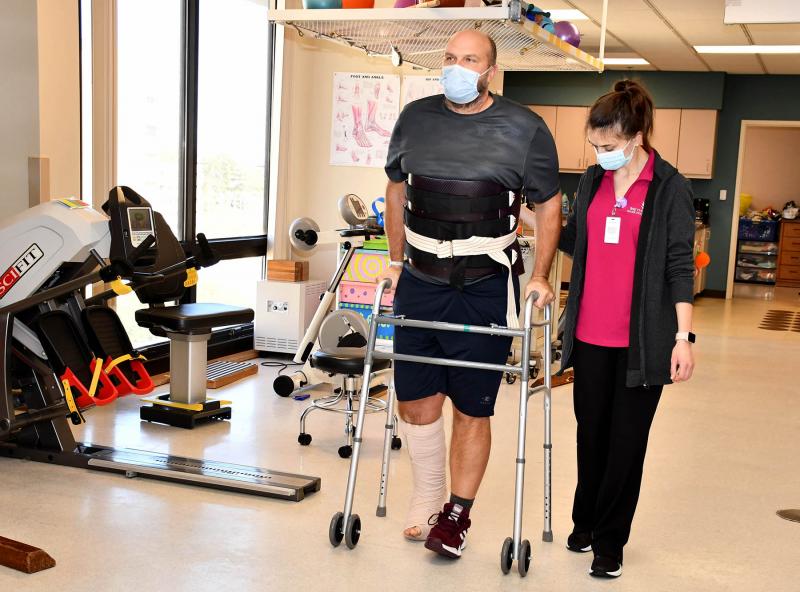 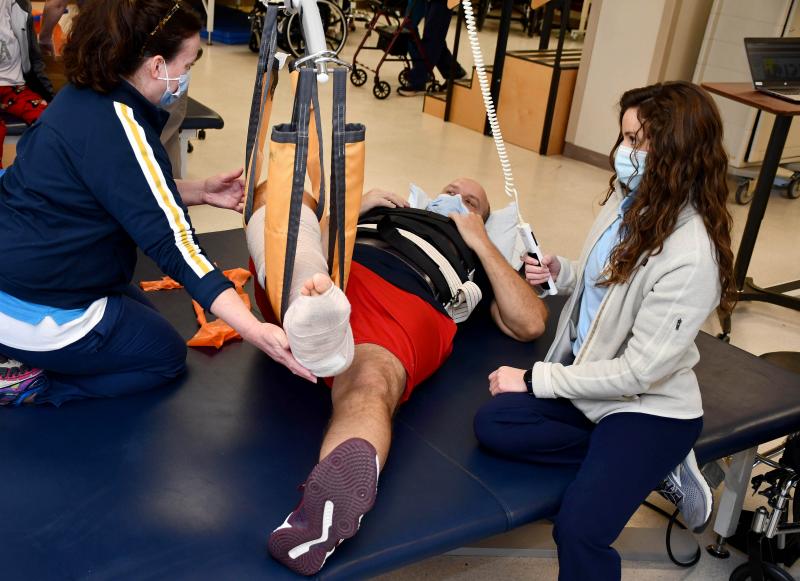 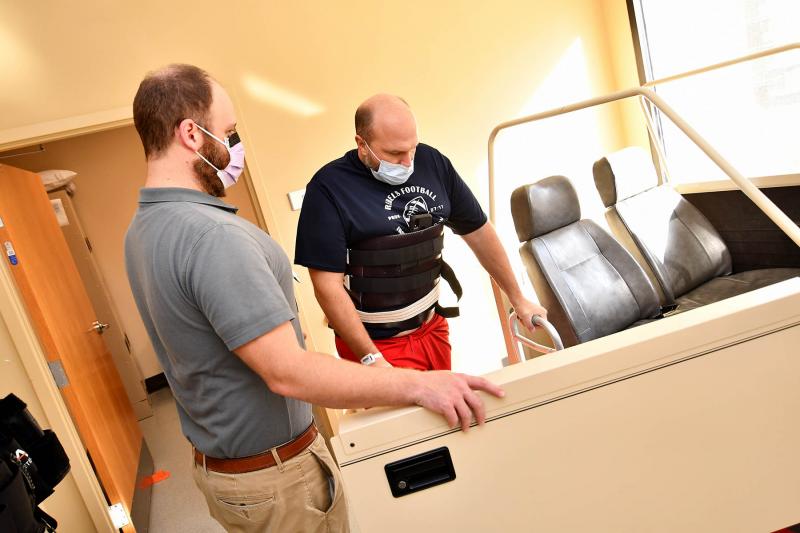 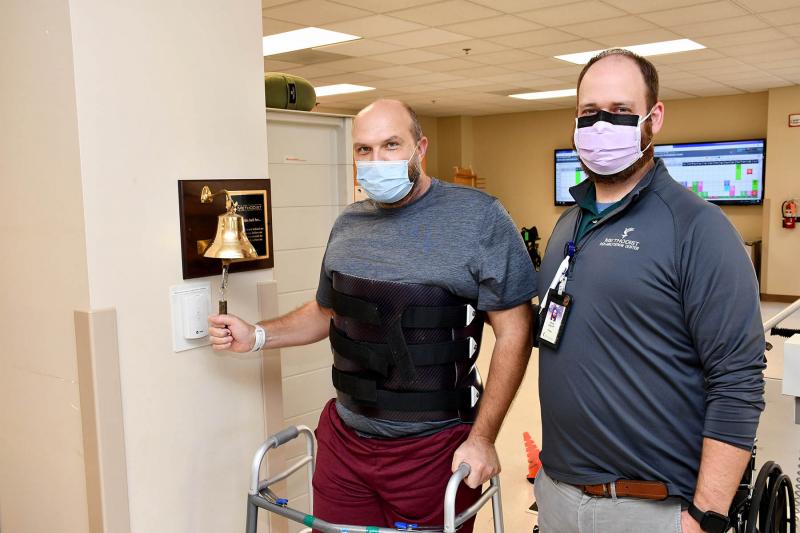 Methodist Rehabilitation Center physical therapist Jacob Long congratulates Jody Jones as he rings the bell to celebrate his last day of therapy at the Jackson hospital.

On Oct. 24, Jody Jones of Flora added irony to injury.

While trying to remove an unsafe tree stand, he fell 22 feet to the ground.

The impact crushed his right heel and fractured his right femur, pelvis and some vertebra in his spine.

Still, Jones feels fortunate. “I don’t know how I landed like I did. I should have landed flat on my back or head,” he said. “The Lord was watching out for me is all I can say.”

Surgery at the University of Mississippi Medical Center in Jackson repaired the major bone breaks. And doctors prescribed a wearable brace to support Jones’ spine until it healed.

To be independent again, the 46-year-old was told he needed a stint at neighboring Methodist Rehabilitation Center, a private non-profit hospital that is affiliated with UMMC.

But he initially fought the transfer.

“I wanted to go home,” he said. “But it was a consensus I was going to have to have extra therapy. There’s no way, shape, form or fashion I was going to be functional at home. I could stand with assistance, maybe a minute. And if I fell, my wife (Heather) couldn’t pick me up.”

Once he became a regular in MRC’s therapy gym, Jones said he realized the value of working with its experienced staff. “It’s a good place with good people who know what they’re doing,” he said. “I have improved every single day, and I could not have done that at home.”

Jones’ physical therapist was Jacob Long, who is a certified assistive technology professional and seating and mobility specialist. And he used his expertise to address pain issues that were thwarting Jones’ ability to give it his all in therapy.

“His right hip hurt a lot,” Long said. So he fit Jones with a power wheelchair. “He could use the power seat functions to get comfortable because it tilts, reclines and can elevate the leg,” Long said.

Over his 17-day stay at MRC, Long began walking again, despite some weight-bearing restrictions on his right side. Initially, he practiced taking steps with the help of MRC’s overhead harness system.

“It has straps that can unweight a limb,” explained occupational therapist Stephanie Lynchard. “We used it early on for more balance and gaining confidence with standing, using a rolling walker and doing wheelchair transfers.”

Soon, he was able to manage without the overhead support.

“Now, he mimics the normal gait pattern with the use of the walker by taking the weight through his arms,” Long said. “His walking has come along nicely, he’s upwards of 400 feet.”

A history of body-building and staying active proved to be a physical advantage in the therapy gym. Mentally, Jones was motivated by his desire to be with his family again.

By the time he left MRC on Nov. 21, COVID-19 restrictions had kept Jones from his 9-year-old son, Henry, for over a month. So he was predicting an emotional reunion.

“When I get home, I’m going to hug my baby boy for a day or two,” he said. “And I’m going to apologize to him because Daddy should have been more careful.”

Jones said he typically wears a safety harness whenever he’s hunting from a tree stand. But he didn’t see the need to put one on for the quick chore of removing a lock-on stand.

“These stands are attached by a chain and most people put a ratchet strap at the bottom for added stability,” he said. “I took the strap off and was going to shake the chain loose and detach it from the tree. Unfortunately, the chain was not connected, and I did not realize it. The strap came loose and I had one hand on the stand and fell backwards.

“When I realized I was falling, I saw the ladder and tree and me moving away. I tried to reach for the ladder and couldn’t get it. My foot hit the ground first and I landed on my side. I knew I was hurt pretty bad.”

Jones was outside Flora, in a heavily wooded area where there was “no good addresses, no good landmarks.”

So he phoned his wife and asked her to send his brother-in-law Brad Franklin to the scene. “She’d have no idea where to tell (rescuers) to come to. He was the only around to know.”

Plus, as a dentist, Franklin had some medical expertise that Jones felt he might need.

Members of the Flora Volunteer Fire Department arrived on ATVs to assess and stabilize Jones. But to get Jones to an ambulance, it took the driving skills of a “daring friend” with a pick-up truck. “They put me on the back of the pick-up and that’s how I got out,” Jones said.

At UMMC, Jones underwent surgery to put a metal rod in his right leg. But he knows it could have been worse. Victims of tree stand falls often suffer serious brain damage or paralyzing spinal cord injuries. And some don’t survive.

According to stats gathered by the Mississippi Department of Wildlife, Fisheries & Parks, there was one fatality among the nine tree stand falls recorded from July 1, 2019 to June 30, 2020. None of the hunters used an attached safety harness, said Captain Megan Fedrick, director of hunter education for the department.

Since July 1, 2020, the department has recorded two tree stand falls, including one fatality. Fedrick said those victims weren’t using the safety device either. (Since Jones wasn’t hunting at the time of his fall, he’s not included in the statistics.)

Jones imagines he’ll return to hunting from a tree stand, albeit the safer model he had planned to install in place of the one he took down. He’ll also wear a harness whenever he climbs and ensure his son understands the importance of safety gear.

“You’ve got to be safe because you may not always get a second chance the way I’m getting one,” he said.