Published on May 3, 2021
by Susan Christensen 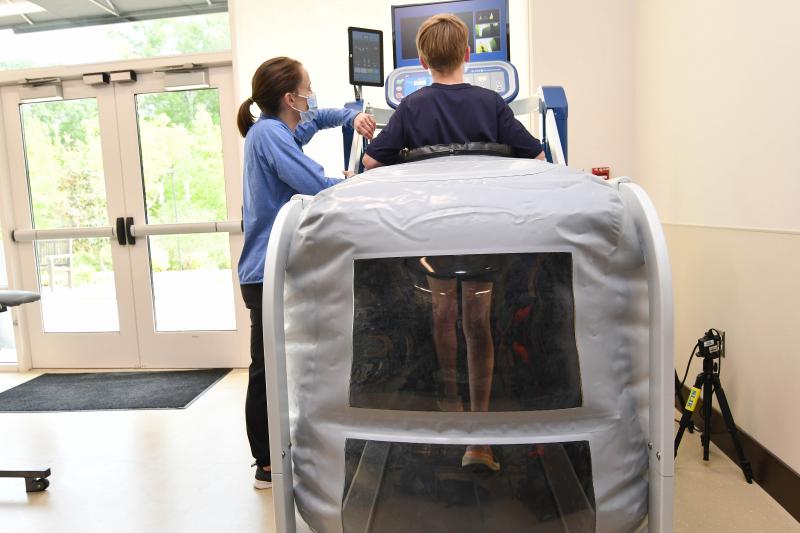 Elizabeth Rich, a physical therapist at Methodist Outpatient Therapy in Ridgeland, shows Cris Hairston how to use the visual feedback system on the AlterG Anti-Gravity Treadmill to see how much weight he carries on each leg. Such input helps him work toward a more balanced gait while walking and running. 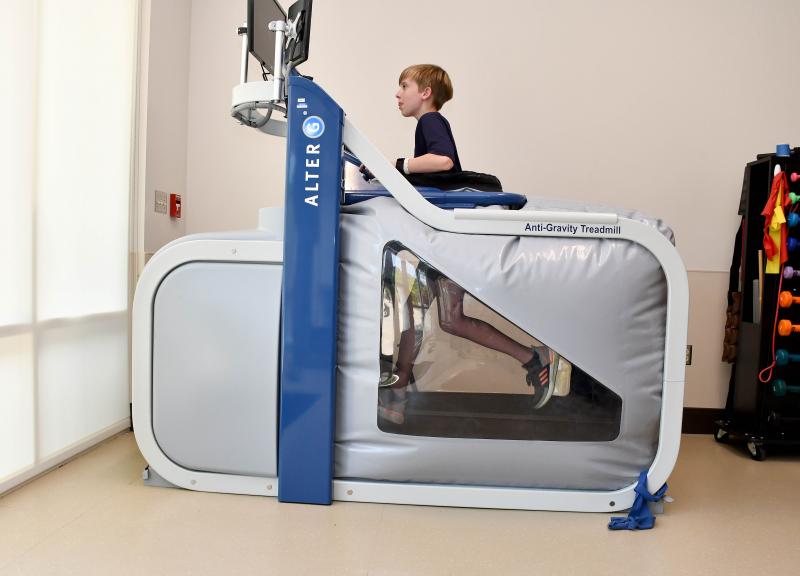 Cris Hairston enjoys running with the aid of the AlterG Anti-Gravity Treadmill. The NASA-inspired treadmill off-loads up to 80 percent of a user’s body weight, allowing athletes an earlier return to walking and running. 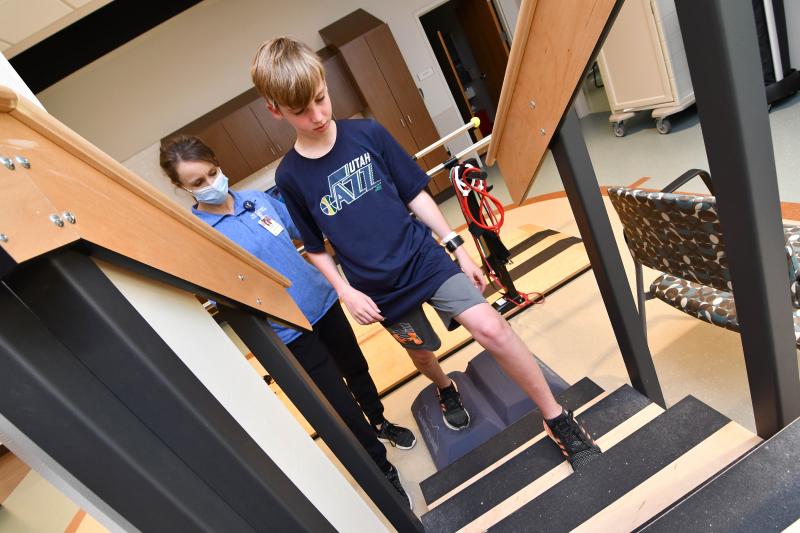 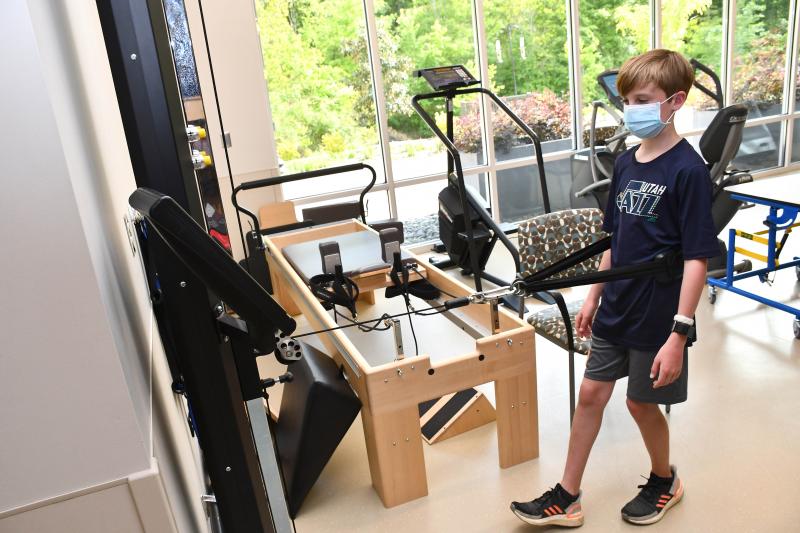 Cris Hairston, who broke his left femur during the February ice storm, walks backward against resistance during an exercise session at Methodist Outpatient Therapy in Ridgeland. The 13-year-old is improving his strength and balance so he can return to mountain biking and soccer.

It was great fun for his family. But Mississippi’s rare sledding weather proved treacherous for some rookie riders.

By afternoon, Wright and three of his colleagues were treating a blizzard of broken bones at Children’s of Mississippi in Jackson.

“I think I fixed about a half-dozen fractured legs in just 48 hours,” said the pediatric orthopedic surgeon.

Among the wounded was 13-year-old Cris Hairston of Madison. On Feb. 13, he was sledding behind a golf cart when he was sent hurtling toward a hefty mailbox in his Grayhawk neighborhood.

“I tried to get off at the last second, but I slammed into it,” he said. “I knew I had broken my leg. It hurt really bad.”

Minutes later, his dad, Kyle Hairston, answered the doorbell and found a group of distraught teens on his porch. “Their eyes were really big, and I could tell something was bad wrong by the look on their faces.”

Kyle arrived at the accident site to find a neighbor who was a nurse practitioner taking charge of the scene. She guided the group as Cris was put on a makeshift stretcher and slid into the back of the family SUV.

Due to icy streets, it took a tense 45 minutes to get to the nearest hospital, which was typically just 10 minutes away.

“They only got one X-ray picture and said this is all we need to see,” Kyle said. It was obvious Cris needed the skilled orthopedic surgeons at Children’s to repair his fractured left femur.

Once he was ready for rehab, there was no question where Cris would do therapy. As an employee of Methodist Rehabilitation Center in Jackson, Kyle knew his son would profit from the seasoned staff and advanced technology at Methodist Outpatient Therapy in Ridgeland.

Today, Cris is close to coming full circle. And physical therapist Elizabeth Rich says his comeback has a lot to do with his can-do spirit. “Nothing has fazed him so far,” she said. “He’s not scared to try new things.”

One of his favorite therapies has been sessions on the AlterG Anti-Gravity Treadmill. The NASA-inspired technology can offload as much as 80 percent of a user’s body weight, providing a means to practice walking and even running early on.

“Anything that takes the weight off is important for getting motion back in the hip and knee—the joints above and below the injury,” Dr. Wright said.

Methodist is the only therapy provider in central Mississippi to offer AlterG sessions. And Dr. Wright feels fortunate that his patients can access the therapy locally.

“I really do like the AlterG because anything that lets the brain start to realize that the leg will heal offers a lot of hope for recovery,” he said.

During AlterG sessions, Cris’s lower body is encased in a waist-high plastic chamber filled with load-lifting, pressurized air. Treadmill controls adjust the pressure, creating a low-impact, workout zone where he can walk or run forward, backward or at an incline.

Through the treadmill’s Stride Smart visual feedback system, Cris is also able to see how much weight he’s carrying on each leg and work toward a balanced gait.

“It helps him get back to running without him having to do full weight-bearing,” Rich said. “He can ease into it.”

“Usually kiddos will stay off the leg about two weeks then gradually go to full weight-bearing in about six weeks,” Dr. Wright said. “Limping is usually gone in about three months.”

Cris got extra stability from having a metal rod inserted in the center of his femur, but that is not a given for all femur fractures.

“There’s a lot of ways to treat them, and the treatment does need to be guided by age and skeletal maturity,” Dr. Wright said.

Such customization is also important during therapy sessions, and Cris’s exercises—which ranged from stair climbing to Pilates sessions—were chosen to address specific goals.

“We want to make sure he can do all he wants to do, and he’s able to progress safely,” Rich said.

Kyle said he’s seen his son come a long way, and none too soon. “He’s not the kind of kid who can sit around and play video games. He likes to be outside. So a few of his therapists have given me ideas of things he can do to heal faster.”

Lately, father and son have been playing disc and regular golf and pedaling on bike paths. And Cris is determined to get back to two favorite pastimes, competitive soccer and being a member of the Mississippi Blues Composite Mountain Biking team.

“He was more upset missing out on mountain bike season than the pain of the accident,” Kyle said.

All in all, Cris said the incident was “pretty scary” and he’s glad he had on a full face helmet to protect his head.

As far as sledding, he has one piece of advice for Southerners taking up the sport: “Make sure there are no mailboxes.”