Published on October 28, 2020
by Susan Christensen 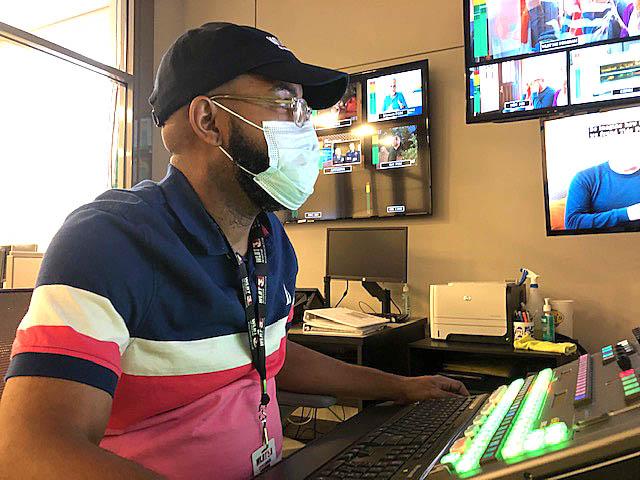 De’Mon McClinton is happy to be back at his post as a technical media producer for WLBT-TV in Jackson. 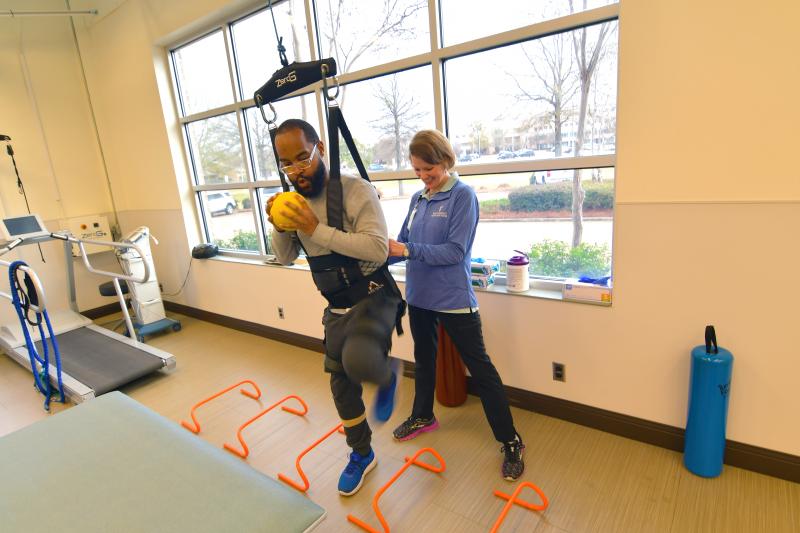 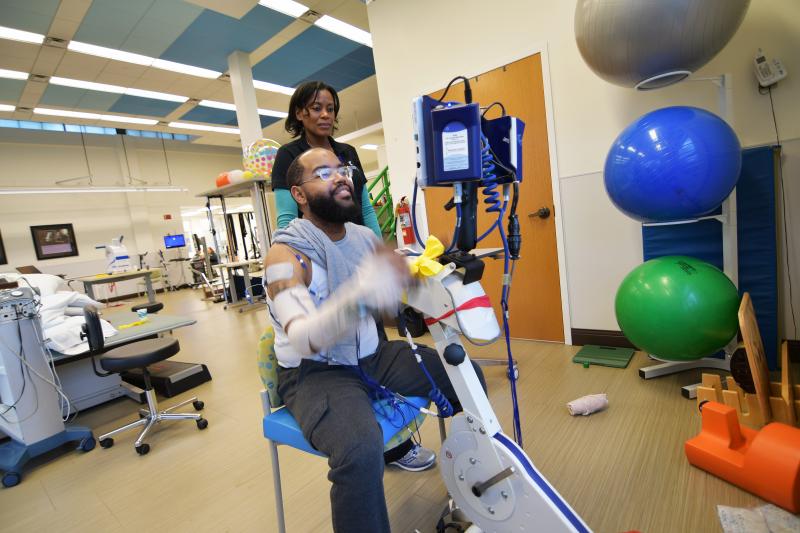 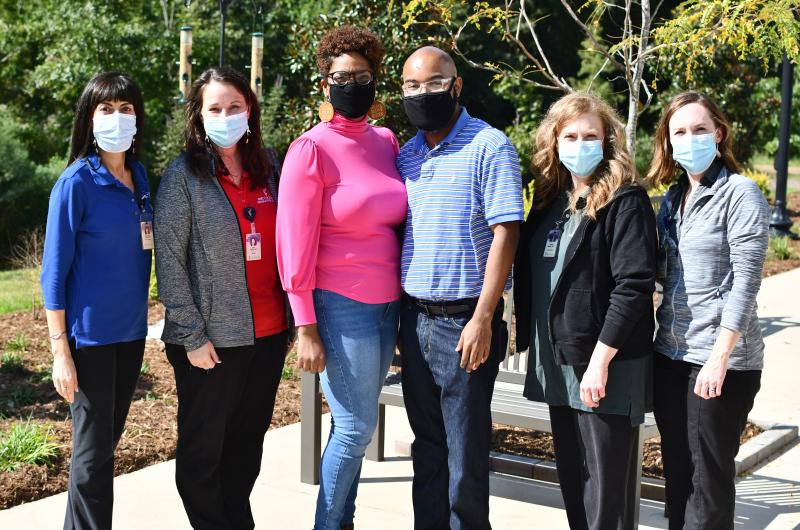 If he’d been by himself at Winner’s Circle Park in Flowood, De’Mon McClinton might have overlooked the odd sensation on his right side.

But since he was alone with his two young sons, he headed home. Now, he hates to think what might have happened if he hadn’t played it safe on July 22, 2019.

Just hours later, what started as a “funny feeling” escalated to a full-blown stroke.

“It could have gone so wrong,” he said. “My right side was affected, from my face to my right leg.”

At age 35, McClinton didn’t expect to be among the 795,000 people who suffer a stroke each year. Like many, he associated strokes with the elderly, not realizing some 25 percent occur in people under age 65.

What’s more, his risk factors put him solidly in the danger zone.

In addition to being African-American with a family history of strokes and heart attacks, McClinton had diabetes, hypertension and high cholesterol. The trio of conditions can constrict blood flow, leading to strokes caused by clotting in the brain.

“I should have been more aware and done things differently,” he said. “Thank God I’m still here and get another chance.”

Today, McClinton feels more like his old self, having recently reclaimed his job as a technical media producer for WLBT-TV in Jackson.

But it was hardly an easy comeback for the Brandon father of Elizabeth, Harper and Conner, now 7, 5 and 3. He spent about 14 months in recovery, much of it in the therapy gyms of Methodist Rehabilitation Center.

After two weeks at MRC’s Jackson hospital, McClinton rolled into Methodist Neurological Rehabilitation in Flowood on Aug, 14, 2019. While he was still in a wheelchair, physical therapist Karen Klein believed he’d be back on his feet again soon.

“He was young and had so much potential,” Klein said. “And we had much to offer to get him back on track to live a normal, productive and independent life, returning to work and being a daddy to his three young children.”

MRC is home to an extensive collection of rehabilitation technology, and McClinton especially benefitted from its ZeroG Gait and Balance System.

Suspended in a harness attached to an overhead track system, McClinton was able to practice stepping, balance tasks, sit-to-stand maneuvers and even climbing stairs without fear of falling.

“We put him in there a lot, which helped his confidence to get his weak leg stronger,” Klein said. “It allowed us to challenge him to get to the next level.”

And once he saw what he could do, McClinton was all in on getting better.

“He would always do more than I wanted him to do, he was so determined to get back to work,” said occupational therapist Tina Weaver. “I’d take it up a notch, and he’d take it up another notch. I don’t think he ever came in here with a bad attitude.”

The device uses low level electrical pulses to activate and re-train muscles. And Weaver said it helped McClinton regain functional use of his hand.

Once he wrapped up therapy in Flowood, McClinton’s progress made him a prime candidate for MRC’s Quest program. Located at Methodist Outpatient Therapy in Ridgeland, the unique service helps survivors of brain and spinal injuries successfully return to work, school or community life.

The program focuses on improving organization, communication and problem-solving skills, as well as overcoming physical impairments. Soon, McClinton had a trio of therapists collaborating on his goal to return to work.

With speech therapist Cassie Means, he focused on everything from improving his memory and language expression to cognitive endurance. “Just like you have to build up your physical side, you have to build your ability to attend longer—how long you can go before exhaustion,” Means explained.

McClinton said his main motivation was making sure he could support his family. And before completing Quest, he even found a position at a convenience store.

To help him adjust to the new setting, he worked with Quest occupational therapist Allison Harris to practice different job skills. “He did lifting and carrying and money exchange,” Harris said. “And he was doing really well.”

But his main goal was to get back to WLBT. And when he managed to find a job there, Means said it was the best thing for him. “It’s always good to go back to something familiar, and he loved that job, the people there and the environment.”

With Quest physical therapist Patricia Oyarce, McClinton continued to work on advancing his walking skills. She focused on improving his balance, strength and endurance, as well as helping him overcome a condition called foot drop.

Another Bioness product came to this rescue, this one offering electrical stimulation for his legs. “It’s a great tool for patients like him,” Oyarce said. “He can use it for specific exercises or for walking.”

A major problem was the out-of-work McClinton couldn’t afford a Bioness for home use. So Quest staff worked with the Mississippi Department of Rehabilitation Services to secure funding.

“We assist anyone with a disability with the goal of returning back to gainful employment,” said LaKeesha Bogan, counselor senior for MDRS. “And he was determined to go back and be a provider for his family. It is amazing and joyful to see his progress because he is so young.”

Looking back, McClinton concedes that his youth might have made him cocky about his stroke risk factors. “I knew I had problems, but I was a bit stubborn,” he said. “This was definitely a big wake-up call.”

“You don’t ever want to see your spouse like that,” said Rosemary McClinton, his wife of nine years. “It really made me stick with my faith. When others said no and others walked away, God said yes. The sky’s the limit if you believe.

“De’Mon has come a long way and worked hard even with being stubborn. I love him, and I’m proud of him.”

McClinton, in turn, can’t say enough about his family support. “My wife and my children were my inspiration. That’s what kept me going.”

And he said it helped immensely to have his mother-in-law, Pinky Johnson, on hand. “She was my rock during the beginning stages,” he said.

“My mother retired to come help us after teaching 38 years. She dropped everything,” Rosemary said.

“I couldn’t even begin to express how much I appreciate them,” he said. “When you feel like you matter to people who are trying to get you back to a certain point, it’s added motivation when you don’t feel like doing anything. It’s the extra kick in the butt you need.”

‘Completely unexpected’: Stroke survivors’ stories illustrate the life-saving importance of stroke awareness
“People don’t think about how important speech is”: Brookhaven man cherishes ability to talk and eat after overcoming voice/swallowing disorders at Methodist Rehab
‘They had me working’: Through inpatient and outpatient therapy at MRC, 28-year-old Trey Carroll gets back to job he loves after a rare type of stroke
Faster and better: Methodist Orthotics & Prosthetics offers free screenings for Bioness L300 Go, an advanced neuroprosthetic device for controlling foot drop
Web design and hosting by U.S.NEXT