Published on January 20, 2022
by Susan Christensen 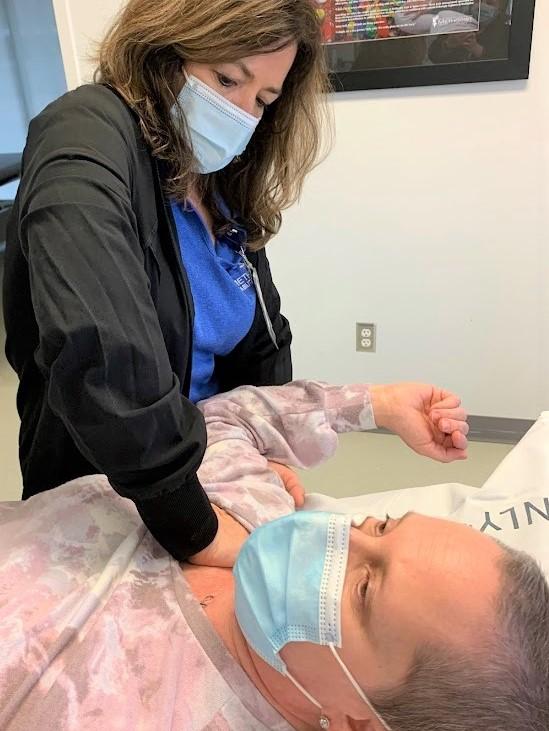 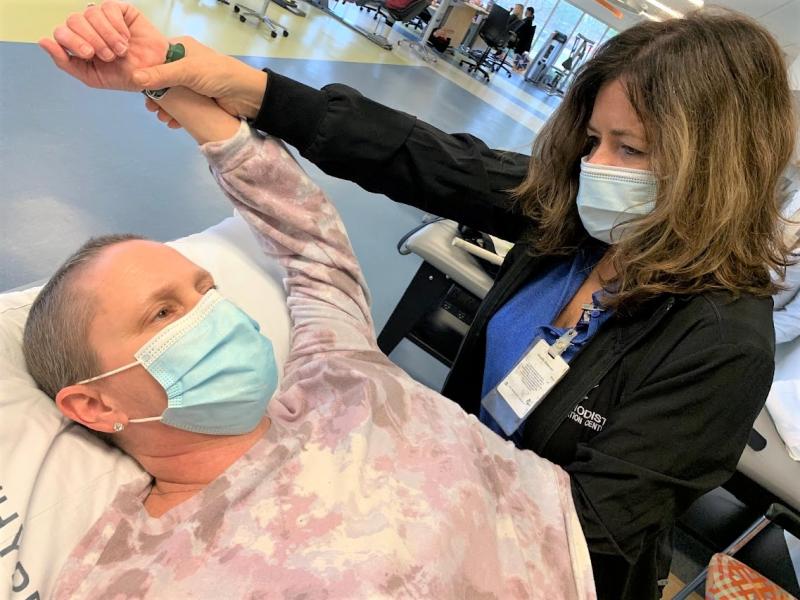 Tiffany Wilson says her surgeon is impressed with the progress she’s made since she began post-mastectomy treatments with physical therapist Teresa Swyers of Methodist Outpatient Therapy in Flowood. And the veteran nurse says she plans to spread the word to other breast cancer patients. “What’s really cool is not only is Teresa helping me, but the thousands I will touch as a nurse in the ER. If I can help get patients here to benefit the way I have, it makes it so much worth it.”

ER nurse Tiffany Wilson of Brandon thought she knew what to expect after being diagnosed with a virulent form of breast cancer on April 12.

But the triple whammy of chemo, radiation and a double mastectomy ravaged her body in ways she never imagined. The normally active 48-year-old spent weeks barely able to move.

“I couldn’t do anything. I wasn’t even able to lie down flat,” she said. “It was like someone wrapped barb wire around my chest and was tightening it. It was unbearable, and I have a pretty high pain tolerance.”

Her doctor recommended physical therapy. So Wilson turned to her daughter-in-law Adrienne Brumfield for advice.

Brumfield is an occupational therapist at Methodist Outpatient Therapy in Flowood. And she immediately thought of coworker Teresa Swyers. The veteran physical therapist is trained in myofascial release, which helps many patients overcome the pain and loss of function related to breast cancer treatments.

The hands-on therapy targets fascia, which is the thin, membrane that surrounds and protects every type of muscle tissue. When it becomes constricted, “it causes excruciating pain and limits all aspects of self-care,” Swyers said.

Fascial problems can be a particular risk for patients like Wilson who opt for reconstructive surgery following mastectomy.

“Some muscles have been cut and some stretched to their limits to replace the ones that have been removed,” Swyers said. “That in addition to expanders create tremendous tightness and pressure on soft tissue.”

“Anybody else can barely touch around my scars,” Wilson said. “Teresa is the only person who can touch them and it feels like all that tension is released. If it wasn’t for her, I still wouldn’t be able to use my arm.”

Because it soothes pain and fosters normal body alignment, myofascial release can be a first step toward more typical therapy activities.

“A lot of times pain is the limiting factor for other aspects of therapy,” Swyers explained.

Once Wilson was more pain-free, she moved on to strengthening and stretching exercises designed to make her more independent.

“I had no upper body strength to get myself up when I laid down,” she said.

Now, she says her surgeon is “majorly impressed” with her progress. And she feels closer to becoming “the woman I was before all this happened.”

“Before, I couldn’t bathe myself, wipe myself, couldn’t fix food,” Wilson said. “A couple of days ago I got a glass off the second shelf of a cabinet by myself. And I drove my car today for the first time in six or seven months.”

After nearly two months of therapy, Wilson said she still looks forward to it. “I feel like I’ve accomplished something because I feel better when I leave,” she said.

It’s a stark contrast to how she felt at first.

“You are beaten down and feel like all these things have been taken from you,” she said. “Praying and staying positive got me through this. I look at every single day in a new light.”

“My grandmother had breast cancer and a double mastectomy, and she lost the use of both of her arms. I wish Granny had had Teresa as a therapist.”

“What’s really cool is not only is Teresa helping me, but the thousands I will touch as a nurse in the ER. If I can help get patients here to benefit the way I have, it makes it so much worth it.”