“I was getting more afraid”

Published on January 26, 2022
By Susan Christensen 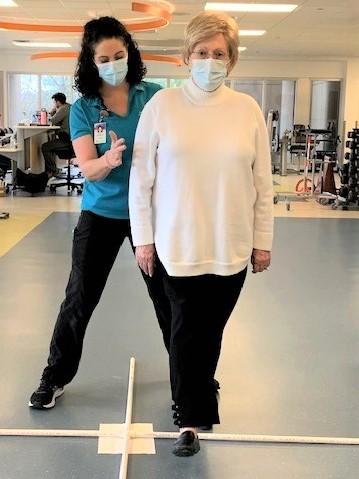 Sara Batia of Brandon practices balance exercises with Lana Bernier, a physical therapist at Methodist Outpatient Therapy in Flowood. Bernier is certified competent in rehabilitation of the vestibular system, which includes organs involved in balance, posture, movement and spatial orientation. 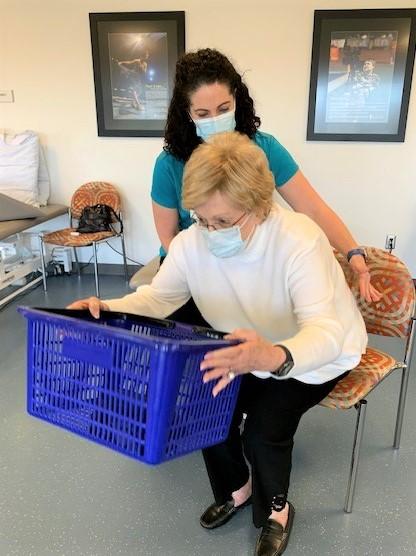 Lana Bernier, a physical therapist at Methodist Outpatient Therapy in Flowood, guides Sara Batia of Brandon in the mechanics of rising from a chair while holding a basket. Such exercises are designed to mimic balance maneuvers that are part of a patient’s everyday life.

Every time she fell and didn’t hurt herself, 71-year-old Sara Batia of Brandon brushed off her balance problems.

Then a dizzy spell on her front porch caused a brain-rattling fall.

“I ended up with a concussion,” she said. And the retired nurse realized she couldn’t ignore her unsteadiness any longer.

“I was getting more afraid,” she said. “My mom had two friends die from falls.”

According to the Centers for Disease Control, more than 800,000 patients a year are hospitalized with fall injuries, most often due to a head injury or hip fracture. The number of U.S. patients who die from such injuries jumped 30 percent from 2007 to 2016.

Bernier underwent specialized training to be certified competent in rehabilitation of the vestibular system, which includes organs involved in balance, posture, movement and spatial orientation.

Bernier said people fall more as they age due to a variety of conditions. These include muscle weakness, nerve damage in the feet, changes in the inner ear or vision, reduced flexibility of joints and tendons due to arthritis, neurological impairments, balance and mobility problems, heart disorders and postural hypotension, a dizzying drop in blood pressure when you sit up or stand.

That’s why each vestibular evaluation begins with a thorough patient history to pinpoint areas of concern.

Such descriptions can offer a clue to the root of balance problems. Feeling faint, for instance, can indicate drops in blood pressure or blood sugar, dehydration, medication side effects or heart disease complications.

The Vestibular Disorders Association says BPPV is the most common disorder of the vestibular system. It causes about half the dizziness experienced by people over age 50.

BPPV happens when calcium crystals in the inner ear become displaced. It’s treated by putting patients through a set of positional tests to confirm the diagnosis and pinpoint the affected area of the inner ear.

Based on the patient’s symptoms, vestibular physical therapists then select the best repositioning maneuver to return calcium crystals to their proper place. And while it helped Batia, it was not a cure-all.

She still needed help to improve her walking ability. “For a long time, I would veer off to the right and the left, and I would not be comfortable walking with anybody,” Batia said. “I’ve been running into people for years.”

To put Batia on the path to recovery, Bernier evaluated her physical capabilities to decide the best therapies to address her problems.

“We work through a general leg strength and flexibility assessment and look at how patients use their sensory systems for stability,” Bernier said. “I try to determine which situations make balance worse or better.”

In Batia’s case, hip pain and weakness, along with arthritis in her back, had taken a toll. Her walking was also affected by diabetes-related nerve damage in her feet.

“It’s not a cure for neuropathy, but it has been shown to give symptom relief even up to a week after using it,” Bernier said.

Strengthening and flexibility exercises were also part of Batia’s therapy, as well as plenty of walking practice.

As she paced the therapy gym, Batia was often given something to carry. “It makes it more like what you do in real life when you have a cup or cell phone in your hand,” Bernier said.

Batia also worked on gaze stabilization, as eye movement is essential to many walking maneuvers.

“With the normal pattern of movement, the eyes start to look in the direction of a turn which gives you stability,” Bernier said. “But with people who are in pain and worried about falling they look down more.”

“When I have to go the grocery store or anywhere else, I’m able to get around better,” she said. “Before, I was to the point of walking into walls or other people.”

Batia now tells others dealing with dizziness or other balance problems to consult with someone who is specially trained in vestibular disorders like Bernier.

“I know she has been wonderful to me,” Batia said. “I don’t think I would be where I am today if I had not gone to Methodist Outpatient Therapy.”