Published on March 9, 2022
By Susan Christensen 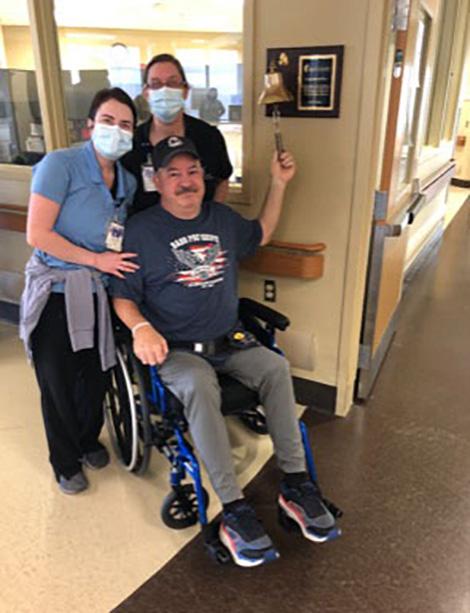 On his last day of therapy at Methodist Rehabilitation Center, Michael Chambless rang the bell to wrap up his inpatient stay at the Jackson hospital. Cheering him on are, from left, occupational therapist Anna Leigh Hanna and physical therapist Kathleen Dobbs. 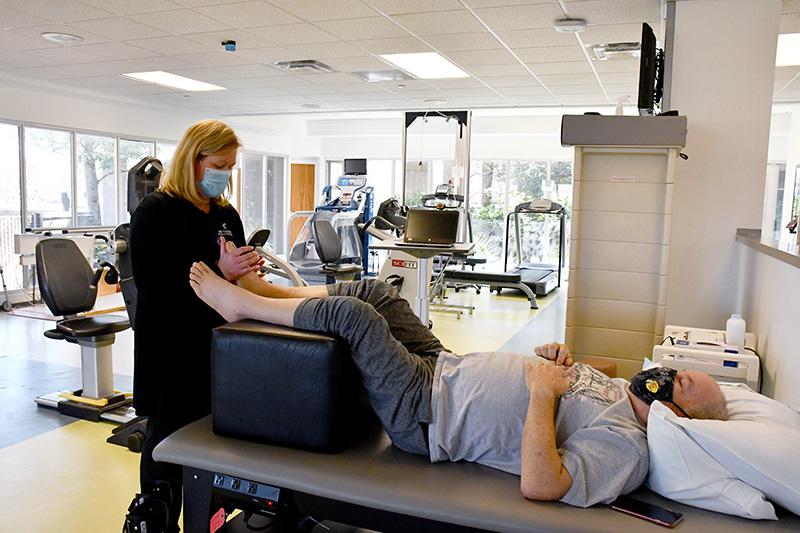 Amy Burge, a physical therapist at Methodist Outpatient Therapy in Flowood, works to improve the range of motion in Michael Chambless’ feet. 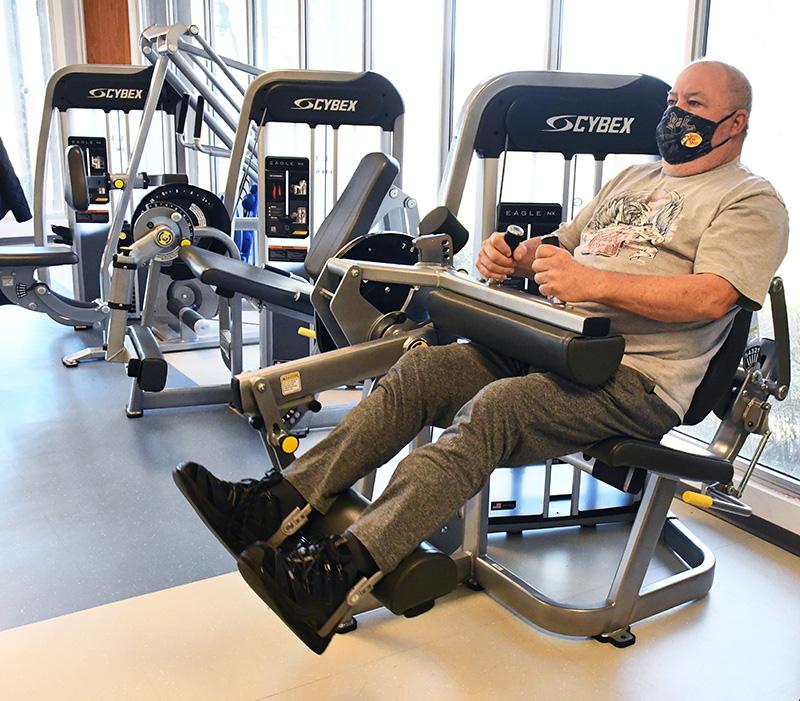 Michael Chambless said COVID left him “as weak as pond water.” To regain his strength and endurance, weight training is part of his recovery program at Methodist Outpatient Therapy in Flowood.

Michael Chambless of Brandon remembers nothing of his 23 days in ICU fighting COVID.

But he does recall his brother, Danny, telling him how bad it had been. “He said he’d take a COVID booster every month to avoid having COVID like I did,” said the 60-year-old.

“The last day I was on a vent, the doctor told my sister I had a 50-50 chance. They were already making plans for my funeral.”

The news alarmed the many athletes who know him as Coach Cham. During a 35-year career that included multiple state championships, he led baseball, football, fast-pitch softball and girl’s basketball teams at schools in Clinton, Richland and Carthage.

In May, he finished a fast-pitch softball season at Pelahatchie High School. For the last nine years, he’s also worked as a greeter for Bass Pro Shop in Pearl.

He was there on July 23, when a coworker told him: “You don’t look good.” So his brother drove him to a nearby medical clinic.

“He waited in the car and saw an ambulance pull up to the clinic,” Chambless said. “He got to where he could see the patient and it was me. They took me straight to St. Dominic Hospital, and they kept me alive.”

He was discharged 24 days later and hoped to move to Methodist Rehabilitation Center in Jackson. The research and rehabilitation hospital had already treated more than 130 post-COVID patients and had begun an outpatient Recovery After COVID Clinic.

MRC was also a first choice because of occupational therapist Bonnie Lahuta. She and her family had been close friends with Chambless since he’d coached her in sixth-grade softball.

Lahuta knew Chambless would benefit from MRC’s intense 18 hours of therapy each week and its growing COVID expertise. So she’d been keeping him on the radar of the hospital’s admissions team.

Still, she had some reservations about his readiness for the rigors of rehab.

“I know how intense he is,” Lahuta said. “And I was concerned with whether his body would hold up to the demands he would put on it. He’s the most determined person I’ve ever been around.”

As it turned out, Chambless was deemed too weak to transfer to MRC right away. So he spent 70 days recouping at KPC Promise, a long-term acute care facility in Vicksburg.

It was there that Chambless first checked his phone after six weeks of being incommunicado. And it began dinging like a winning slot machine. “It sounded liked I’d won a jackpot from all the texts I got,” he said. “It took me two days to answer all of them.”

He certainly needed the support. By the time he arrived at MRC on Nov. 1, he’d lost 70 pounds, couldn’t walk and was “as weak as pond water.”

“But he had the drive and motivation to get better, and that’s always half of the battle,” said MRC occupational therapist Anna Leigh Hanna.

Like many COVID patients, Chambless had to get back to the basics. “He had to learn to get out of bed and stand and transfer to a wheelchair,” said MRC physical therapist Kathleen Dobbs.

Such activities were affected by his weakened muscles and low cardiovascular endurance. “I had been strong as a bull all my life and here I am doing 2.5 pound weights and struggling,” Chambless said.

Chambliss also can’t lift the front of his feet due to damage to the nerve that stimulates the foot muscles. Known as foot drop, the condition can be caused by virus-related neurological injuries or prolonged immobility while in critical care. His case is further complicated by ankle contractures and calf tightness. “His muscles weren’t activating and his range of motion was significantly limited,” Dobbs said.

Nevertheless, when he exited inpatient rehab on Nov. 24.—just in time to be home for Thanksgiving—Chambless felt he’d made “leaps and bounds.”

“MRC really hammered everything good,” he said. “Kathleen and Anna Leigh worked my butt off. And they worked what needed to be worked. I’ve had great nurses, doctors and therapists who have helped me through this.”

Today, Chambless is continuing his comeback at Methodist Outpatient Therapy in Flowood. He’s hoping to walk again without the aid of what he jokingly calls “my Forrest Gump shoes.”

The shoes attach to a pair of braces custom-built by Methodist Rehab certified orthotist Willie Spann. Their support means Chambless can move about without a wheelchair. “I can put my shoes on and get my walker and go to town,” he said.

Chambless is now focused on the abilities he’ll need to stay active. To improve his strength and endurance, he does weight training and walking exercises with physical therapy assistant Wes Myers.

To address the foot drop, he also does sessions on the ReBuilder. Physical therapist Amy Burge said the electrical stimulation device helps with nerve regeneration. For home use, he also has a DynaSplint System, which is a gentle stretching device that helps increase joint range of motion.

At home, Chambless relies on the help of his family. His brother lives with him and his sister, Lee Ann Boykin, resides next door. And he’s grateful for their assistance.

Chambless hopes his experience with COVID is a cautionary tale for others. Since he’d never had a flu vaccine and managed to dodge the flu, he felt he didn’t need a COVID vaccine.

Now, forgoing the shot is his biggest regret. “If I could go back to the first time they said they had the vaccine, I’d be lined up to get it,” he said.