Published on July 11, 2022
By Susan Christensen 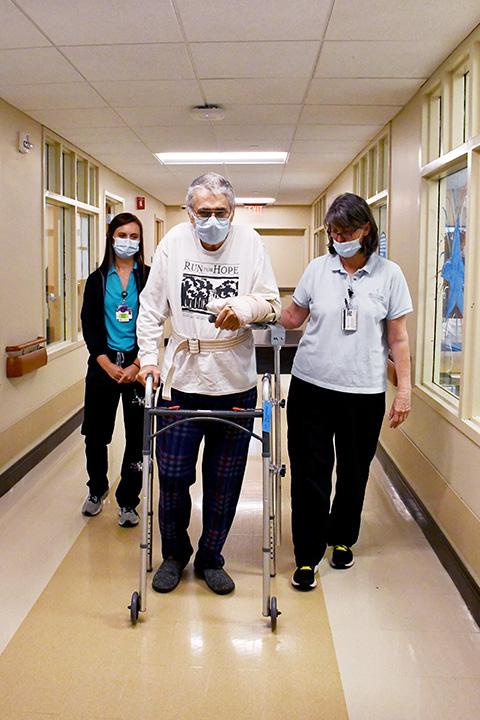 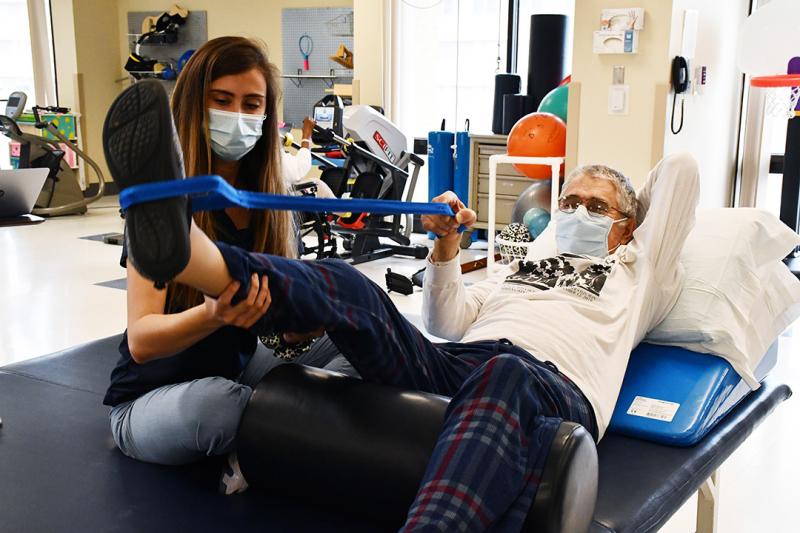 Mia Tynes, an occupational therapist at Methodist Rehabilitation Center, works with Wallace Strickland as he strives to overcome injuries suffered in a May tractor accident.

So at age 74, it seemed rookie mistakes were surely behind him.

Then came May 3, the day he admittedly “went stupid.”  While driving downhill on his 450-acre Decatur farm, he lost control of the tractor as it sped up. He clipped a tree and the 8,800-pound vehicle tipped over on top of him.

Trapped underneath, Strickland worried he wouldn’t be rescued.

“I was in a place where I don’t usually have cell service, and I was allowed to make three phone calls. That’s divine intervention,” he said.

In another stroke of good fortune, someone who heard the emergency call had a piece of needed rescue equipment already loaded up. “He made it in 13 minutes to my house,” Strickland said.

It took 45 minutes for rescuers to free Strickland. And he’s grateful for the volunteer first responders who risked their own safety to help him.

“I remember one volunteer, John, was crawling under the tractor to shore it up, and I begged him not to five or six times,” Strickland said. “Afterwards, he even checked on me every other day.”

Strickland cracked two ribs, broke another, fractured his left thumb and severely injured his hip socket and pelvis. For a man who prided himself on staying healthy, it was humbling.

In his whole life, Strickland had only spent two days hospitalized. Still, he knew more than most about health care. He recently retired as long-time CEO of Rush Health Systems and is now board chairman.

So as he pondered where to go to overcome his injuries, Methodist Rehabilitation Center in Jackson immediately came to mind. “Its reputation is such across the state, it is the place to go for rehab,” he said.

Strickland’s “totally reconstructed pelvis” made him unable to bear weight on his right leg. He also had limited use of his left hand.  But his therapists taught him how to work around his lopsided abilities.

“He had to put all his weight on his left leg and brace himself with his right arm,” said MRC occupational therapist Mia Tynes. “It was tricky.”

“But once he got used to it, he took off,” said MRC physical therapist Mary Smith. “It just took a little bit of time before he realized he had control.”

After a couple of weeks focused on strength, balance, endurance and compensatory techniques, Strickland headed home feeling grateful to staff for helping him make “tremendous progress.”

“I can stand up and move from bed to wheelchair and wheelchair to bed, and I have walked 150 feet,” he said upon his discharge on May 27. “They taught me all that, and it’s so nice to have someone teaching you things you need to know.

“The staff is outstanding. Even the lady who does the housekeeping, we would chat, chat, chat as she did her job. She was just so nice.”

At first, Strickland had simple goals for his recovery. He wanted to go to the bathroom independently and be able to sleep on his side.

In the future, though, he hopes to get back to farming. He’s got cows, chickens, donkeys and a thriving vegetable garden that need his attention.

He says his accident taught him he had some bad habits to overcome. He believes his mistake on May 3 was not putting his tractor in four-wheel drive. “If I’d put it in low gear, I would have creeped down that hill,” he said.

The tractor had a Roll Over Protection System (ROPS), but Strickland neglected to use a vital component—his seatbelt.

His wise words to others is: “You need to not put yourself in the position to be injured or even killed. And at a certain age, there are probably things you shouldn’t do no matter how well you think you can do them.”

“We hear that over and over,” said John Hubbard, senior safety specialist for the Mississippi Farm Bureau. “They say I knew better and I took a chance and the chance cost me.”

Hubbard said it’s fortunate that some farmers like Strickland are willing to share their stories to help others avoid the same mistakes.

“They realize they messed up and don’t want anybody else to go through what they’ve gone through. And my hat is off to them,” Hubbard said. “They take something bad that happened and turn it around to save lives.”

How to Avoid Tractor Rollover Accidents

“It’s a whole new world” Rehab strategies address depression faced by 30 percent of stroke survivors
Methodist Rehab CEO announces retirement, board names new leaders
“For a patient like Reece, it was time for a place like MRC” - physical therapist, Joe Jacobson, director of outpatient rehabilitation Teenager with congenital condition chooses Methodist Outpatient Therapy for post-operative care and assistive technolo
‘Truly a miracle’ Fitness instructor reclaims career with help of Methodist Rehab stroke-recovery program
'Right after the amputation, things started getting better' National Guardsman chooses amputation to save his life and independence after traumatic car crash
“Spinal cord injury care begins at the scene” Methodist Rehab physician says rescuers helped Delta farmer avoid paralysis after truck v. tractor crash
“I had a 50-50 chance” After surviving COVID, veteran coach works on comeback with help of Methodist Rehab therapists
“I can walk normal and do what I want to do” Flowood clinic joins global launch of powerful prosthetic knee
“I was getting more afraid” After brain-rattling fall, retired nurse works with balance expert at Methodist Outpatient Therapy to reduce risk of serious injury
“Like someone wrapped barbed wire around my chest” Brandon nurse finds relief from post-mastectomy pain via hands-on therapy
Web design and hosting by U.S.NEXT